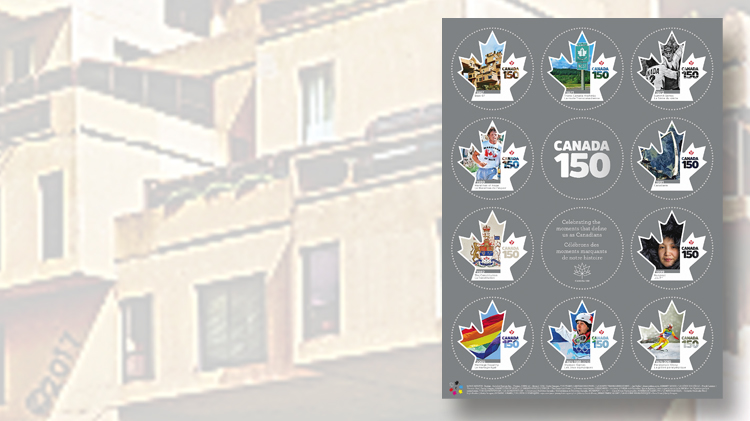 The water-activated Canada 150 commemoratives were issued in panes of 10 with the stamps in perforated circles 1.77 inches in diameter. 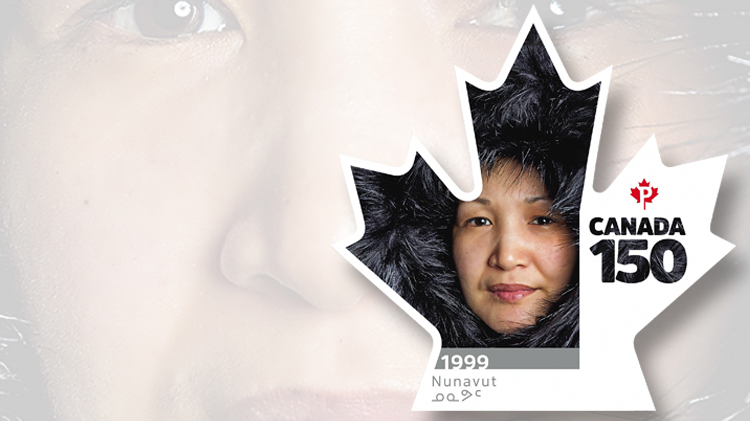 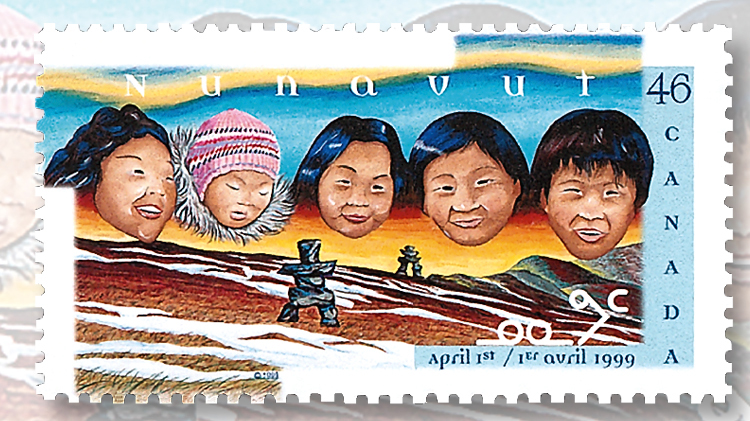 The inscription on the Nunavut stamp issued April 1, 1999, includes the rendering of the territorial name in the Inuit language of Inuktitut, in which Nunavut means “our land.” 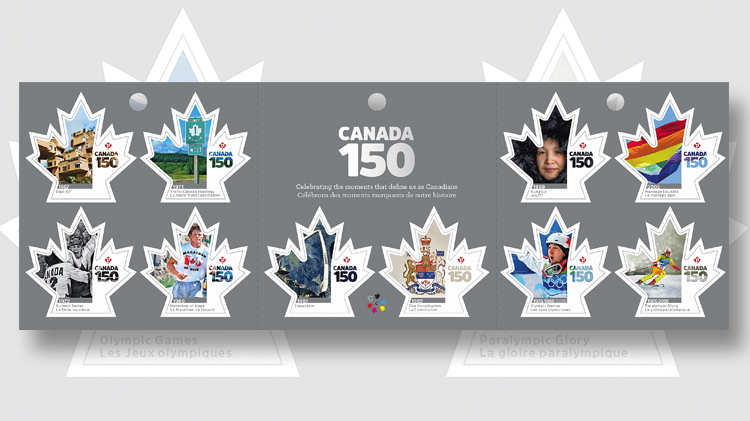 The self-adhesive booklet of 10 of the maple-leaf-shaped Canada 150 stamps issued June 1. 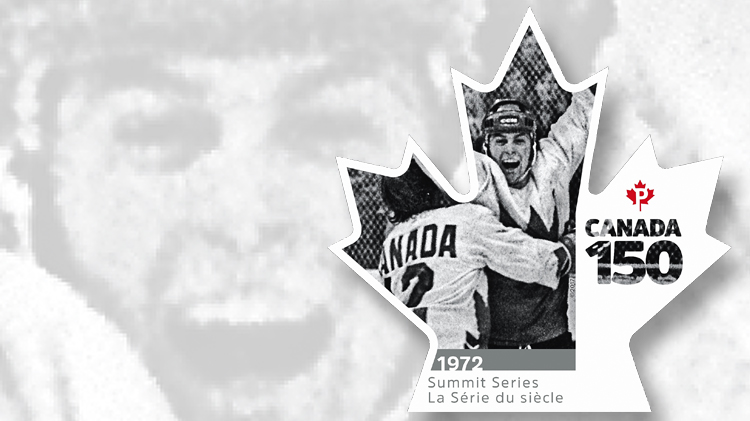 Unveiled May 31 in Winnipeg, Manitoba, the eighth of 10 stamps in the Canada 150 series pays tribute to hockey’s iconic 1972 Team Canada and its hard-fought victory over the Soviet Team in the final game of the Summit Series. The stamp depicts the famous 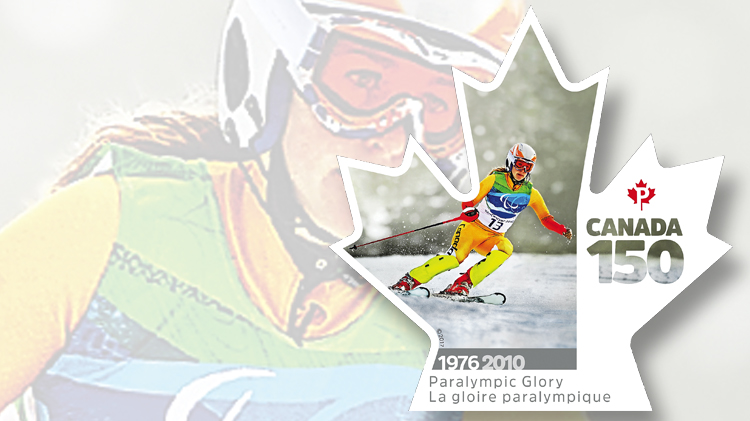 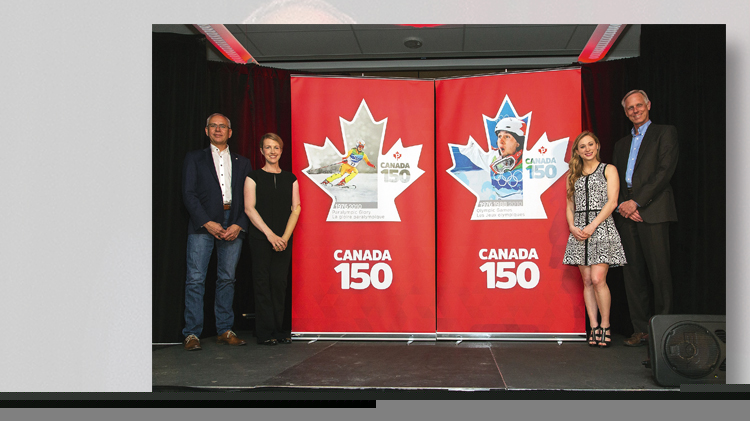 The last two designs in the 10-stamp Canada 150 issue were unveiled June 1 in Richmond, British Columbia, the day the set was put on sale. At left, Paralympic legends Arnold Boldt and Lauren Woolstencroft unveil a stamp celebrating Canada’s role as host o 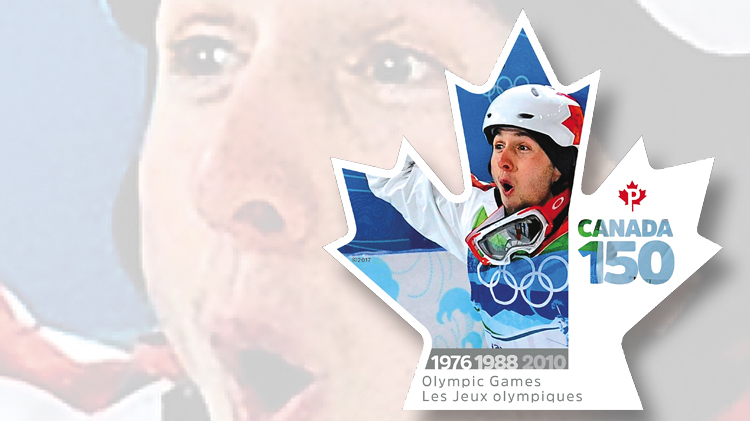 Shown on the Canada 150 stamp honoring three Olympic Games hosted by Canada is skier Alexandre Bilodeau, the first Canadian to win Olympic gold on Canadian soil in the men’s moguls event at the 2010 Vancouver Winter Olympics.
Previous
Next

On June 1, Canada Post completed its marathon unveiling of stamps that began on April 28, revealing the final two stamps in its 10-stamp Canada 150 issue.

These two maple-leaf-shaped stamps honor the national commitment to amateur athletics and Canada’s success in hosting the Olympic Games and Paralympic Games. Both stamps were unveiled at a ceremony held at Canada Post’s Pacific Processing Centre in Richmond, British Columbia.

Another sports-related unveiling was held May 31 in Winnipeg, Manitoba, paying tribute to the legendary 1972 Team Canada hockey squad that took on the mighty national team of the Soviet Union during the height of the Cold War, in what was known as the Summit Series.

Also, the previous day, May 30, Canada Post unveiled the Canada 150 Nunavut stamp at the legislature in Iqaluit, the capital of Canada’s newest, largest territory.

The stamps in the Canada 150 issue honor important persons, places, and events that have occurred since Canada’s centennial year of 1967.

The previous unveilings were reported in the following issues of Linn’s: Expo 67 (May 22, page 16), the Constitution and the Canadian Charter of Rights and Freedoms, Canadian Innovation/Canadarm and Marriage Equality (May 29, page 10), Trans-Canada Highway (June 5, page 10); and Marathon of Hope (June 12, page 17).

All of the Canada 150 stamps were issued June 1. Each stamp is nondenominated “P” stamp, paying the first-class domestic rate.

Lauren Woolstencroft, a former para-alpine skier and the first Canadian winter Paralympian to win five gold medals at a single Games, is featured on the Paralympic stamp.

The photo won a National Newspaper Award and was named Canadian Press photograph of the year.

In its Details magazine for collectors, Canada Post summed up the Summit series, “It was a Cold War battle on ice, an emotional roller coaster ride for the country — and like no other hockey series before or since.”

The stamp celebrating the establishment of Nunavut as a territory of Canada on April 1, 1999, shows Ejangiaq Kines of Arctic Bay, Nunavut, an Inuit hamlet on the Borden Peninsula of northern Baffin Island in the Qikiqtaaluk region of Nunavut, about 500 miles north of the Arctic Circle. Her husband Clare Kines took the photograph.

Nunavut means “our land” in the Inuit language of Inuktitut, and is inscribed in that language below “Nunavut” in the stamp design.

Carved out of the central and eastern regions of the Northwest Territories, Nunavut is now the largest province or territory in Canada, at 787,155 square miles.

A quarter century of negotiations by various Inuit groups preceded the 1993 Nunavut Land Claims Agreement with Canada’s federal government and that of the Northwest Territories, which laid the foundation for the creation of the territory of Nunavut on April 1, 1999.

On the day the territory was created, Canada Post issued a 46¢ commemorative (Scott 1784), the first stamp to display the name of the new territory in both the Latin alphabet and in Inuktitut.

Roy White and Liz Wurzinger of Subplot Design Inc. in Vancouver, British Columbia, designed all 10 of the Canada 150 stamps. Each stamp measures 40 millimeters by 40mm each.

They were printed by the Lowe-Martin Group using six-color lithography, as self-adhesives in a booklet of the 10 different designs (Canada Post product number 414048111), and with moisture-activated gum in a pane of 10 (404048107).

In the pane of 10, the maple-leaf framed designs are surrounded by a light gray background and a circle of perforations 1.77 inches (45mm) in diameter.

A total of 10,000 packs of 10 official first-day covers, one for each stamp design and each cancelled in Ottawa, also are available, each with an overall design and featuring details of the background and rationale for each stamp on the reverse (414048131).