Check out these clever look-alike U.S. stamps of an earlier era 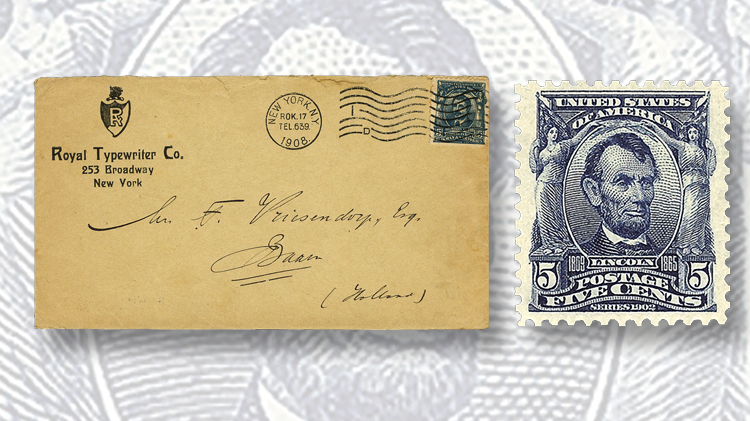 The United States Post Office Department lost 5¢ in revenue on this cover sent to Holland, bearing a look-alike replacement for the then current 5¢ Lincoln stamp. 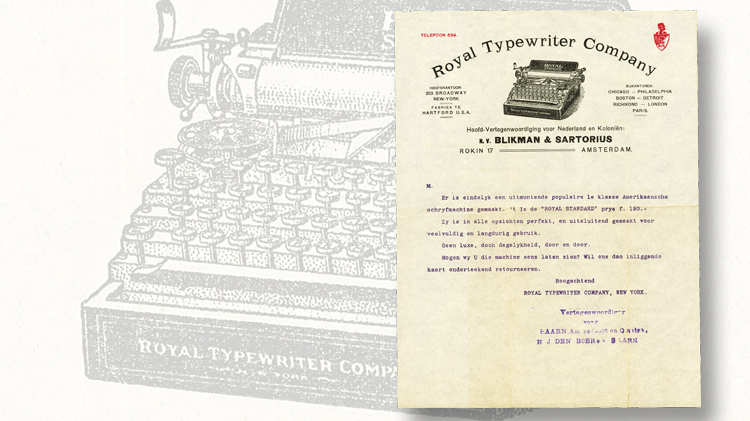 The cover sent from New York to Holland contained a letter from the Royal Typewriter Company written in Dutch. 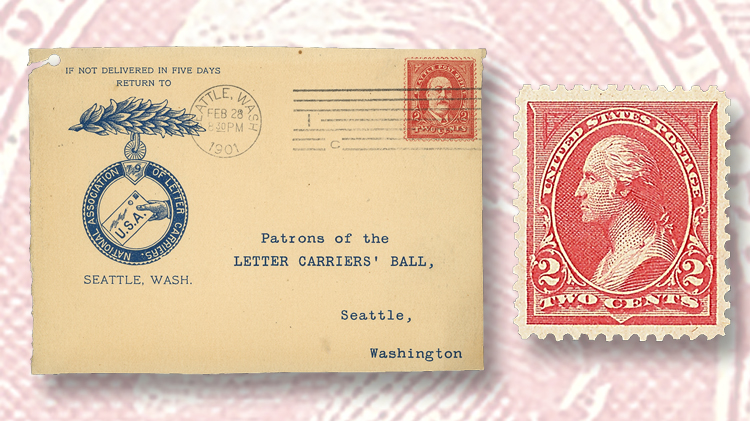 No revenue was lost on this envelope look-alike. It is an invitation for the Letter Carriers’ Ball, made up to look like a mailed letter. It features an imitation of the 1894 2¢ Washington definitve stamp.
Previous
Next

If there were a prize for the best imitation of a United States stamp, a contender would be the example on the 1908 cover from the Royal Typewriter Co. in New York.

It successfully mimics the 5¢ Lincoln of the 1902 issue (Scott 304). It was successful in that it was accepted as genuine international-rate postage on the cover sent from New York to Holland.

Instead of the genuine inscriptions at the top, the imitation reads, “Royal Typewriter Cy. Agenten Vook,” and the individual shown — who doesn’t look like Lincoln at all — is labeled “Rokin” with three numbers that are obstructed by the cancellation.

Inside the envelope is a typed letter, in Dutch, that appears to be an ad for the Royal Typewriter Co.

The cover is shown courtesy of Richard Drews.

These days instead of imitations, we see actual counterfeits, which lack the creativity of the older imitations, but are equally likely to make it though the mail.

Another imitation from a bit earlier than the 1902 series is a takeoff on the 1894 2¢ Washington. However, this invitation to the 1901 Letter Carrier’s Ball, sponsored by the National Association of Letter Carriers branch in Seattle, Wash., didn’t go through the mail.

Who is the man pictured on the stamplike label? While not named, he is probably the president of the local association.

This sort of thievery of stamp designs was not unusual in the late 19th and early 20th century. A complete collection is probably impossible because we don’t know all of what exists, but I find such items fascinating reflections of a bygone era, and am always glad to find new examples.