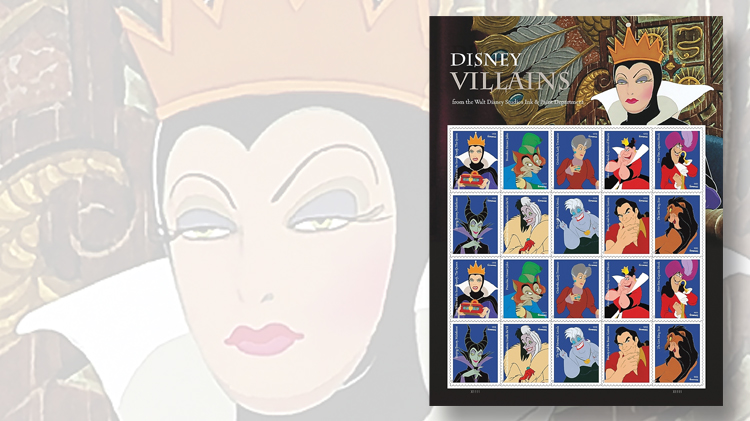 Ten Disney villains will be featured on forever stamps in a pane of 20 that will be issued July 15. 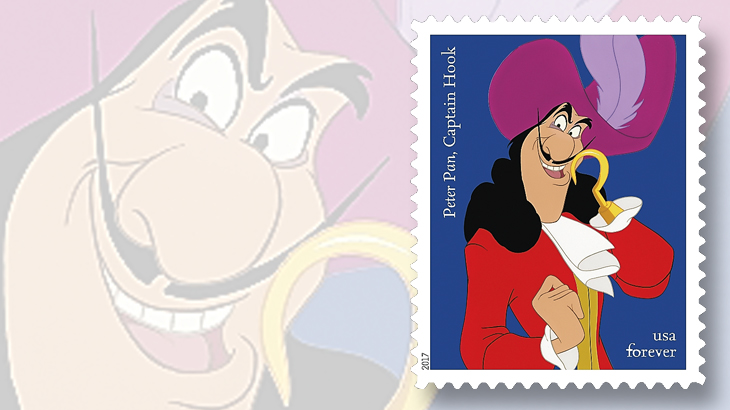 The conniving Captain Hook from the 1953 Disney animated film Peter Pan is one of 10 Disney villains to appear on new stamps in July.
Previous
Next

The Disney Villains stamps will be issued in a pane of 20 July 15 at the Anaheim Convention Center, Anaheim, Calif. A 1:30 p.m. first-day ceremony is scheduled during the Disney fan event D23 Expo 2017.

“Admission is limited to the ceremony that is standing room only,” according to the Postal Service. “You may RSVP at usps.com/disney; however, this does not guarantee admission. Additional instructions will be provided. D23 Expo 2017 ticket holders do not need to RSVP.”

Each stamp in the set depicts a classic Disney villain set against a deep blue background. Each stamp includes text that identifies the film in which the villain appeared, and the villain’s name.

The 10 characters on the stamps are the Queen from Snow White and the Seven Dwarfs, Honest John (Pinocchio), Lady Tremaine (Cinderella), the Queen of Hearts (Alice in Wonderland), Captain Hook (Peter Pan), Maleficent (Sleeping Beauty), Cruella De Vil (One Hundred and One Dalmatians), Ursula (The Little Mermaid), Gaston (Beauty and the Beast), and Scar (The Lion King).

In 2004, the Postal Service issued the first of seven sets of stamps featuring characters from Disney and Disney-Pixar animated films (Scott 3865-3868).

The most recent of these, a set of five stamps featuring Pixar characters, was identified by the Postal Service as “Mail a Smile” and was issued June 1, 2012 (Scott 4677-4681).

Technical details and first-day cancel ordering information for the Disney Villains stamps are provided below.

Standard ordering instructions apply. Collectors requesting first-day cancels are encouraged to purchase their own stamps and affix them to envelopes. The first-day cover envelopes should be addressed for return (a removable label may be used), and mailed in a larger envelope addressed to FDOI-Disney Villains Stamps, USPS Stamp Fulfillment Services, 8300 NE Underground Drive, Suite 300, Kansas City, MO 64144-9900.

Requests for first-day cancels must be postmarked by Sept. 15.