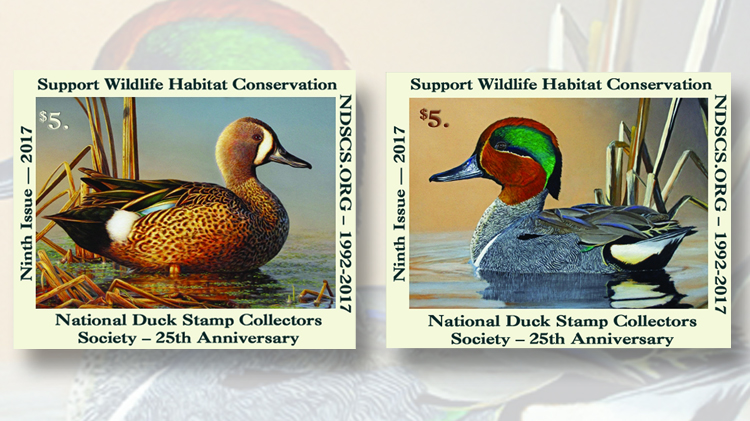 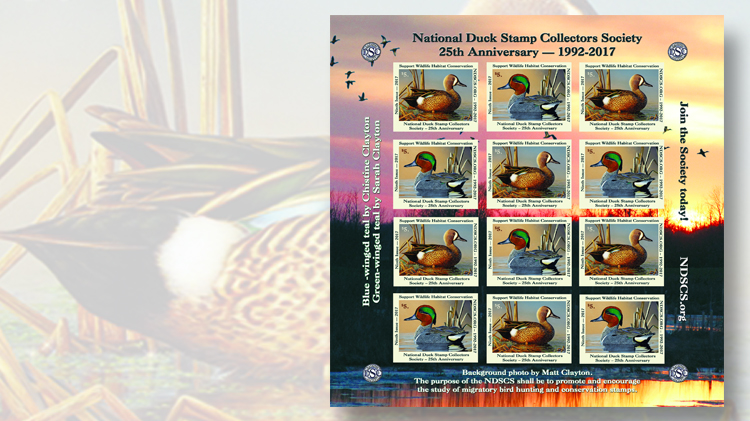 The pane of 12 society stamps celebrates the society's 25th anniversary.
Previous
Next

The National Duck Stamp Collector’s Society is commemorating its 25th anniversary with two new “society stamps” offered together in a pane of 12.

The artwork was created by award-winning members of the talented Clayton family from Ohio.

Christine Clayton painted the portrait of the right-facing blue-winged teal, and her sister Sarah painted the left-facing green-winged teal. The two stamps alternate in the pane.

Their father, Matt Clayton, created the pane's background image of a wetlands sunrise.

Sarah Clayton earned the 2012 Art of Conservation stamp award at the State-Fish Art Expo, the 2014 best of show award for the state of Ohio, and placed second in the 2016 federal junior duck stamp art competition.

In the 2015 Ohio Wetlands Habitat competition, Matt Clayton’s painting Bufflehead on the Cuyahoga came in second, just behind the winner, his daughter Christine. Matt’s painting was also chosen as the 2016 Ohio Ducks Unlimited sponsor print of the year.

The society stamps are offered in full panes of 12 for $50. Single stamps can be purchased, as well as pairs, blocks or strips, for $5 per stamp. Imperforate panes are $200 each, with a limited number produced. A 30 percent discount is applied when five or more panes are purchased.