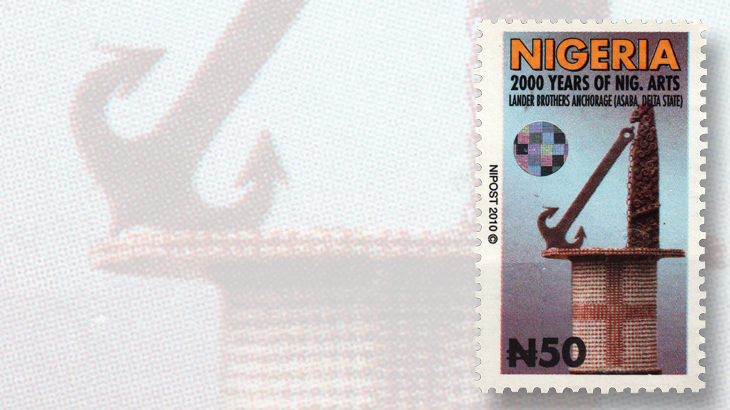 A previously unreported Nigeria 50-naira Lander Brothers Anchorage stamp recently sold in an online auction for the equivalent of about $560.

Collecting modern Nigeria can be a challenge. The marketing of Nigeria’s stamp program has been hit or miss. Some issues are well promoted and readily available to stamp dealers and collectors. Others seem not to have been promoted at all, and catalog editors and collectors only become aware of them when they show up in kiloware or trickle out of the country by other means.

In 2009, Nigeria began a set of definitive stamps featuring various aspects of Nigerian culture and history. The series continued in desultory fashion at least until 2011 with new stamps added from time to time.

The 2017 Scott Standard Postage Stamp Catalogue lists what is known of this set as Scott 822-829A, with most of the stamps not valued in mint or used condition. In the known set, there are three 50-naira Lander Brothers Anchorage stamps, each differing in design and production details (825, 825A and 829A). A fourth has now been reported.

Recently, a 50n Lander Brothers Anchorage stamp that differs from the other three sold in an online auction for the equivalent of about $560. The stamp features a circular hologram, is on thick white paper, and has the denomination in black. The ink of the orange “Nigeria” inscription does not fluoresce, and there is a “NIPOST 2010” copyright inscription in the left margin.

These details make it different in several ways from all of the previously known stamps. This stamp reportedly originated from a rural post office in southeastern Nigeria.

Keep your eyes open. Other examples might show up in kiloware or unsorted lots.