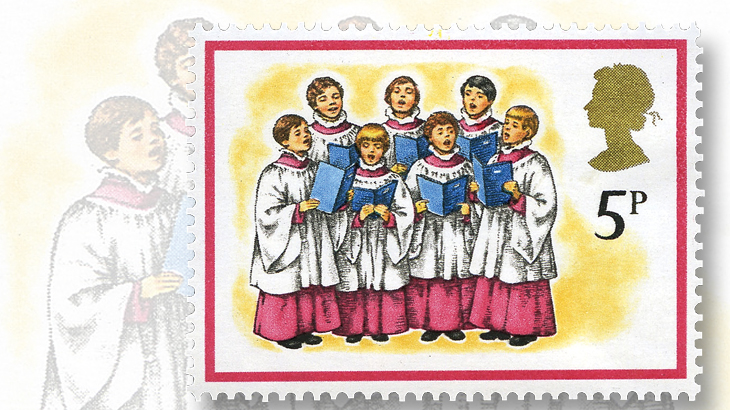 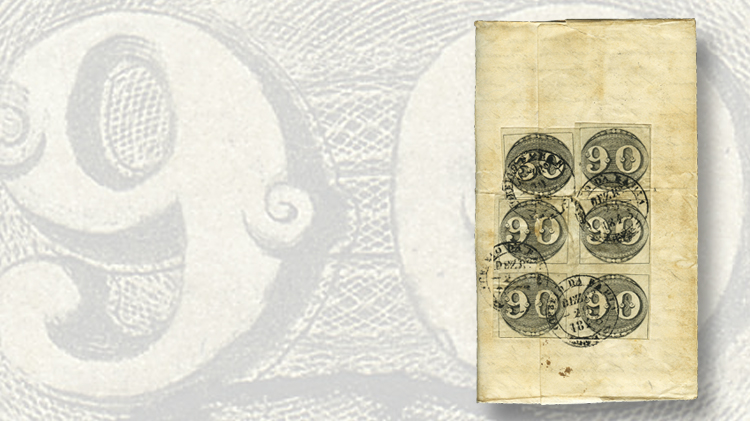 The largest recorded franking of Brazil’s 1843 Bull’s-Eyes issue is this cover carried by ship, with a block of five 90-reis stamps and a single 30-reis stamp. Identified as the “Rio” cover, it will be offered at auction June 27-30 by David Feldman in One
Previous
Next

A four-day sale by the David Feldman auction firm in Onex, Switzerland (near Geneva), will present material from five international groupings, along with a selection of worldwide singles and collections in a substantial sixth catalog.

The catalogs for the June 27-30 sale offer items, respectively, of Persia, including part 2 of the Efthekhar Collection; Russia and the Soviet Union; France and Colonies; Great Britain and the British Empire; Bulgaria; and “all world,” representing more than 50 countries.

The “all world” catalog includes an extensive selection of Brazil’s earliest issues, including the Bull’s-Eyes, the three denominations of imperforate engraved numeral designs issued in 1843 (Scott 1-3).

The unusual name was bestowed on these stamps because, with a little imagination, the rounded black background behind the denomination bears some resemblance to the eye of a bull.

The Feldman auction offers what is known as the “Rio” cover, a commercial business envelope mailed Dec. 23, 1843, from Rio de Janeiro to Bahia, sent by the vessel Imperatriz, and most important, franked with a block of five of the 90r Bull’s-Eye stamp and a single 30r stamp to pay a 480r ship rate.

Feldman describes this as the highest surviving franking of the Bull’s-Eye issue.

The block of 90r stamps is from the second composite plate, state C. The stamps were canceled on arrival by double-ring CORREIO DA BAHIA / DEZR. 29 1843 circular date stamps.

The stamps are affixed to the back of the envelope over the flap, and three of the stamps were split on opening as a result.

The Great Britain and British Empire auction catalog lists some 634 lots that include numerous Penny Black stamps, modern errors, collections, and much more.

An unissued 1978 5-penny British Christmas stamp, described as “very fine, probably unique,” clearly fits in with the style and subject matter of the four issued stamps from the 1978 set designed by Faith Jaques (Scott 847-850). Those issued stamps are denominated 7p, 9p, 11p, and 13p.

The multicolor design on the 5p mint stamp with original gum depicts seven choir members performing a song in church robes while holding blue folders of music scores open in front of them. A pink border frames the vignette.

The David Feldman auction catalogs for this sale series can be viewed on their website, and online bidding options are available.

The auction will take place in the Feldman Galleries at 175 route de Chancy in Onex.