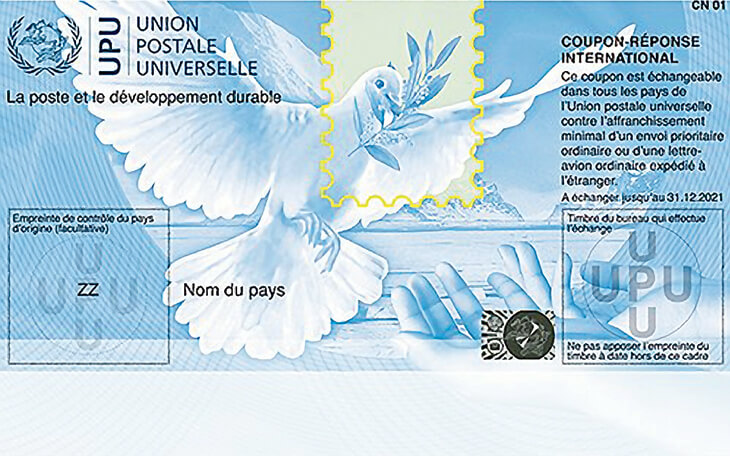 A new design for the international reply coupon will be introduced later this year. Nguyen Du of Vietnam created the design. The new design replaces the Doha model, which will expire Dec. 31, 2017.

The international reply coupon is undergoing a makeover, and the new design has been revealed by the Universal Postal Union.

The coupons can be purchased in many international post offices and sent to another country as a courtesy for a correspondent to redeem for airmail letter postage. The design changes every four years.

The design of the new coupon by graphic artist Nguyen Du of Vietnam shows “a pair of hands and a dove against an Arctic backdrop to represent sustainable development in the postal sector,” according to the UPU, an organization that serves as the primary forum for cooperation between postal administrations worldwide.

The design also shows a yellow stamp frame that represents “the future of the Post,” the UPU added.

Ten countries participated in the competition to design the new IRC, which was open to all UPU member countries.

The competition was held Oct. 7, 2016, during the UPU congress in Istanbul, Turkey, and the new IRC is therefore described as the Istanbul model.

The new design replaces the Doha model, named for the 25th UPU congress held in Doha, Qatar, in 2012. The Doha model IRC, which will expire Dec. 31, 2017, shows cupped hands catching a stream of water, to celebrate the theme of Water for Life.

International reply coupons have not been sold in United States post offices since early in 2013. At the present time, collectors in the United States can purchase IRCs from Canada Post by contacting Philatelic Customer Service, Canada Post Place, Box 90022, 2701 Riverside Drive, Ottawa, ON K1V 1J8, Canada; or calling 1-800-565-4362.

The current price for the IRC from Canada Post, in Canadian dollars, is $7.50. The new Istanbul model design is unlikely to become available until later this year, or early in 2018.

International reply coupons issued from 1907 through 2009 are listed and valued in the Scott Specialized Catalogue of United States Stamps and Covers.