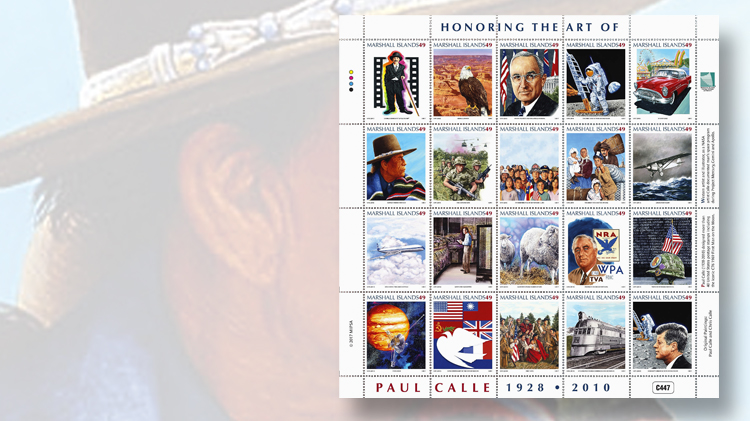 The Marshall Islands will honor artist and stamp designer Paul Calle (1928-2010) on a pane of 20 stamps to be issued Aug. 4 with a first-day ceremony at the APS Stampshow in Richmond, Va. 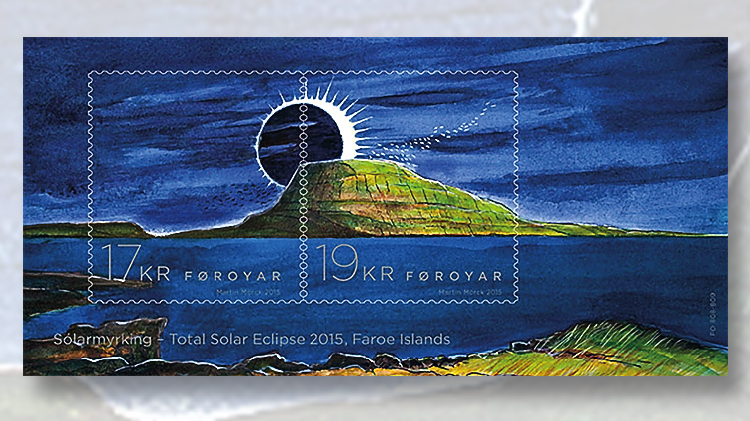 Faroe Islands issued this Solar Eclipse souvenir sheet in 2015. At the APS Stampshow, 500 examples of this sheet will be given away.
Previous
Next

In addition to offering more than 600 frames of world-class exhibits, approximately 100 dealers, three first-day-of-issue ceremonies and two auctions, Stampshow serves as the annual summer convention of the 30,000-member APS.

The APS membership meeting and town hall is set for 9 a.m. Saturday.

At 10:30 a.m. Aug. 4, the Marshall Islands will issue a pane of 20 stamps honoring the artwork of Paul Calle (1928-2010). Calle designed about 40 stamps for the United States, plus stamps for other countries. His son, Chris, who also is an artist and stamp designer, will be at the show.

The U.S. Postal Service will be on hand with a full array of its latest products at the show. Also, Nordica, which represents several Scandinavian and northern European postal agencies, will be at the show.

The Faroe Islands is giving away a souvenir sheet featuring a solar eclipse. The giveaway is being coordinated by the APS, and the first 500 visitors to the APS booth who request the sheet will receive one.

The dealers in the bourse will offer everything from bargain boxes of stamps and covers to more expensive rarer items.

The Discovery Cove youth area will include Stamps by the Bucket, design activities, and opportunities to use microscopes and to learn about soaking and hinging stamps. Also, all youth will receive a free goodie bag.

Dozens of talks, workshops and seminars are planned, including several beginners’ workshops sponsored by the APS, and two presentations from a preservation specialist at the Smithsonian Institution’s National Postal Museum.

The Tiffany Talk featuring James Barron, author of The One-Cent Magenta: Inside the Quest to Own the Most Valuable Stamp in the World, will take place Aug. 2, the evening before the show begins. The Campaign for Philately reception will be held after the talk.

The National Postal Museum and the APS will display rarities at the show, including the U.S. 1918 24¢ Inverted Jenny error,  owned by the American Philatelic Research Society, the sister organization of the APS. The APS also will exhibit a collection of intricate stamp boxes.

The celebration banquet on Saturday evening is a two-tiered event. First, most show awards will be presented at the open medal-level ceremony that begins at 4:15 p.m. Saturday, followed by a cocktail party. Tickets are required for the banquet, to begin at 7 p.m., at which the show’s and society’s premier awards will be announced.

The mailing address of the APS is 100 Match Factory Place, Bellefonte, PA 16823.