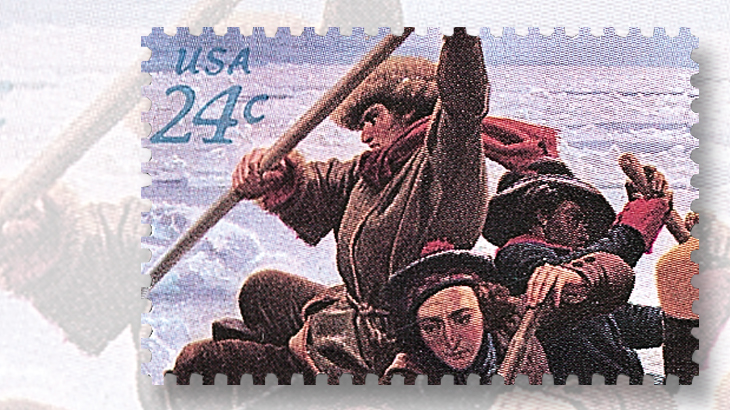 The cartoon caption contest for July features the stamp on the far left of the 1976 Bicentennial souvenir sheet picturing Washington’s crossing of the Delaware. Put yourself in the rags of the guys moving the boat through the ice, and tell me what you thi

The June cartoon caption contest featured the George Washington stamp (Scott1688b) from the 1976 Bicentennial souvenir sheet depicting Washington crossing the Delaware. As I was looking at this sheet, I got to thinking that another stamp from it would offer an opportunity of a different kind.

For that reason, the July cartoon caption contest stamp is Scott1688a, the stamp on the far left of the sheet showing two of the guys that were doing the work to move the boat through the ice.

Given that the lower ranks of the army often have a fairly jaundiced view of what they are asked to do, what they were saying, either aloud or to themselves, was probably a good deal less lofty than what was going through General Washington’s mind.

The challenge for this month’s cartoon caption contest is to put yourself in their rags, and to tell me what you might be saying or thinking about the task at hand, the war effort, or the plight of the military grunt. Or you can bring them into the modern day with comments on politics, stamp collecting, or anything else that occurs to you.

If you send an email, be sure to include your mailing address.

To be considered for the prizes, entries must reach me no later than July 28.