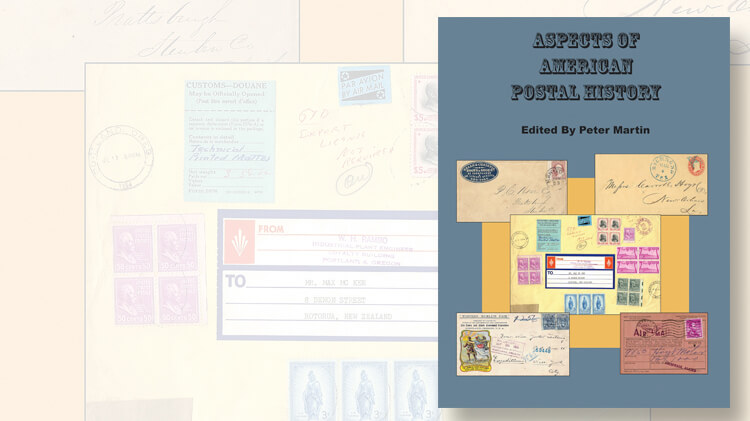 In an effort to inspire the next generation of postal historians, Peter Martin, editor and publisher of La Posta, called on a distinguished group of 16 philatelic writers to contribute an original work to a new book from La Posta Publications: Aspects of

Back in the day (1999-2003, in this case), I was an associate editor for Linn’s Stamp News, which, among other things, meant I was a junior member of the Linn’s staff.

As such, I was often tasked with writing short items, called “fillers,” to fill up small holes that remained after scheduled news stories, columns, and features were placed in the available editorial space for that week’s issue.

It was (and still is) part of Linn’s mission to promote philatelic societies and other organizations.

To that end, I often wrote fillers based on an article from a recent philatelic journal or society publication.

One such publication, La Posta: The Journal of American Postal History, invariably was filled with fascinating articles I enjoyed distilling down to a filler of three or four paragraphs.

When my collecting interests began gravitating toward postal history, I began communicating with postal history specialists, including the late Richard “Bill” Helbock, who founded La Posta in 1969 and served as its editor until his death in 2011.

I’ve known Pete since my early days with Linn’s, when he was editor of Scott Stamp Monthly. So, I was intrigued when I learned earlier this year about a new book to be published under his editorial guidance.

Martin’s passionate advocacy for the many splendid wonders of collecting postal history spurred him to gather a select group of 16 authors whom he asked to contribute an original article focusing on a particular area of interest.

The resultant output of these respected philatelic writers, whom Martin dubbed the “Sweet 16,” is now gathered in a new book hot off the La Posta Publications press: Aspects of American Postal History.

All of the articles, in their current form, appear in the book for the first time. According to Martin, four of the articles are either “updated” from or contain part of a feature previously published in La Posta.

In a nod to the rightward shift of the age bell curve among La Posta readers, Martin acknowledges in his introduction that “efforts must be made to recruit new and younger members into the speciality.”

“It is with that thought in mind that the idea for this book had its beginnings,” he writes.

Postal historians of all abilities and interests will be grateful Martin brought his idea to fruition in this splendid compilation.

Space considerations necessarily limit the scope of this review. As such, I mention herewith a sampling of the features that I found personally compelling. Lack of mention should not be viewed as a negative opinion of a particular author’s contribution.

Leading off the roster of 16 contributors is Confederate States dealer and expert Patricia Kaufmann, who examines aspects of independent state mail and the use of U.S. postage in the Confederate states.

Using a keen combination of political prints, photographs, newspaper clippings, and, of course, postal history, Kaufmann deftly traces the history of each state’s secession from the Union.

Crucially, she presents evidence from myriad legal and other sources to definitively establish the official secession dates of each of the 13 Confederate states and the Arizona Territory.

The results of these efforts were first brought together in 2012, with the publication of the Confederate States of America Catalog and Handbook of Stamps and Postal History. These efforts catalyzed the correcting of erroneous secession dates that had been in the philatelic literature for decades.

Among my various postal history collections is a small gathering of covers postmarked on Leap Day, Feb. 29. Most I’ve found in passing, without specific intent; others I’ve created intentionally.

Collecting covers canceled on a specific date, whether for personal or historical reasons, can be great fun.

I was pleasantly reminded of this fact when I perused Christine Sanders’ wonderful contribution titled “A Walk Through Postal History on Christmas Day, 1793–1899.”

Today, of course, post offices in the United States are closed on Christmas. “But that has not always been the case,” writes Sanders.

She points out, for instance, that Congress was in session Dec. 25, 1789, the first Christmas following the signing of the Constitution.

On a canvas spanning more than a century, Sanders displays 59 covers, beginning with a folded letter mailed in 1793 and featuring a clear “N[ew]. YORK. De[c]. 25” straight-line postmark.

A particular strength of the article is the historical vignettes Sanders provides for companies and organizations depicted on the advertising covers.

Courtesy of an ornate, perforated Associated Charities label on a Christmas Day 1899 cover, I learned that this entity gave birth to the Community Chest, which morphed into the United Way of today.

Both are longtime, enthusiastic postal historians who serve up a plethora of covers documenting elusive uses of these popular definitive series.

In addition, both serve as advisors to the Scott Specialized Catalogue of United States Stamps and Covers, providing valuing and editorial input for the Presidential and Liberty on-cover listings.

Is it possible to collect postal history associated with a single street?

Why focus on a single street? you might ask. Hemmings’ answer is both pragmatic and wise: “It would be impossible for one person to write the whole history of the planet by examining each city … using surviving paper as a guide.”

Several of the covers Hemmings illustrates are delightful eye candy. My favorite is an advertising cover for Ingersolls’ American Watches, which was located at 67 Cortlandt St.

My preferences aside, the whole article is worth a careful read. In 2013, it received the first Richard W. Helbock prize for the best article appearing in La Posta the previous year.

All of this and more await you in this 224-page volume, which provides a tantalizing glimpse of the many avenues one might travel down in the world of postal history.

Do you know a young postal historian? This engaging tome would make a wonderful gift, because now is the time to inspire the next generation of cover collectors.