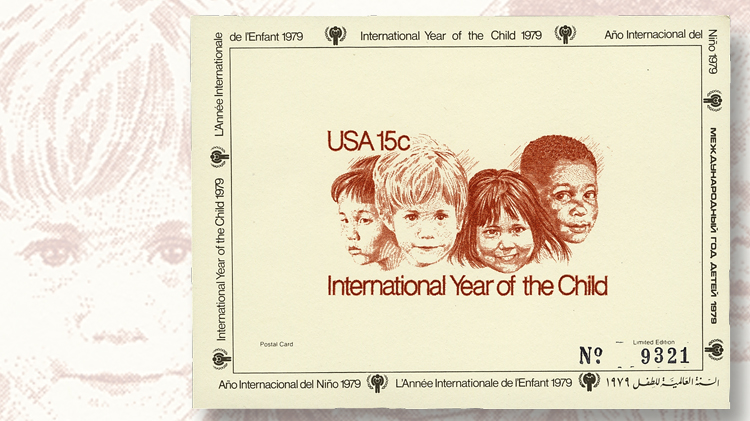 The United Nations issued 20,000 of these small souvenirs in cooperation with the United States Postal Service, using a Paul Calle stamp design created for the International Year of the Child stamp issued in 1979.

The 1979 15¢ International Year of the Child stamp (Scott 1772) was issued before U.S. stamp designs were routinely copyrighted, but the souvenir card shown with this column came with a printed note that reads, “This sheetlet is under the Special Authority of the United Nations Secretariat, and the United States Postal Service. A portion of the revenues accrued from sales will go to UNICEF – The International Year of the Child Trust Fund, as a charitable donation. A limited edition of 20,000 sheetlets are being distributed internationally.”

The United Nations apparently asked the U.S. Postal Service to use the design on these cards as a means of fund-raising for UNICEF.

Paul Calle, the designer of the stamp, didn’t receive any credit on the card. I wonder if either Calle or the USPS were paid a fee, and whether the USPS promoted the product in any way?

The cards were printed with “International Year of the Child” in five languages around the outside margin. A note on the back reads, “Non-exclusive Licensee of the United States Postal Service. Stamp Design© 1979 U.S. Postal Service.”

I have three examples, the highest number being 9321. One of the three has no number. So I wonder if all 20,000 announced were numbered, if the unnumbered card is an error, or if an overrun also was released?

In any case, this striking design makes a nice addition to a collection, and if 20,000 were indeed sold, they should be around in dealer stocks.