Volumes 3A and 3B of the 2018 Scott Standard Postage Stamp Catalogue: what to expect 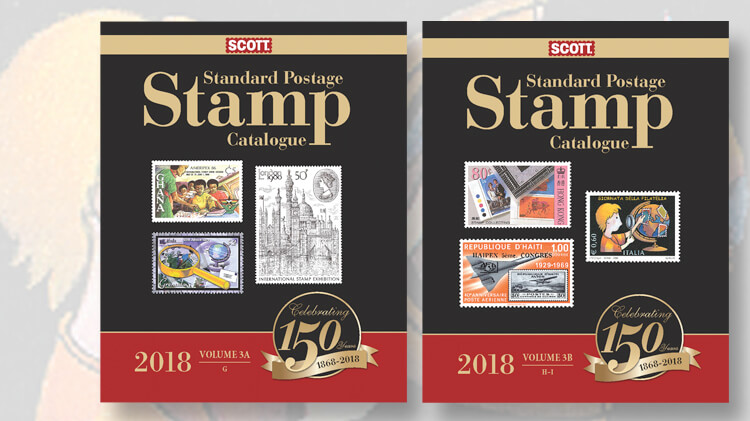 Vols. 3A (G countries) and 3B (countries H-I) of the 2018 Scott Standard Postage Stamp Catalogue are now available. Highlights include more than 8,800 value changes and numerous editorial enhancements.

The 2018 edition of the Scott Standard Postage Stamp Catalogue is now available in two volumes, A and B.  Vol. 3A covers the G countries of the world. Vol. 3B includes countries from H through I. The new volumes offer thousands of value changes and many new editorial changes and listings.

More than 150 value changes in Cambodia reflect increases over decreases. The changes are mostly among key issues. The souvenir sheets of one from the 1951-52 issue (Scott 15a, 16a, and 17a) each increase from $50 unused to $55.

A review of Great Britain resulted in value increases for scarcer modern stamps, especially for booklets that were issued in smaller quantities.

Renewed interest in the classic stamps of Gambia, particularly in rare items, results in upward movement of values for several early issues. Gambia Scott. 1, the 1869 Queen Victoria 4-penny pale brown from the first-issue Cameo series, jumps from $550 unused in Vol. 1 of the 2017 Scott Standard catalog to $575 in the 2018 edition. Similarly, the 6p blue (4) of this issue rises in value, from $625 unused to $675.

Almost 2,700 values changes were made to the listings of the German Democratic Republic (East Germany). An overall softening of the market is reflected throughout, although better items are holding their own.

A sprinkling of value increases can be found among the Gold Coast listings. The 1-penny King Edward VII stamp of 1908 (Scott 68) leaps from $8 unused to $9.50.

New minor listings for double impression varieties have been added to the Greece semipostal stamps of 1944.

Values for 30 imperforate sets have been added as footnotes among the Ghana listings.

The Central American country of Honduras received a thorough review this year, which resulted in 71 value changes. Many increases can be found among the airmail issues. The 1972 set of four overprinted airmail stamps honoring the 50th anniversary of the Masonic Grand Lodge in Honduras (Scott C501-C504) moves upward in value, from $11.70 mint to $20, and from $9.15 used to $11.50.

Activity in Italian States stamps is reflected in more than 650 value changes combined for the various states.

Most of the value changes for stamps of Iran occur among the modern issues, from 2014 to present.

Numerous illustrations of Trieste Zone A stamps of Italy overprinted “A.M.G./F.T.T.” for use by the Allied Military Government of the United States and Great Britain have been added to the listings.

Minor listings have been added for chalky paper varieties among the 1904-11 King Edward VII series of Hong Kong (Scott 86-108).

A double impression of the 1904 Indo-China 5-centime France stamp has been added as Scott 27a, valued at $450 unused and used in italics. New major number listings have been added to the postage due listings of Indonesia.

Values of numerous footnoted items in Honduras have been updated.

2018 SCOTT CATALOG VOL. 3
Fresh off the press! Buy the NEW 2018 Scott Standard Postage Stamp Catalogue Vol. 3 direct from AmosAdvantage.com & Save over $35 off MSRP!