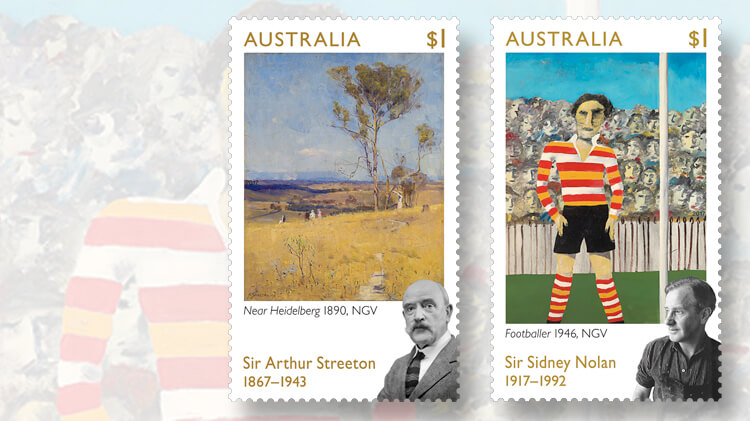 Paintings by Australian artists Arthur Streeton and Sidney Nolan are reproduced on two $1 stamps also being issued March 30 at the Melbourne show. 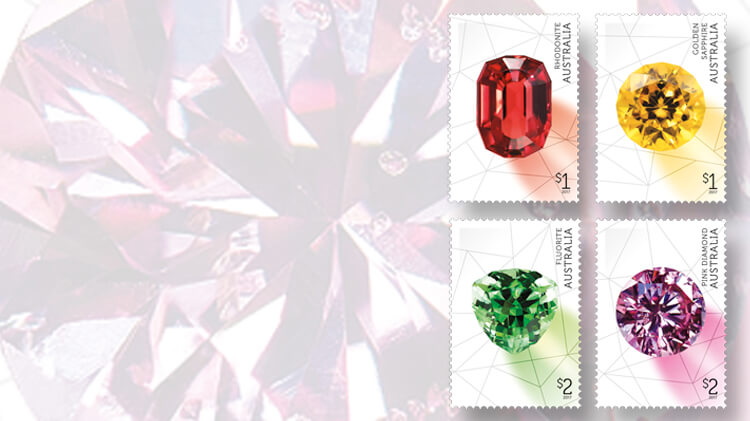 Four gemstones are pictured on Australia’s Rare Beauties stamps to be issued March 30, the opening day of a philatelic exhibition in Melbourne.
Previous
Next

The exhibition will take place March 30-April 2 at the Rupert Clarke Grandstand of the Caulfield Racecourse in Caulfield, a suburb of Melbourne. Australia Post is the principal sponsor of the show.

Gemstones from the collection of the Australian Museum in Sydney are pictured on the four stamps in the Rare Beauties set.

Rhodonite and golden sapphire are shown on the se-tenant (side-by-side) pair of $1 stamps, and fluorite and pink diamond on the pair of $2 stamps.

According to Australia Post, the golden sapphire and pink diamond represent gemstones that were “cut and polished as possible centrepieces for exquisite jewelry.”

The examples of rhodonite and fluorite are considered collector stones.

Australia Post said: “Some arresting minerals that are too soft or fragile for wearing as jewellery are faceted into ‘collector stones,’ in which the art of the expert cutter has overcome the constraints of the mineral to present the stones as ascetic objects for collectors.”

The stamps were printed by RA Printing in sheets of 50, and in a souvenir sheet with all four designs se-tenant. The issue also includes a booklet of 10 of the $1 stamps, and a prestige booklet that contains illustrations and text by gem specialist Gayle Sutherland in addition to the stamps.

Each design features a painting in the center and shows a photographic portrait of the artist in the lower right.

The stamp for Streeton reproduces Near Heidelberg, painted in 1890. Nolan’s Footballer dates from 1946. Both are part of the collection of the National Gallery of Victoria.

Australia Post reports that Ego printed these two stamps by offset in sheets of 25.

Australia Post will have a post office at the Melbourne 2017 FIAP stamp exhibition. In addition to the aforementioned stamps, it will be offering postmarks, limited-edition items, and other stamp-related products.

The exhibition will include more than 20,000 pages of competitive exhibits from 18 countries. Among the 70 booth holders in the bourse (sales area) will be dealers, auctioneers, and postal administrations.

Further information about the show can be found here.