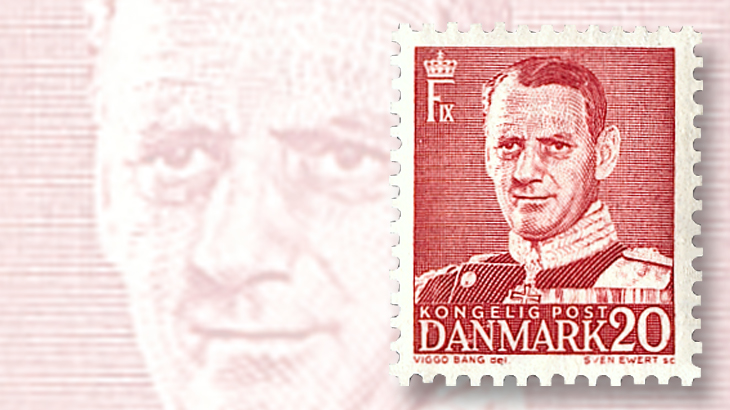 The first stamps honoring Denmark's King Frederik IX were issued in 1948, shortly after he ascended the throne.

Following the death of his grandfather, King Frederik VIII, on May 14, 1912, his father became King Christian X, and young Frederik was named crown prince. The prince entered the Danish Naval Academy in Copenhagen as a midshipman in 1917; he would become captain of a torpedo boat and later rise to the rank of rear admiral.

In 1935 he married Ingrid, the Swedish princess, and she became Queen of Denmark when Frederik was crowned following the death of his father in 1947. Together they had three daughters: Margrethe, Benedikte, and Anne-Marie.

Frederik IX was widely admired by the people of Denmark. A news report published in the Chicago Tribune following the king’s death Jan. 14, 1972, noted that “Frederik stood 6 feet 6 and was richly tattooed, a souvenir of his navy days. He had flown dirigibles, commanded torpedo boats, driven locomotives, and conducted symphony orchestras.”