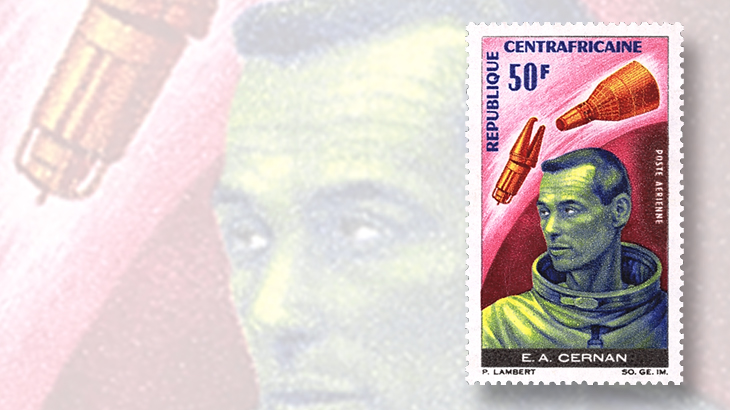 American astronaut Eugene A. Cernan was honored on a 1966 airmail stamp from Central African Republic.

A member of the Navy ROTC at Purdue, Cernan became a naval aviator and was selected by NASA for astronaut training in October 1963.

His first mission in space came three years later as pilot of the three-day Gemini IX mission, during which Cernan became the second American to walk in space.

In May 1969, Cernan was the lunar module pilot for Apollo 10, which has been referred to as the dress rehearsal for the Apollo 11 moon landing mission that took place just two months later.

Cernan made his second trip to the moon as commander of the Apollo 17 mission, the final U.S. manned lunar mission to date. Cernan and lunar module pilot Ronald Schmitt worked together on the moon’s surface while command module pilot Ronald Evans remained in orbit.

Cernan spent more than 73 hours on the surface of the moon. With coauthor Donald A. Davis he wrote his 1999 memoir The Last Man on the Moon, and was an active advocate of advancing U.S. space exploration efforts.