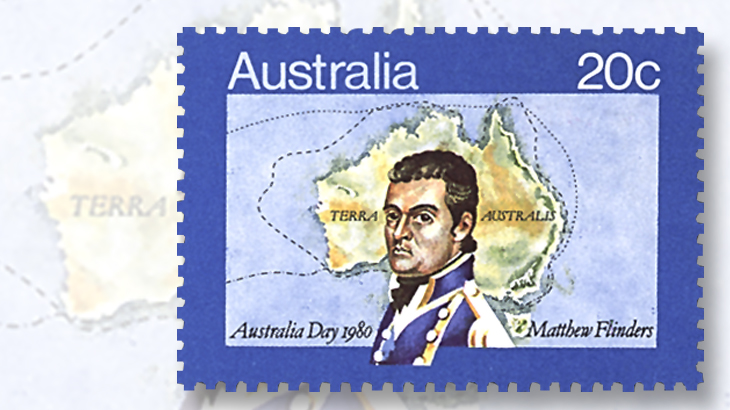 Matthew Flinders, a British navigator, was honored on a 20¢ stamp from Australia in 1980.

British explorer and navigator Matthew Flinders was born March 16, 1774, in Donington, Lincolnshire. He was attracted to the seafaring life at an early age, despite being born the son of a surgeon. Joining the Royal Navy at age 15, he served first on HMS Alert, and later on HMS Providence under Capt. William Bligh.

He learned navigation on his early journeys and was named midshipman of HMS Reliance in 1795. With his friend George Bass, the ship’s surgeon, he mapped the coastline of New South Wales.

Three years later, Flinders was in command of HMS Norfolk and circumnavigated Tasmania (then known as Van Diemen’s Land), discovering the passage he named Bass Strait, and thereby proving that Tasmania was an island.

He returned in 1801 in command of HMS Investigator and become the first to circumnavigate Australia entirely, proving it was a continent and accurately mapping the coastline he explored.

After being held captive during the Napoleonic Wars for more than six years in the French colony of Ile de France (known today as Mauritius), Flinders returned to Great Britain. He recorded his findings in his book A Voyage to Terra Australis, published in 1814, but died soon after at age 40 on July 19, 1814.