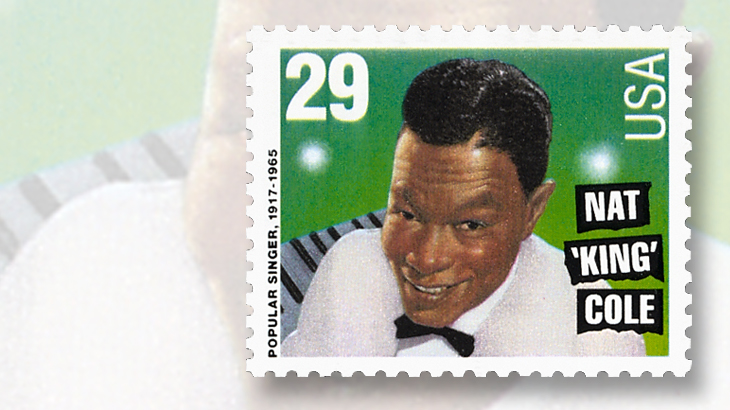 Popular singing star Nat King Cole was honored on a 29¢ stamp in 1994.

American singer, musician, actor, and television personality Nat King Cole was born Nathaniel Adams Coles in Montgomery, Ala., on March 17, 1919. The family moved to Chicago, where his father was a Baptist minister, and his mother, the church organist, began her son’s musical instruction.

Nathaniel dropped the “s” off the family name and became Nat Cole as a professional musician — “King” was added to the name soon after.

Cole was drawn to jazz and swing music, forming the Nat King Cole Trio with guitar and bass accompanying his piano and vocals. The group signed with Capitol Records in 1943.

“He is credited with pioneering the sophisticated West Coast nightclub style of singing and playing … emphasizing the piano as a solo rather than a rhythm instrument — an influence sill felt today in the jazz world,” the United States Postal Service wrote when announcing the 29¢ stamp honoring Cole.

Cole recorded numerous jazz and pop standards, including some that were his own compositions. Among his most successful hits were Straighten Up and Fly Right, Nature Boy, Mona Lisa, Too Young, and Unforgettable. The last song, a hit for Cole in 1951, was rereleased 40 years later, after Cole’s death, as a duet with added vocals by his daughter Natalie Cole, who was also a successful singer.

Nat King Cole had his own variety show on NBC television in 1956-57, and also appeared in films, often in a musical role.

The stamp commemorating Cole was issued Sept. 1, 1994, as part of the Popular Singers set in the Legends of American Music series.