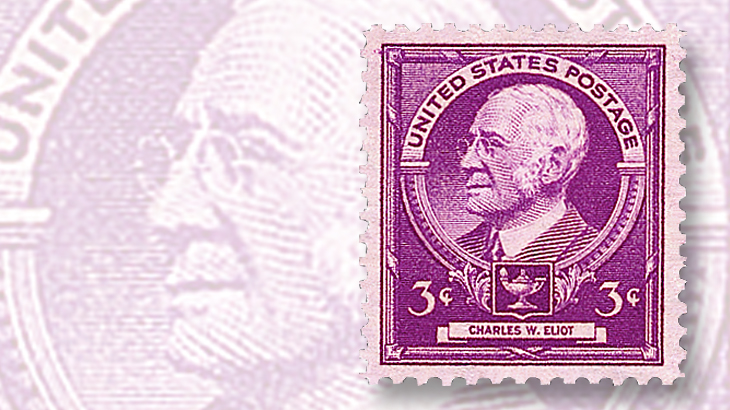 American educator Charles W. Eliot was honored on a 3¢ stamp issued in 1940.

Charles William Eliot is commemorated on a 3¢ bright purple stamp issued March 28, 1940, in the American Educators set of the Famous Americans series (Scott 871).

Eliot, who was born March 20, 1834, taught at Harvard University and at the Massachusetts Institute of Technology before he was chosen to become president of Harvard in 1869. He served 40 years, until 1909, and transformed not only Harvard but the American structure of higher education during his tenure.

Harvard today notes that among the reforms and advances brought about by Eliot were Harvard Summer School in 1871, the Harvard Graduate Department (later the Graduate School of Arts and Sciences) in 1872, the establishment of Radcliffe College in 1879, and the schools of landscape architecture around 1901, and business administration in 1908.

It was during Eliot’s Harvard leadership that the school offered students the opportunity to choose their courses, an open-curriculum program that other universities would also adopt.

In a tribute to Eliot, the university quotes historian Samuel Eliot Morison: “One after the other, the greater universities of the country followed the reforms that Harvard had adopted; it was clear by the middle nineties that the Harvard of Eliot … had set new standards for higher education in America. By the turn of the century he was one of the leading public figures of the country; his opinion and support were sought on every variety of public question.”