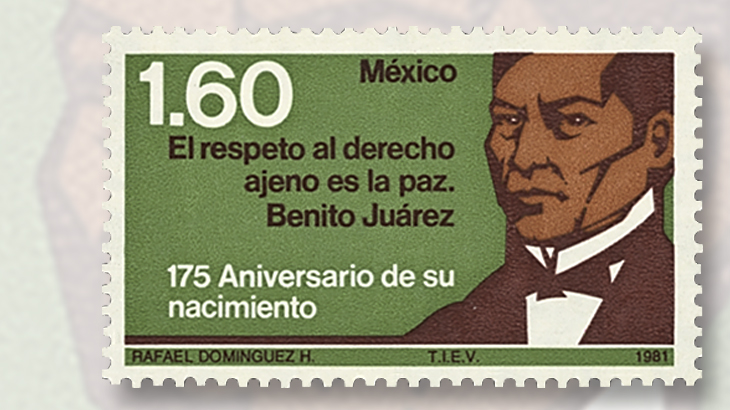 Mexican president Benito Juarez was honored on a stamp from Mexico in 1981.

Benito Juarez, who served as president of Mexico for more than a decade, was born March 21, 1806, in San Pablo Guelatao, Oaxaca. His birthdate is celebrated annually as a national holiday in Mexico.

Born into an indigenous Zapotec family, Juarez was raised by an uncle after his parents and grandparents died when he was young. He was a student at the seminary before earning his law degree at Oaxaca Institute of Arts and Sciences.

Juarez was elected to the Oaxaca city council in 1831. He became a judge and was elected governor of Oaxaca in 1847, but was forced into exile in 1853 after the conservative government came into power. He lived for a while in New Orleans, La., before he could return to Mexico.

After serving as chief justice of Mexico’s Supreme Court, Juarez was elected president in 1861. The empire he opposed was overthrown during his presidency, the French invasion was repelled, and efforts to institute democratic reforms began.

Many stamps of Mexico honor Benito Juarez, beginning with a set first issued in 1879, seven years after his death from a heart attack on July 18, 1872.