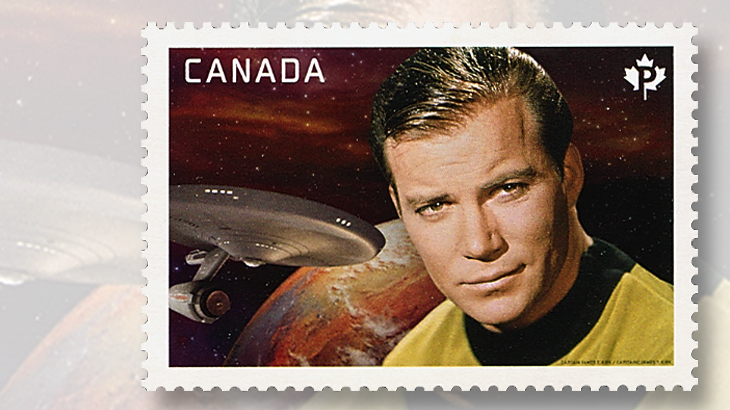 William Shatner is featured in his role as Star Trek's Captain James T. Kirk on this 2016 permanent-rate stamp from Canada.

Shatner is also an accomplished author who has written or cowritten some 35 books, including several novels set in the Star Trek universe, and his most recent book, a nonfiction tribute to his friend and Star Trek co-star Leonard Nimoy, who died in 2015: Leonard: My Fifty-Year Friendship with a Remarkable Man.

Shatner’s early acting experiences include performing Shakespeare at the annual festival in Stratford, Ontario, and guest roles on numerous popular TV series in the 1960s, such as The Twilight Zone, Route 66, The Man from U.N.C.L.E., and Gunsmoke.

He was cast as Captain Kirk when the original Star Trek series debuted in 1966, and remained in the role for the three seasons the show was in production. He voiced Kirk for an animated Star Trek series that lasted two seasons, and returned to occasional TV and film roles.

Shatner continues to take on various film and television roles, as well as occasional appearances at Star Trek and media fan conventions.

In his role as Kirk, Shatner has appeared on stamps from several different countries. Canada honored the actor in 2016 on two nearly identical nondenominated permanent-rate (85¢) stamps (Scott 2912a, 2917), in its Star Trek commemorative series.