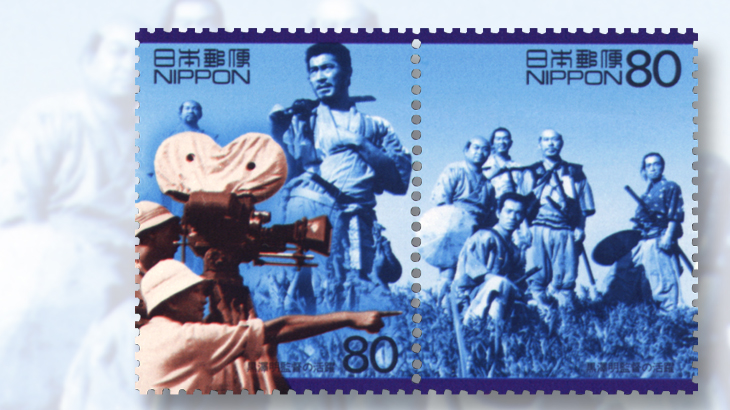 A pair of 80-yen stamps from Japan's 1999-2000 20th Century set shows director Akira Kurosawa and a scene from his film Seven Samurai.

Acclaimed Japanese filmmaker and screenwriter Akira Kurosawa was born in Tokyo March 23, 1910. As a youngster, Kurosawa shared his father’s interest in motion pictures, and at age 25 he was hired as an assistant director by a Japanese film studio.

He worked for several years before the opportunity came to complete his own first film, Sanshiro Sugata, in 1943. Following the filming of his second picture, The Most Beautiful, in 1944, he married actress Yoko Yaguchi, who was in the cast of the film. They had two children, a son and a daughter.

Kurosawa directed more than 30 films during a period of 50 years, often writing the scripts or collaborating with other writers, and frequently working with Toshiro Mifune (1920-97), one of Japan’s most famous actors.

Kurosawa received an Academy Award for lifetime achievement in 1990. He died in Tokyo in 1998.

The director has been honored on stamps from several countries. Two stamps from Japan’s extensive 1999-2000 20th Century set show Kurosawa at work, with a background scene from Seven Samurai (Scott 2697d-e).