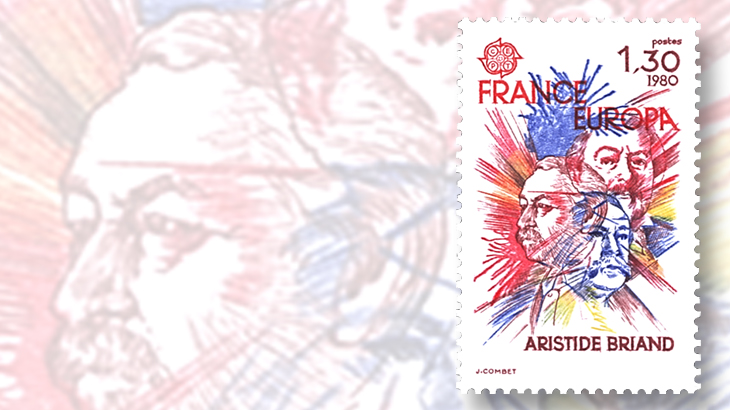 French political leader Aristide Briand was honored on a 1.30-franc stamp issued in 1980.

Briand entered politics soon after obtaining his law degree and became a leader of the French Socialist Party. As a member of the Chamber of Deputies in the French Parliament, he was instrumental in the 1905 passage of the law on the separation of the churches and the state.

Briand served in a number of ministerial positions during his lifetime, and beginning in 1909 he served 11 terms as prime minister, though not all consecutively.

He was an advocate for the formation of the League of Nations, and as France’s foreign minister he worked with German foreign minister Gustav Stresemann and British foreign secretary Sir Austen Chamberlain to forge the 1925 Pact of Locarno in an effort to establish peaceful relations among European nations.

With United States Secretary of State Frank B. Kellogg, he developed the Kellogg-Briand Pact of 1928, an agreement signed by 60 nations in an effort to legally abolish war.

Jointly with Stresemann, Briand was awarded the Nobel Peace Prize in 1926, and he was the subject of the Time magazine cover feature of Dec. 19, 1927.