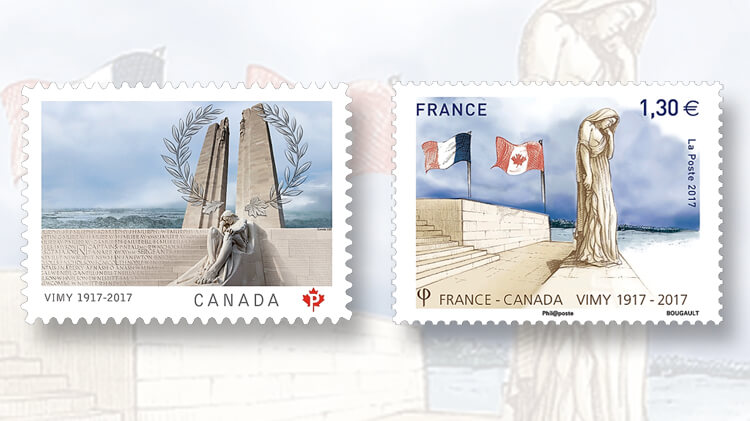 Canada Post and France’s La Poste are participating in an April 8 joint issue remembering the 100th anniversary of the Battle of Vimy Ridge. The battlefield in northern France is the site of the largest Canadian war memorial ever built. 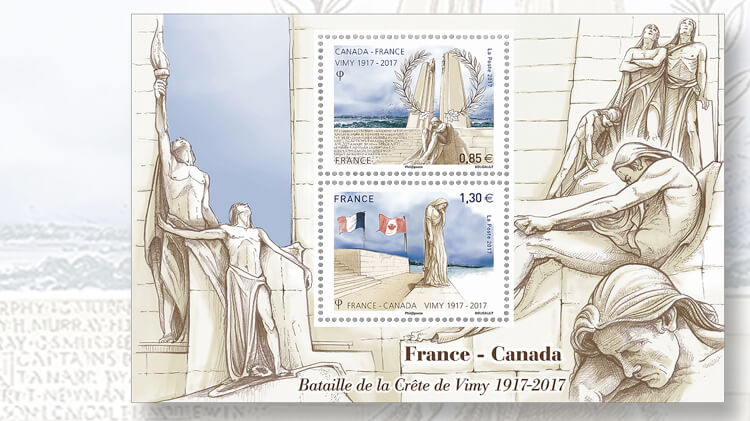 The France souvenir sheet focuses on sculptures from the Canadian National Vimy Memorial in France. 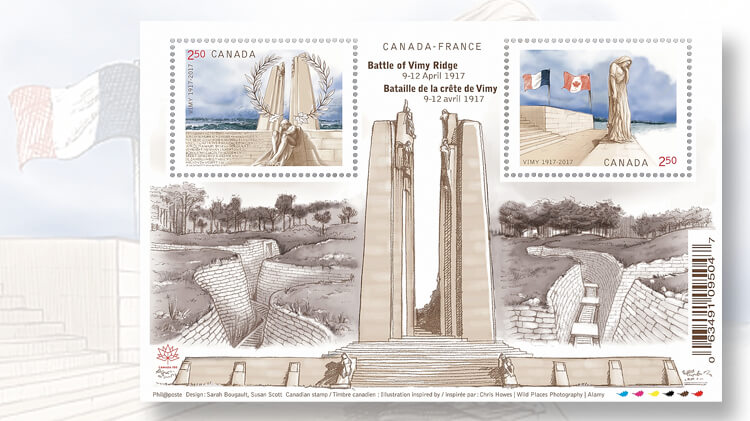 Canada’s souvenir sheet commemorating the Battle of Vimy Ridge contains two $2.50 international-rate stamps reproducing the designs of Canada’s permanent-rate stamp and France’s 1.30 stamp. The monument’s towering pylons and trenches from the battle are
Previous
Next

Canada Post unveiled the designs for its 100th Anniversary of the Battle of Vimy Ridge stamps, a joint issue with France’s La Poste, March 22 at the French Embassy in Ottawa. The stamps are being issued April 8.

Fought April 9-12, 1917, in northern France, this World War I Allied victory “is considered by many to be one of the defining moments that helped to forge a proud, more independent identify for a nation that was still relatively young,” Canada Post said in its press release announcing the joint issue.

Deepak Chopra, president and CEO of Canada Post said: “The Battle of Vimy Ridge saw thousands of Canadians make the ultimate sacrifice and is the best-known chapter in our country’s proud First World War history. The valour of Canadians at Vimy a century ago is a poignant reminder of the enormous price paid so we can live in freedom.”

The designs of the stamps and souvenir sheets in this issue feature the Canadian National Vimy Memorial in France.

The website of Veterans Affairs Canada describes this monument: “The Canadian National Vimy Memorial does more than mark the site of the great Canadian victory of the First World War. It stands as a tribute to all who served their country in battle and risked or gave their lives in that four-year struggle.

“Designed by Canadian sculptor and architect Walter Seymour Allward, the Canadian National Vimy Memorial stands on Hill 145, overlooking the Canadian battlefield of 1917, at one of the points of the fiercest fighting. It took 11 years and $1.5 million to build and was unveiled on July 26, 1936 by King Edward VIII, in the presence of President Albert Lebrun of France and 50,000 or more Canadian and French Veterans and their families. In his address, the King noted, ‘It is a memorial to no man, but a memorial for a nation.’ ”

Canada’s nondenominated permanent-rate (85¢) stamp depicts a statue of a grieving man from the memorial, the memorial’s towering twin pylons representing the Canadian and French forces, and a few of the 11,285 names of Canadian soldiers, whose bodies were never recovered, inscribed on walls at the site. The ridge behind the monument is shown in the background.

Collectors searching for the reference to the 150th anniversary of confederation hidden on this year’s Canadian stamps might want to look closely at the wall of names on the design.

Canadian artist Susan Scott of  Montreal created the illustration for this stamp. It was printed in a booklet of 10.

In its Details magazine for collectors, Canada Post said this figure of a cloaked woman, “one of the most poignant statues at the site,” symbolizes the country in mourning.

The flags of France and Canada also are pictured in the stamp’s design.

Souvenir sheets from Canada Post and La Poste include both stamp designs, with additional images from the memorial in the selvage.

In the Canadian souvenir sheet, the two designs are shown on $2.50 international-rate stamps, and the French sheet includes the aforementioned 1.30 stamp and an 0.85 stamp picturing the Canadian design.

Images from Chris Howes of Wild Places Photography also were used in the design of this joint issue.

France’s Philaposte printed that nation’s souvenir sheet by intaglio in a quantity of 450,000, according to La Poste.

Canada Post also will be selling the French souvenir sheet, as well as two first-day covers: one with the permanent-rate booklet stamp, and one with both the Canadian and French stamps.