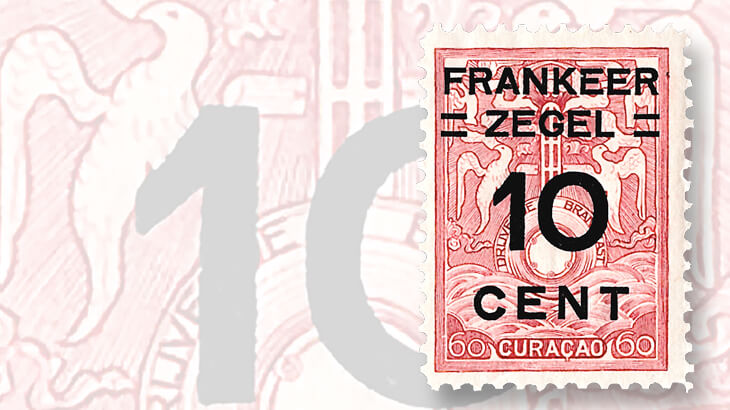 Marine insurance stamps filled a special use on letter mail aboard ships, but some of them were overprinted for use as Netherlands Antilles postage stamps in 1927. 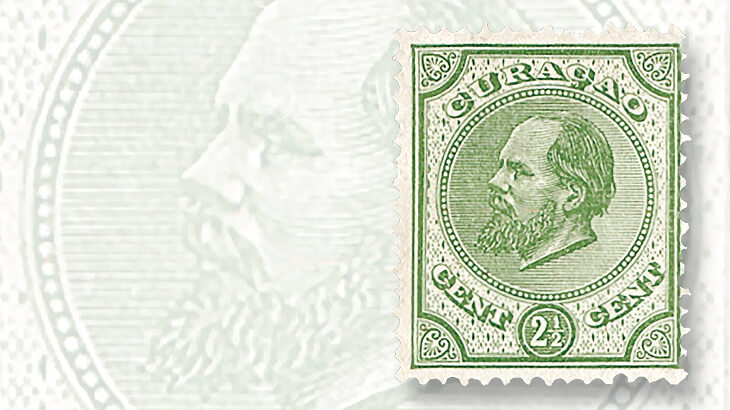 The first stamp of the Dutch colony of Curacao, issued in 1873, bears a portrait of the ruling monarch, William III of the Netherlands. 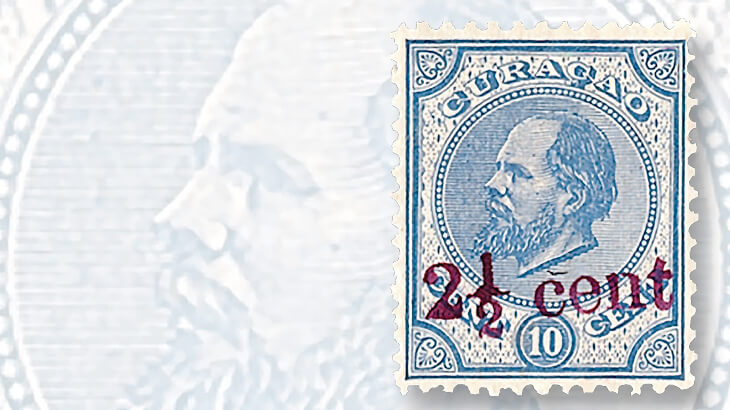 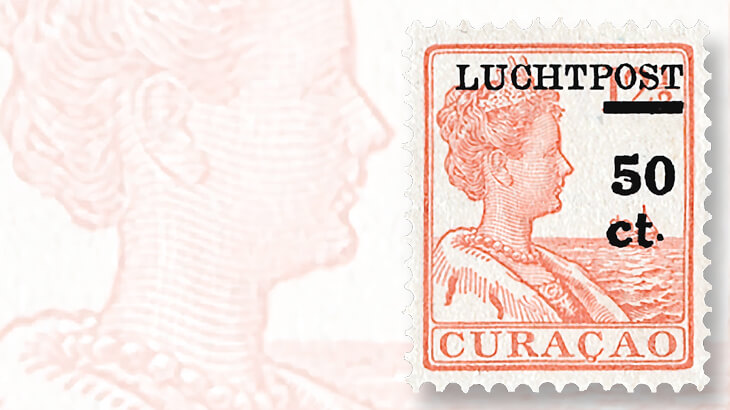 Curacao’s first airmail issue was made by overprinting the 12½¢ Queen Wilhelmina stamp of 1922 with “Luchtpost” (airmail) and a surcharge to meet the airmail rate. 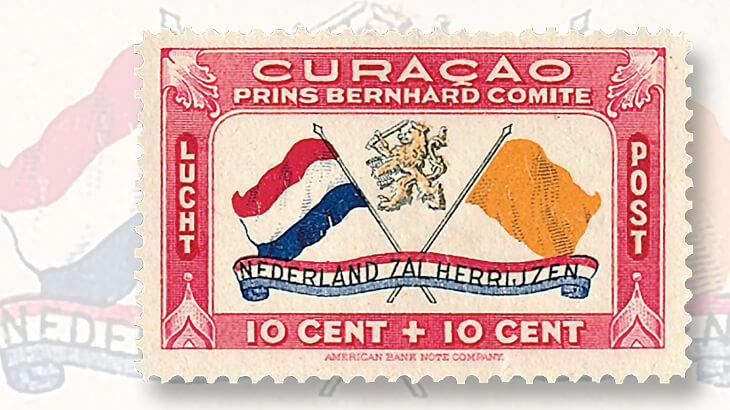 Three Caribbean islands within the Leeward Antilles — and formerly part of the former Dutch dependency known as Netherlands Antilles — are in a group south of the Dominican Republic and Haiti and north of Venezuela.

From west to east, these islands are Aruba, Curacao and Bonaire, known as the “ABC islands.”

Now you know your ABCs — and this column will focus on C: Curacao.

There are smaller islands north of Curacao and Bonaire that also were part of the Netherlands Antilles, which dissolved in 2010: The smaller islands are St. Martin (Sint Maarten), Saba, and St. Eustatius (Sint Eustatius).

The history of Curacao goes way back in time: to 1634, to be precise, when the Dutch established the colony of Curacao. The Dutch West India Company (formally Geoctroyeerde Westindische Compagnie) was given a charter for trade between the Netherlands, the West Indies, and Surinam. Thus, the Dutch West India Company became accountable for delivering mail between the Netherlands and Curacao.

The British began occupation of Curacao on Aug. 27, 1807, and provided a post office at Willemstad to serve Aruba, Bonaire, and Curacao. The earliest use of Curacao postal markings dates to 1808.

In April 1827, the first steamship to make the westbound trans-Atlantic trip was built by the British and owned by the Dutch. The name of the steam packet was Curacao, and it took 44 days for the crossing from the Netherlands to Curacao.

Curacao’s first stamp, Netherlands Antilles Scott 1, issued in 1873, is a 2½¢ stamp bearing the image of King William III of the Netherlands. This issue had a fairly long life because the stamps were seldom used before 1877, when Curacao joined the Universal Postal Union.

In 1921, the Netherlands created what were called marine insurance stamps (Netherlands Scott GY1-GY7, often referred to as “floating-safe stamps”). These were issued in reaction to the sinking of the Titanic and the Lusitania, and maritime disasters of World War I.

Stamps in seven different denominations (Netherlands Antilles Scott 87-93) were prepared for Curacao in 1927, similar to the Netherlands marine Insurance stamps in design but overprinted and surcharged.

The overprint was “Frankeer/Zegel” (postage stamp); thus, the stamp was not for use as a marine insurance stamp but intended for regular postage. The stamps had a short life, being demonetized in 1930.

Time passed and newfangled transportation appeared. The first airmail flight in Curacao occurred April 8, 1925. The plane went from Willemstadt, Curacao’s capital, to La Guaira, the capital city of the Venezuelan state of Vargas. It was not until 1929 that Curacao issued its first airmail stamp: the 1922 12½¢ red Queen Wilhelmina stamp overprinted “Luchtpost” (airmail) and surcharged 50¢.

Below the flags is a banner with the words “Nederland Zal Herrijzen” (“Netherlands Shall Rise Again”), a reference to the German occupation of the mother country. The surtax provided funds for war materials for the Netherlands’ fighting forces in Great Britain.

As you wander through your collection of Curacao stamps, you will notice that the country name “Curacao” was replaced with “Ned. Antillean” (Netherlands Antilles) as of the issue of Oct. 3, 1949 (Scott 206-207).

A new constitution in effect in May 1948 gave Curacao the greatest autonomy possible while still retaining Dutch rule. At that time, Curacao and related islands were renamed “Netherlands Antilles.”

Aruba left the Antilles union in 1986, and the Netherlands Antilles as a political unit dissolved Oct. 10, 2010.

Curacao and St. Martin became constituent countries within the Kingdom of the Netherlands. Today each issues its own stamps bearing its own country name.

There are many beautiful and interesting stamps to collect from the ABC islands, Netherlands Antilles, St. Martin, and the Caribbean Netherlands. Give them a try!