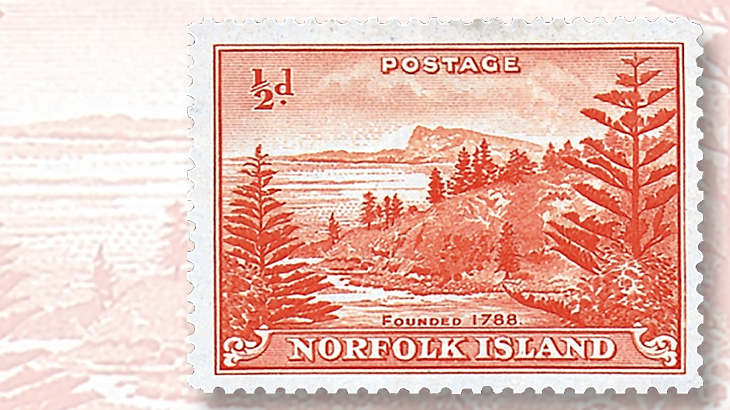 The stamps in Norfolk Island’s first stamp set, in 1947, show Ball Bay, named after the commander of the first ship bringing convicts in 1788. 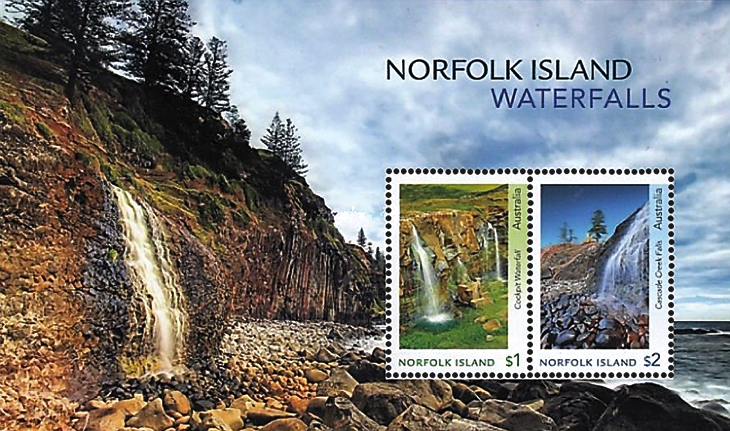 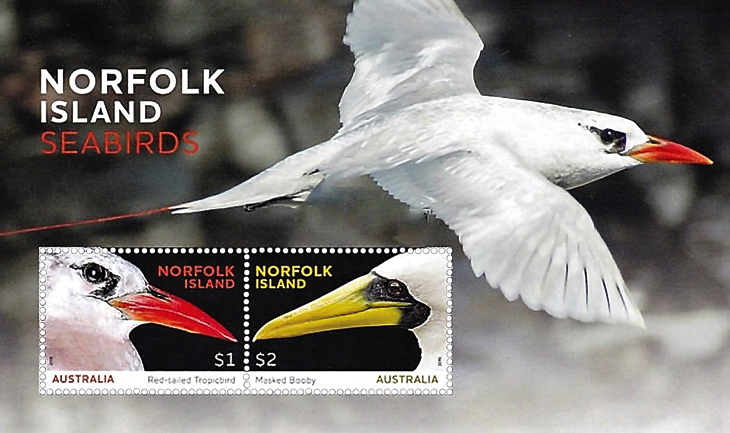 Australia now handles the issuing and sale of Norfolk Island stamps, and its name also appears on them. This Seabirds miniature sheet of two stamps was issued Sept. 20, 2016. 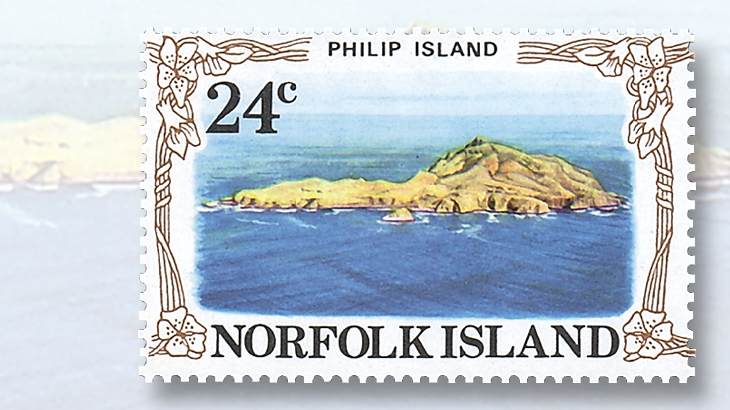 Philip (also known as Phillip) Island, a close neighbor of Norfolk Island, on a 1982 stamp. 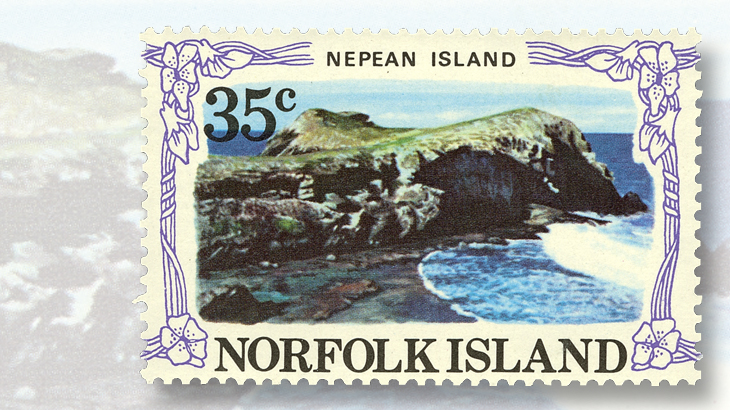 Scenes of uninhabited Nepean Island, now home to many breeding seabirds, are pictured on stamps in a 1982 Norfolk Island set of five.
Previous
Next

Norfolk Island is a small and beautiful island 900 miles off the east coast of Australia. The land was sighted by Captain Cook in 1774 and settled by Great Britain as part of its colonization of Australia from 1788.

Norfolk Island served initially as a penal colony, a use that ended in 1855. Many of the beautiful buildings erected there, and still in use, were built by the prisoners. Today the island attracts visitors who come for vacation.

Norfolk Island became a dependency of New South Wales, Australia, in 1887, and in 1913 the island was transferred to the Australian government. The Act of 1979 gave Norfolk limited autonomy, and the island was self-funded until Australia introduced the GST (goods and services tax) in 2000.

Between the GST and the 2008 global financial crisis, Norfolk Island ended up being subsidized by Australia, at a cost of more than $12 million in 2015.

The Norfolk Island Legislation Amendment bill was passed by the Australian Parliament in May 2015, abolishing self-government on the island and making it a council under New South Wales as of July 1, 2016.

Norfolk Island’s first stamps (Scott 1-12) were issued June 10, 1947, and depict the famous Norfolk Island pine trees and a view of Ball Bay, as seen on the stamp below. Norfolk Island was created by an undersea volcano that erupted approximately 2½ million years ago. Rocky evidence of some of the ancient volcanic activity is visible in the background of the stamps. Two additional stamps (19-20) of the Ball Bay type were issued in 1959.

The 1947 series has some varieties printed on thick or thin paper. It is easy to tell the difference. Hold the stamp with your tongs and then use one of your fingers to lightly flick the stamp. If you hear a snap, that means it is thick paper. If the flick is barely heard, that is thin paper.

Other differences in the 1947 set are printings on white paper and/or on lightly colored paper (the Scott Standard Postage Stamp Catalogue lists the 1947 stamps as being “on toned paper”). These varieties do not add a great deal of value to the stamps, but it is fun going after them.

Two other islands exist as part of the Norfolk Island group.

Phillip Island, seen on the 24¢ stamp below, is a little more than four miles south of Norfolk Island, was named in 1788 after Arthur Phillip, first governor of New South Wales. The uninhabited island has a barren appearance. Soil erosion and little plant life came about because of early settlers who brought domestic animals and rabbits that destroyed most of the vegetation.

In 1982, Norfolk Island issued a strip of five stamps (Scott 288) showing Phillip Island and some of the island’s flora and fauna. (The island’s name is spelled “Philip” on the 1982 stamps and also on a 1987 issue, Scott 404, part of a set showing Norfolk scenery.)

Tiny Nepean Island, approximately half a mile from Norfolk Island, also is uninhabited. Unlike Norfolk and Phillip Islands, Nepean is not of volcanic origin. It was used by early settlers for timber (the indigenous Norfolk Island pines) and as a quarry. These days, numerous types of seabirds come to Nepean to breed. Nepean, seen on the 35¢ stamp in the left image below, was also depicted on a strip of five stamps in 1982 (Scott 289).

Since Norfolk Island is no longer self-governed, mail is now handled through New South Wales, and Norfolk Island stamps include the name “Australia” on them, as seen on the souvenir sheet in the center image below.

Australia Post sells Norfolk Island’s current postal issues. Among these are a miniature sheet of two different designs of Norfolk Island seabirds, pictured in the right image below, issued Sept. 20, 2016, and a miniature sheet with two stamps picturing Norfolk Island waterfalls, issued earlier this year on Jan. 17. The margin photo on the Waterfalls issue shows some of the rugged remnants of the island’s volcanic origins, around the waterfall.

So there’s no need to worry: Despite the recent political changes, Norfolk Island still has many beautiful stamps for us to collect.