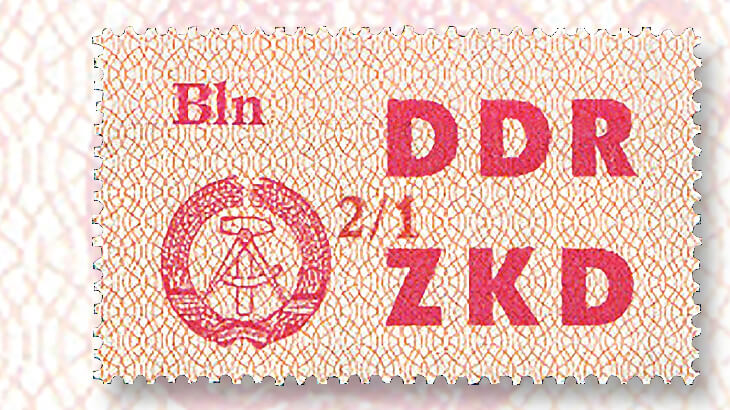 East German Central Courier 1964 course control marks, a type of Official stamp, are worth picking up at a few dollars each if you find them in cinderella lots or accumulations.

In East Germany, almost all economic and industrial activity was state controlled. In 1964, two series of 84 nondenominated Official stamps each were issued for use as course control marks for the Associations of Public Owned Operations (state run enterprises — Vereinigung Volkseigener Betriebe, or VVBs).

The design shows the East German crest featuring a compass, hammer, and heads of rye. The stamps are inscribed “DDR ZKD” and, in smaller letters, with a three-letter abbreviation for the enterprise by which they were used. These stamps are not listed in the 2017 Scott Standard Postage Stamp Catalogue because they had no franking power.

These stamps are listed as 31 I-45 and 46 I-60 and valued in Vol. 2 of the Michel Deutschland-Spezial Katalog. Individual stamps are valued at €35 to €40 (approx. $37.50 to $43) in mint never-hinged condition. Stamps in used condition are scarcer and more valuable.

A mint never-hinged complete set of the first series recently sold in an online auction for the equivalent of $999 against a Michel catalog value of €2,800. Most of the demand appears to be for complete sets. Single stamps and multiples occasionally turn up unrecognized in stamp mixtures and cinderella lots. If you can get them for a few dollars or less apiece, they are worth buying.