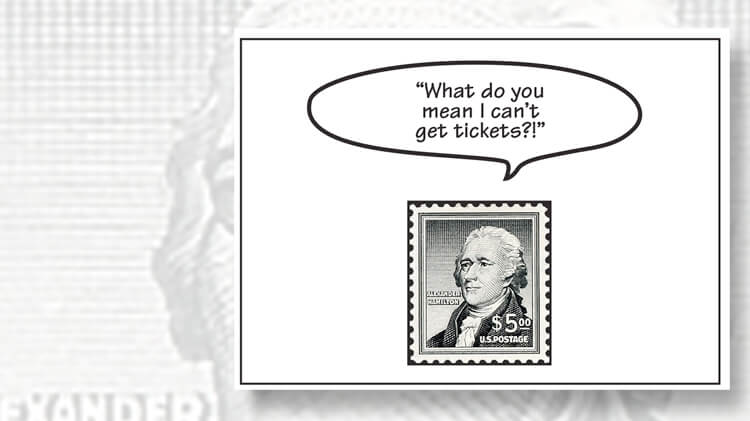 The winner of the nonphilatelic part of the February cartoon caption contest featuring the 1956 $5 Alexander Hamilton stamp is Rich Spector of Dublin, Ohio, who reflects on the fact that the Broadway musical Hamilton is so popular that it is sold out well

Tickets to the extremely popular Broadway musical Hamilton have gone through the roof, and that was the phenomenon addressed by most of the entries in the February cartoon caption contest featuring the 1956 $5 Hamilton stamp in the Liberty series.

For example, Gary Loew of Atlanta, Ga., brings in Hamilton’s origins with “Yikes! I can fly five round trips to Nevis, BWI for the cost of a ticket to see my own show!”

Another tack was taken by Lisa Woodridge of San Francisco, Calif., with “I’m quite familiar with sticker shock!”

Hamilton’s disagreements with Vice President Aaron Burr motivated another group of entries. The result of their rivalry was a duel July 11, 1804, in which Burr mortally wounded Hamilton.

Burr was not injured, but the event resulted in his being charged with murder in both New York and New Jersey. Though the charges were dropped in one state and he was acquitted in the other, his political career was ruined.

A number of entries noted that Burr won the duel but Hamilton got the stamp. Jack Leonard of Hatboro, Pa., sent the line, “I hope this isn’t a duel issue!”

Rich Spector of Dublin, Ohio, supplied the line that won the nonphilatelic part of the contest. His entry reflects on the fact that, despite high ticket prices, Hamilton is sold out for every performance well into the future.

On the philatelic side, John Hostetter of Lancaster, Pa., won with “I’ve arrived! I’m on money. I’m on stamps. And now I’m on Broadway!”

“Duel? I thought you said I was going to do a duet with Mr. Burr!” from Steve Kotler of San Francisco, Calif.

“In big hair we trust!” by Jack Trammell of Mineral, Va.

“Tell me … Just what is a postage stamp?” sent by Simon Halburian of Saguache, Colo.

“Now we would settle our differences with tweets not duels,” from an anonymous Linn’s reader.

“Would have bet 5 bucks that no one would ever sing my praises on Broadway!” sent by Richard Thornton of Valparaiso, Ind.

“I’m off to Yorktown … Give my regards to Broadway!” from Mildred Barylski of Warrenton, Va.

The next cartoon caption contest will be announced in the April 10 Linn’s.