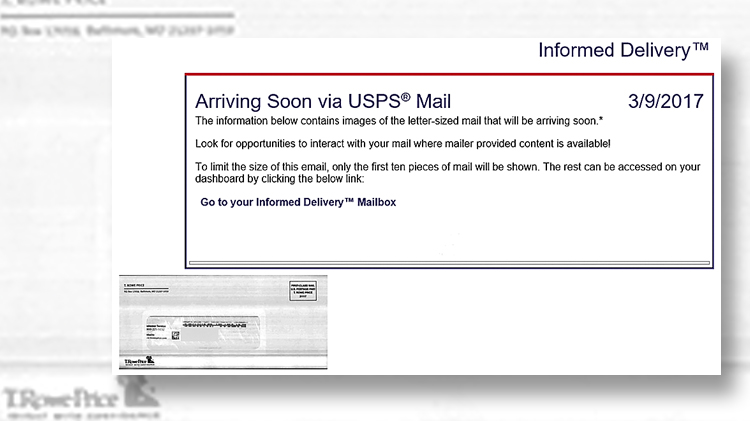 The U.S. Postal Service is testing an online program called "Informed Delivery," which allows customers to see images of their mail before it is delivered. This screen shot, from author Bill McAllister's computer, shows the Informed Delivery announcement

Ever since the Internet robbed the United States Postal Service of what it used to call the “mail moment,” postal officials have been seeking a way to restore some of the magic that snail mail used to have.

The latest effort, called “Informed Delivery,” arrived at my computer at 7:58 a.m., long before a letter carrier entered the subdivision where I live.

It was an email from the USPS giving me five images of letters I was to receive that day — two presorted first-class and three presorted standard mailings.

Postmaster General Megan J. Brennan says this new test program, which should be nationwide later this year, “puts the power of mail onto digital channels.”

Informed Delivery is a blending of the Postal Service’s mail-scanning process, which takes a picture of every mailpiece.

The resulting grayscale images are sent via e-mail to the requesting addressee every morning, giving customers a peak at the mail that should arrive later in the day. Color images might come later.

“Getting notifications through email is part of the daily digital lives of the American public,” says a USPS fact sheet.

“Informed Delivery engages customers where they want to be — in a mobile and digital environment,” Brennan said when she disclosed plans for the program in a Nashville speech a year ago.

So what’s in it for the U.S. Postal Service?

Brennan says she hopes direct mailers will start placing advertisements on their mailpieces, to be read hours before the mail arrives.

“This is an incredibly powerful product for this industry,” she said.

I discovered the product by chance, while reading the Postal Service’s “Newslink” online. For details about the service in your neighborhood, go to the Informed Delivery website.

To my delight, Informed Delivery is an accurate predicator of what mail I’m going to get each day.

The focus is on that disappearing mail product, first-class mail.

Not every mail piece is available, but up to 10 a day are.

The plan is to add flats, magazines, and catalogs in the future, according to the USPS website.

FedEx Corp. is likely to remain the biggest supplier to the U.S. Postal Service through 2024.

The Memphis-based corporation has announced that its FedEx Express subsidiary has extended a 2013 agreement to serve as a primary transporter of U.S. mail.

It said Feb. 23 that its FedEx Express subsidiary should receive about $1.5 billion in postal revenues each year under the contract.

“We are pleased to be able to extend this agreement and to continue the outstanding service that FedEx Express has provided to the USPS for more than 16 years,” David J. Bronczek, president and chief operating officer of FedEx, said in a news release.

“This contract provides USPS with the operational reliability and flexibility they have come to expect from FedEx.”