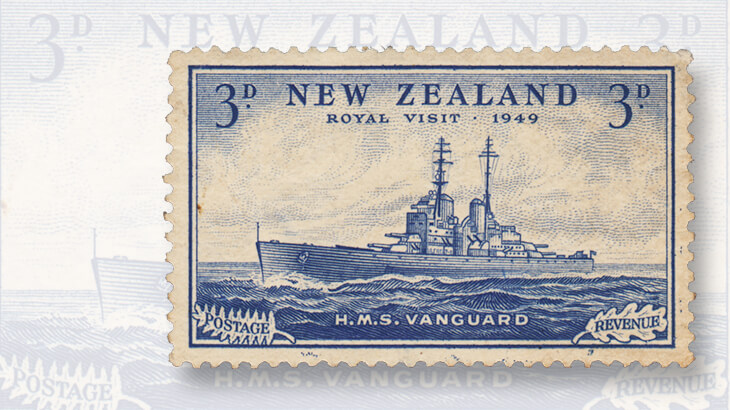 This New Zealand stamp depicting HMS Vanguard escaped being incinerated after the set to which it belonged was canceled. Last sold in 1993, it set a record for a New Zealand issue when Mowbray auctioned it March 11 for $47,800.

Every stamp, they say, tells a story. The most intriguing stories are often told by stamps that never saw the light of day.

Britain’s Queen Elizabeth II has reigned for so long now — 65 years and counting — that the reign of her father, King George VI, seems poignantly brief by comparison. He reigned for a little more than 15 years, from Dec. 11, 1936, to Feb. 6, 1952.

The king was never a particularly healthy man to start with, and the stress of leading the Empire through World War II, combined with a heavy smoking habit, led to a steady deterioration in his health during his final years.

One of the casualties of his poor health was the cancellation of his planned royal visit to New Zealand and Australia in 1949.

As Duke and Duchess of York, he and his wife Elizabeth had visited in 1927, but the new trip would have marked the first-ever visit of a reigning monarch Down Under.

The royal party was to comprise the king, queen, and their younger daughter, Princess Margaret. Princess Elizabeth (the future queen) and her husband Philip had just had a baby, Charles, and opted to stay home.

As they had done on their visit to South Africa in 1947, the royal family was to travel aboard HMS Vanguard, Britain’s largest and fastest battleship.

A great many souvenirs were prepared to mark the trip, including a set of four commemorative New Zealand stamps.

As soon as the trip was called off, the stamps were ordered incinerated. And for many years, everyone believed that was what had happened.

Then, in 1979, two damaged examples of a hitherto unseen blue New Zealand 3-penny stamp, depicting HMS Vanguard and inscribed “Royal Visit 1949,” appeared in two different auctions. They seemed to be long-lost survivors of the abandoned issue.

A few more came out of the woodwork over the years, and the tally now stands at seven examples. The stamp is footnoted, but not valued, in the Scott Classic Specialized Catalogue of Stamps and Covers 1840-1940 after New Zealand Scott 272.

On March 11 in Wellington, New Zealand, the firm of Mowbray Collectables offered what they called “the finest” of the seven known. This example was last sold in Australia in 1993.

The mint, lightly toned stamp seems largely unscathed for its close call with a furnace door. Including the 15 percent buyer’s premium added by Mowbray to all lots, it handily beat its presale estimate to sell for $67, 850 New Zealand dollars, the equivalent of US$47,800. The firm reported that the buyer lives in Asia.

That result represents a new world-record price for a New Zealand stamp. It more than doubles the previous record, which happened to be for another example of the same stamp sold by Mowbray in 2009.

No examples of the other stamps in the abandoned set have ever surfaced, although artist and die proofs of the designs have reached the market.

A 2d stamp pictured inset portraits of the king and queen over a view of Waitangi Treaty House, the site of a historic accord between Britain and the native Maori people in 1840.

A 5d denomination showed the king, queen and Princess Margaret, while a 6d stamp featured the British royal crown and scepter.

The 2d design was reproposed for an issue marking another royal visit, this time by Elizabeth and Philip in 1952.

That issue was likewise abandoned, however, because the 1952 tour got no farther than Kenya: the king died Feb. 6, and Elizabeth returned home, as queen, to mourn her father.

The 6d design from the 1949 series was resurrected as a 1-shilling-6d stamp commemorating Elizabeth’s coronation in 1953 (Scott 284).

A royal visit finally took place in 1954, when the young Queen Elizabeth II and her family made the historic first visit by a reigning monarch. Two stamps were issued to mark the trip (Scott 286-287).

As for the Vanguard, she would be the last battleship ever launched. Decommissioned a decade after the ill-fated stamp issue, she was scrapped in 1960.

Other lots in the Mowbray sale included a reconstruction of the full 240 positions of the Penny Black, the world’s first postage stamp, issued in 1840 (Great Britain Scott 1).

Every stamp in the sheet bore a pair of security check letters in the lower corners, with the left-hand letter signifying the row and the right-hand letter the column.

The letters on the top row therefore ran AA, AB and so on to AL, while those down the left side of the sheet ran AA, BA all the way down to TA.

The grouping covered a range of quality and grades, but did include five stamps from the scarce plate 11. The lot sold for US$54,300, which works out to an impressive $226-plus per stamp, well above the average price for a run-of-the-mill Penny Black.