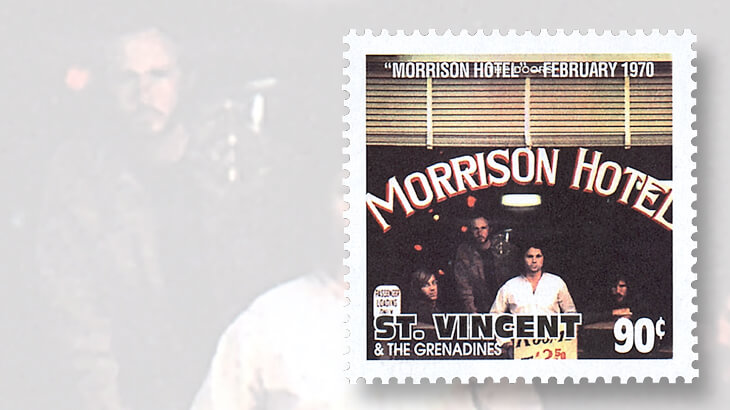 St. Vincent honored the Doors in 1997 by issuing stamps showing their album covers, including Morrison Hotel on the 90¢ denomination. 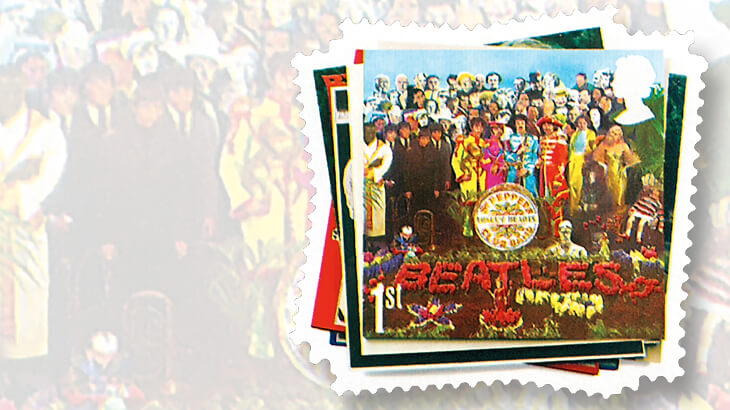 Sarah Vaughan is honored on a forever stamp in the United States Postal Service’s Music Icons series. The pane of 16 resembles a 45 record sleeve, and the stamp shows a portrait based on the photograph featured on the 1955 After Hours With Sarah Vaughan a

The logo of the Canadian rock trio Rush first appeared on the interior gatefold cover of the album 2112. Called Starman, this logo also is pictured on a stamp from Canada. 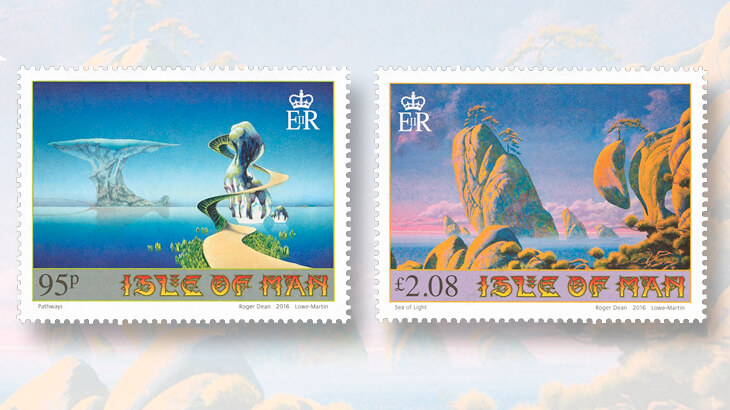 The Isle of Man issued a set of stamps in August 2016 displaying the album cover art of Roger Dean in conjunction with an exhibition of his work. The 95-penny stamp shows the painting for the cover Yessongs by Yes, and the £2.08 stamp depicts Sea of Light 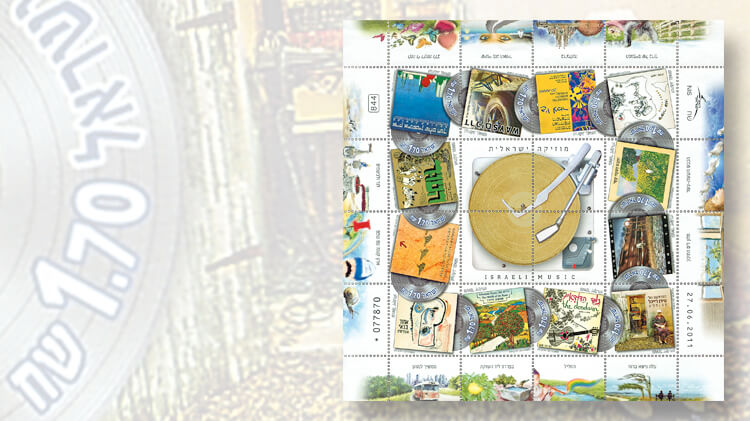 Images of album covers represent several decades of Israeli music on this pane of 12 se-tenant stamps issued in 2001. 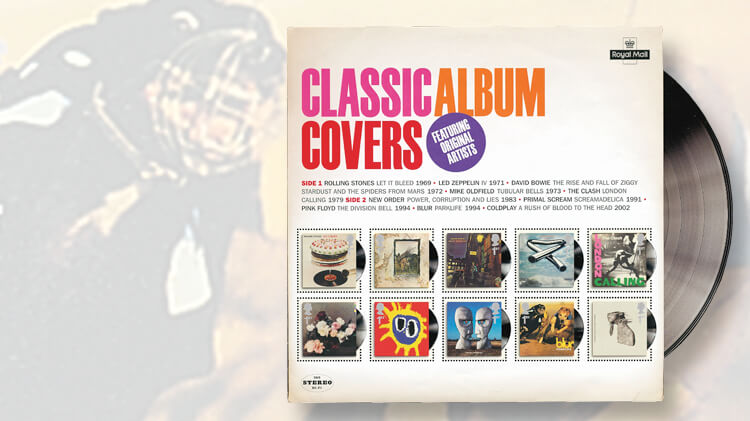 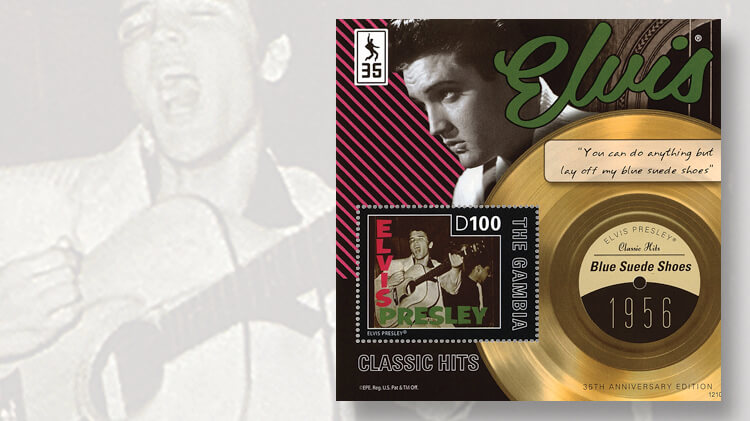 As part of a tribute to Elvis Presley, the stamp on this souvenir sheet from The Gambia depicts the cover of his 1956 self-titled album. 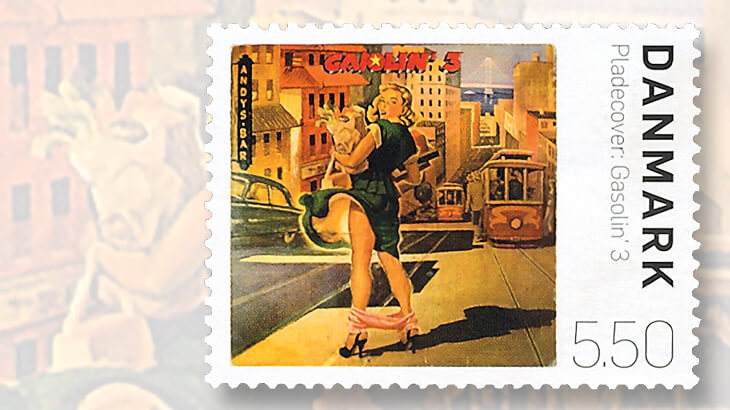 Listeners of a Danish radio station were asked to select the most memorable album cover of the past 50 years. Their selection, Gasolin’ 3, is shown on this stamp issued in 2010. 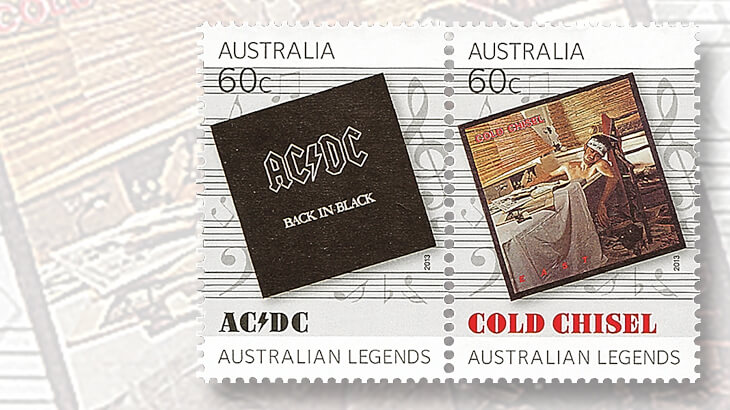 Some of the stamps in Australia’s 2013 Musical Legends issue feature album covers. This se-tenant pair of 60¢ stamps shows Back in Black by AC/DC and East by Cold Chisel.
Previous
Next

Topics on Stamps  — By Denise McCarty

Music, graphic arts and pop culture are nearly limitless topics when it comes to collecting stamps, but combining all three can lead to a relatively small collection of album cover art.

More than any other postal administration, Great Britain’s Royal Mail has featured album artwork on its stamps, even devoting an entire set of stamps to the subject.

The 10 stamps in Royal Mail’s Classic Album Covers set were issued Jan. 7, 2010 (Scott 2724-2743), in various formats, including sheets of 50, a prestige booklet (with text and illustrations in addition to stamps), and a souvenir sheet that resembles a greatest hits album cover.

In announcing the set, Julietta Edgar of Royal Mail said, “For decades the album sleeve has been the canvas for some of the most imaginative graphic artists in the world, and this issue celebrates this unique art form and some of its great examples.”

In chronological order by release date of the album, the stamps depicts Let It Bleed by the Rolling Stones, 1969; the untitled fourth album by Led Zeppelin (also known as Led Zeppelin IV), 1971; The Rise and Fall of Ziggy Stardust by David Bowie, 1972; London Calling by the Clash, 1979; Power, Corruption and Lies by New Order, 1983; Screamadelica by Primal Scream, 1991; The Division Bell by Pink Floyd, 1994; Parklife by Blur, 1994; and A Rush of Blood to the Head by Coldplay, 2002.

The artwork for these album covers came from a variety of sources, including photographs, existing art and even a chef. Delia Smith, an author of cookbooks and host of television cooking shows in England, decorated the wedding cake pictured on the Let it Bleed cover. The cake toppers are the members of the Rolling Stones at the time: Mick Jagger, Keith Richards, Charlie Watts, Bill Wyman and Brian Jones. American graphic artist Robert Brownjohn designed the album cover.

How did Royal Mail select what album covers to honor on the stamps? It asked graphic designers and music journalists to submit lists of what they felt were the most significant album cover artwork on records by British musicians.

Noticeably absent from the list are any albums by the Beatles. That may be due to the fact that Royal Mail had already pictured Beatles album covers on six stamps (Scott 2421-2426) in a Jan. 9, 2007, issue commemorating the first meeting of Paul McCartney and John Lennon in 1957.

Each self-adhesive stamp depicts a stack of Beatles albums with one album prominently displayed on the top. The stamps are in se-tenant (side-by-side) pairs. The  first-class pair features With The Beatles, 1963; and Sgt. Pepper’s Lonely Heart’s Club Band, 1967. The 64-penny stamps show Help!, 1965; and Abbey Road, 1969. Illustrated on the 72p stamps are Let It Be, 1970; and Revolver, 1966.

Sgt. Pepper has topped many lists of the best album covers of all time, including a 2011 Rolling Stone readers’ poll. In announcing the results, the magazine said: “The cover of the Beatles’ 1967 LP Sgt. Pepper’s Lonely Hearts Club Band is, without a doubt, one of the most iconic images in the history of rock & roll. The photo was originally going to show the Beatles (in their Sgt. Pepper’s outfits) playing in a park. That slowly evolved into the final concept, where they stand amidst cardboard cutouts of their heroes. The band originally planned to includ Leo Gorcey, Gandhi, Jesus Christ and Adolf Hitler in the photo. Common sense kicked Hitler off the cover (though they did create an image of him), the still-lingering bitterness of Lennon’s “bigger than Jesus” comment kicked Jesus off the cover and Gandhi got the boot over concerns that India wouldn’t print the album.”

Pink Floyd and David Bowie, both represented on the 2010 Classic Album Covers set, were subsequently honored by Royal Mail on their own stamp issues displaying album cover art.

Storm Thorgerson of Hipgnosis created the designs of four of these album covers, in addition to the cover for The Division Bell pictured on a 2010 stamp.

An article in The New Yorker magazine printed after Thorgerson’s death in 2013 said of his prismatic triangle design for Dark Side of the Moon, “As the album became a classic-rock monolith, remaining on the Billboard chart for more than seven hundred weeks, the cover became an icon of classic rock — and of modern commercial art — in its own right.”

This year’s David Bowie set (issue date March 14) depicts the covers of Hunky Dory, 1971; Aladdin Sane, 1973; Heroes, 1977; Let’s Dance, 1983; Earthling, 1997; and ? (Blackstar), 2016.  There is more than meets the eye on the cover of Bowie’s final album. In reporting on cover designer Jonathan Barnbrook’s recent Grammy win in the recording package category for Blackstar, the Los Angeles Times said, “Barnbrook’s design features a cut-out star on an all-black sleeve, hidden images that only reveal themselves when held to the light and at least a few secrets that have yet to be cracked.”

The Pink Floyd and David Bowie sets are the first two in a Music Giants series. The designs follow the same style as the 2010 Classic Album Covers set, picturing vinyl albums emerging from the covers.

Six stamps from the Isle of Man salute the work of artist Roger Dean, who has designed album covers featuring surrealistic landscapes for Yes and other bands. The stamps were issued Aug. 19, 2016, in conjunction with an exhibition of Dean’s work at the Manx Museum in Douglas. Both the exhibition and the stamp set are called “Islands and Bridges.”

Former Yes keyboardist Rick Wakeman said, “ … Roger’s art has a way of leading me gently into the canvas to embark on a journey of never-ending discovery. There always seems to be something new to discover, and that is where his association with music really stands out … “

Unlike the stamps from Great Britain, only the paintings are shown on this Manx stamps; the name of the band, title of the album and other typography from the cover are not included. However, the country name “Isle of Man” appears at the bottom of each stamp in the style of the logo Dean created for the band Yes.

Artwork called Blind Owl Late Landing, for an unreleased album, is reproduced on the 77p stamp.

The £2.08 high denomination of the set depicts the cover of Sea of Light, a 1995 album by Uriah Heep. The 45p stamp shows Dean’s painting Meeting Place, which was inspired by the Isle of Man.

The Caribbean island of St. Vincent was the first to picture album covers on stamps with its Nov. 5, 1997, issue honoring the Doors (Scott 2503-2508). The 90¢ low denomination depicts Morrison Hotel. The cover of this 1970 album reproduces a photograph by Henry Diltz, whose work appears on more than 100 album covers.

On the Morrison Hotel photography website, Ditz said of the photograph: “This was a transient hotel in Downtown LA on Hope street. The Doors didn’t have permission to take this picture, so when the lobby was empty, they ran in quickly and sat behind the window. This became the Morrison Hotel album cover.”

Graphic artists who design album covers are influenced by many sources, including other album covers.

The aforementioned London Calling by the Clash mimics the cover of Elvis Presley’s 1956 self-titled album. Part of the Presley album can be seen on a stamp in a souvenir sheet from The Gambia (Scott 3444).

From Australia, the cover of Cold Chisel’s 1980 album East recreates the 1793 painting The Death of Marat by Jacques-Louis David. This album cover can be found on stamps in Australia’s 2013 Musical Legends issue (Scott 3820-3829), along with the covers of albums by AC/DC, INXS and Men at Work.

A 2010 stamp from Denmark (Scott 1479) features album artwork that was borrowed without permission.

The story behind the cover art started at Andy’s Bar in Copenhagen, where members of the Danish rock band Gasolin’ saw a painting of a pin-up girl and San Francisco’s cable cars. They wanted to use the image for the cover of their upcoming album, Gasolin’ 3, but were not able to not find out who the artist was. After the album was released in 1973, Tage Hansen revealed that he had created the painting by combining a pin-up calendar by Art Frahm and a TWA poster by David Klein.

Tips on ways to expand a collection of album cover art on stamps will appear in a future issue of Linn’s.