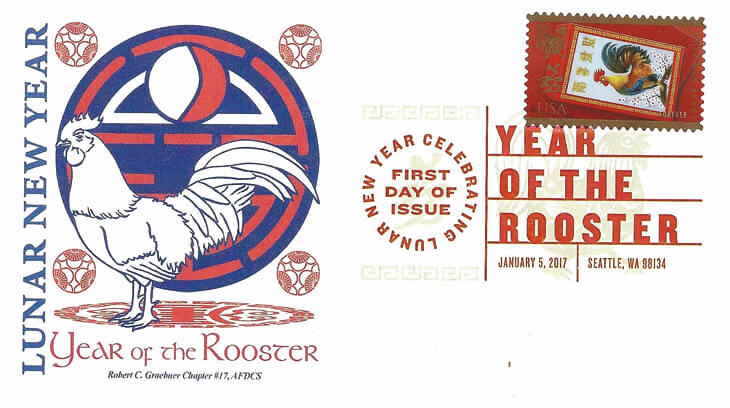 Digital color postmarks are available as first-day cancels for United States commemoratives and some other special issues. This example was created for the Year of the Rooster stamp issued Jan. 5. 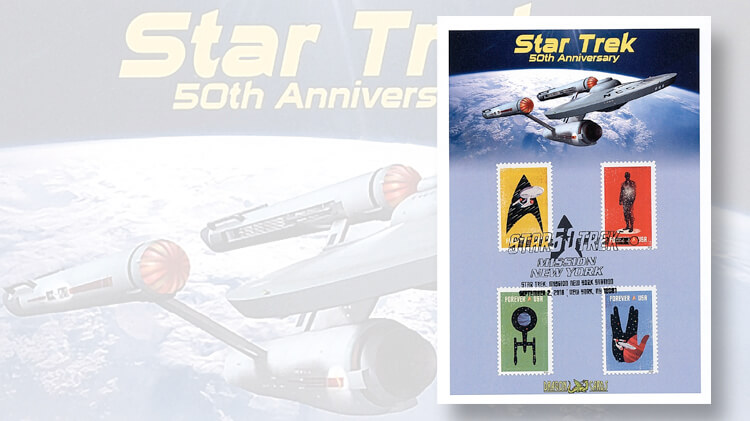 Special postmarks sometimes are offered in conjunction with an event that included a stamp release, such as the “Star Trek: Mission New York” exhibition. 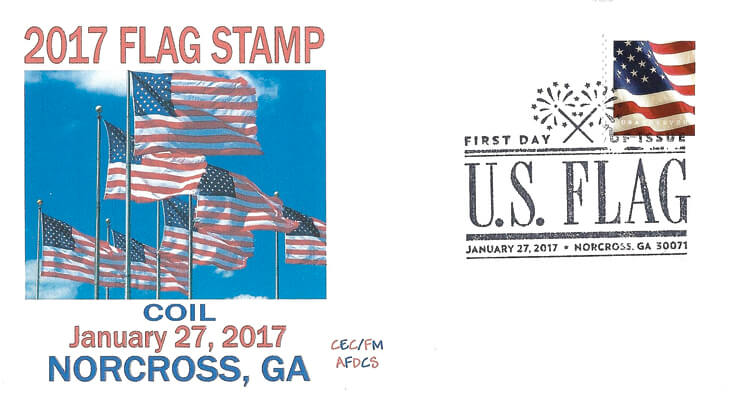 This pictorial postmark or a standard four-bar cancel were the only available first-day cancel options for the five U.S. Flag forever stamp varieties issued Jan. 27. 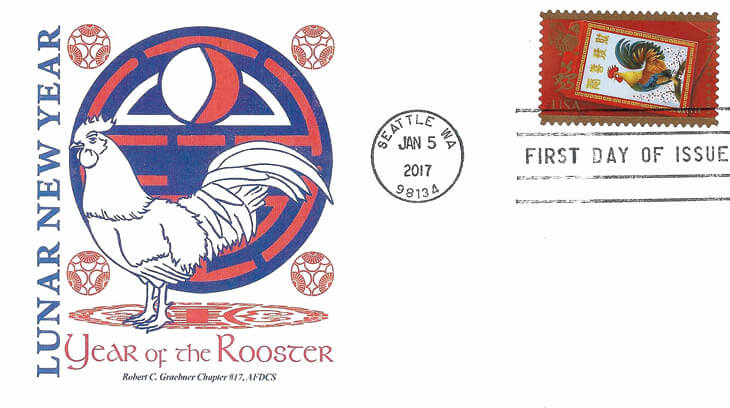 A machine-applied steel die hub first-day cancel is similar to the four-bar hand cancel, but its appearance is noticeably different. This example for the Year of the Rooster stamp can be compared to the black four-bar hand cancel shown previously for the 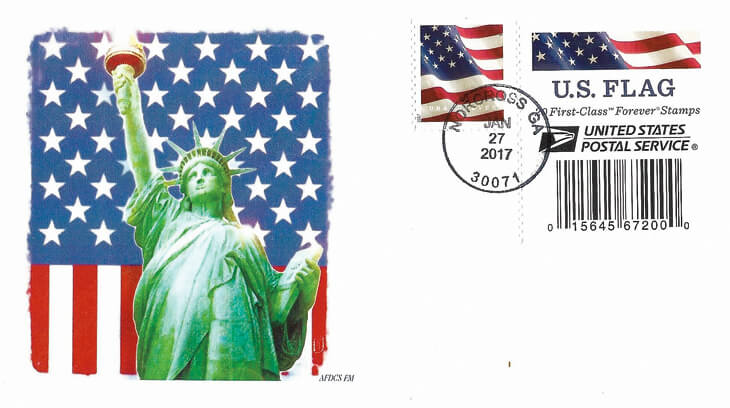 Sometimes the bull’s-eye cancel is the best fit for tying a group of stamps to a cover or, in this case, the new Flag forever stamp with the label from its booklet pane. 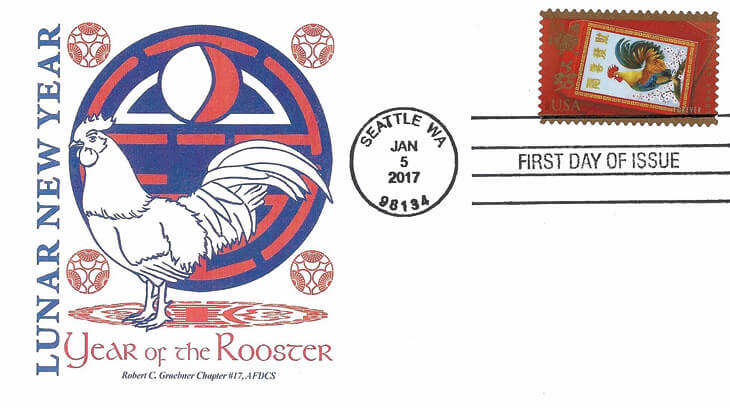 All new issues have black hand cancels available, either pictorial or the basic four-bar design.
Previous
Next

A reader asks if all United States new issues get three different first-day cancels: a digital color postmark, a black hand cancel (or, more accurately, a rubber-composition cancel) and a bull’s-eye.

The answer is no — but some issues get four or five.

So far, digital color postmarks are offered only for commemorative and special issues such as holiday stamp subjects.

The first-day cover by the Robert C. Graebner Chapter of the American First Day Cover Society with a digital color postmark for the Year of the Rooster forever stamp is shown in the first illustration above.

All new U.S. issues do have black hand cancels available, although some are pictorial and some are the basic “First Day Of Issue” four-bar design, such as appears in the first image below: another Graebner FDC for the Year of the Rooster stamp.

Although commonly called a “hand cancel,” these postmarks are technically rubber-composition cancels, and may, in fact, be applied by a machine at the U.S. Postal Service’s Cancellation Services unit.

An AFDCS cover shown in the second image below for the U.S. Flag forever stamp issued Jan. 27 was canceled with the pictorial postmark, which was the only first-day cancel other than the bull’s-eye available for this issue. All new issues have bull’s-eye cancels (a circular cancel alone with the first-day date and city name inside the circular element, known as the “dial”), which is the same size and configuration of the standard first-day postmark, even if one of the latter markings was not offered for issue.

United States first-day cover servicing policy does not permit the use of the full first-day cancel more than once on a cover. If additional cancellations are needed to tie all the stamps, then the bull’s-eye should be used.

The bull’s-eye is also a good alternative for covers where the combination of the stamps and cachet would not be optimal for a pictorial postmark or digital color postmark.

The FDC for the Flag stamp with a Statue of Liberty cachet, shown below, uses the label from the booklet pane, which is tied to the cover and stamp with a bull’s-eye cancel. All issues have a machine (more accurately, “steel die hub”) cancel. These are almost always similar to the four-bar hand cancel, and are applied by a pair of obsolete canceling machines at USPS Cancellation Services, maintained expressly for first-day covers. Another type of cancel is called the special postmark, often a pictorial marking, intended for use by local post offices other than that of the first-day city.

These postmarks are considered “field pictorials” and generally are available only from the participating post offices for 30 days from the date of issue.

The post offices’ participation is voluntary, and the date offered may or may not be the first day of sale.

The recent Year of the Rooster, Oscar de la Renta and John F. Kennedy issues all had these “special” postmarks available to participating local post offices.

Additionally, local post offices in the first-day cities may have special postmarks for the event of which the stamp issuance was a part, such as a stamp show.

The Star Trek forever stamps’ first day on Sept. 2, 2016, was part of an exhibition called “Star Trek: Mission New York.” A special postmark was offered, as shown in the below illustration, on one of the author’s Dragon Cards FDCs. This postmark, by the way, was applied by Cancellation Services in Kansas City, not by the New York City post office.

The local post offices are supposed to notify Postal Service headquarters of their use of these and other field pictorials, but this is not always done, or done promptly, and the notices may appear in the USPS Postal Bulletin too late for collectors to obtain the postmarks on their covers. The quality of application of these cancellations may vary widely, too.

Of course, with putative nationwide distribution of each issue on its first day, postmarks and cancellations from many other post offices and events are possible, but those described in this column are the “official” first-day cancellations.