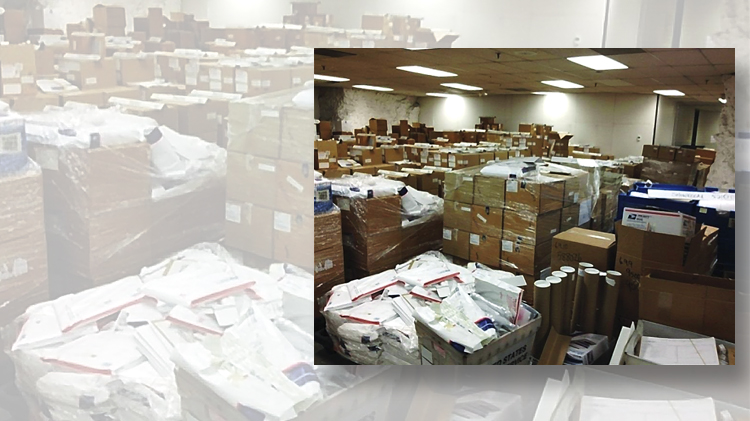 At the same time at his offices in the underground stamp center known as “the caves,” Hussain was giving away, or selling at discounted prices, philatelic products sent to his facility for disposal or destruction.

The problem, the agents say, is that neither operation had approval from U.S. Postal Service headquarters in Washington, D.C.

That’s the ugly picture that emerges from a newly released investigative report.

Although heavily redacted, the report points to serious management issues the inspectors say they uncovered during a nearly six-month investigation that ended in April 2016.

The 42-page document was released to Linn’s under a Freedom of Information Act request.

It listed five violations of postal codes and federal regulations by the facility’s former manager, problems that go beyond the previously reported sale of Harry Potter stamps to Royal Mail at 35 percent below face prices.

The report also hints that Hussain, head of the center from 2005 to 2016, could face legal action.

The USPS Office of Inspector General said it was withholding some of the investigation's details because they may have been “compiled for law enforcement purposes.”

The report says stocks of Simpson stamps and Lunar New Year stamps, as well as the Harry Potter commemoratives, could be involved.

Although many details have been removed from the report, what’s exposed among the often blank pages is a portrait of a postal executive operating outside of the strict stamp rules that postal workers must obey.

Not only may have Hussain sent stamps to the British postal service without any written contract between 2009 and 2015, he also is alleged to have stocked a “showroom” at the caves with unsold philatelic goods that post offices across the country failed to sell, the newly disclosed report says.

Those items were then sold, agents say, often at 80 percent of listed prices. These sales, however, were not recorded.

Revenue that should have gone to the Postal Service “therefore is impossible to track,” the report says.

The value of the United States stamps delivered to Royal Mail apparently is known, but that figure was deleted from the report.

The USPS likes to sell its stamps to foreign postal administrations, but the inspectors said they could not find signed sales agreements between the USPS and Royal Mail. Nor could they find any record of Royal Mail payments to the Postal Service.

The unauthorized shipments of U.S. stamps to England came after Hussain exchanged e-mails and held “in person meetings” with “Royal Mail representatives,” the report says.

Even the agents were given some of the items when they appeared at the center in October 2015 to investigate a complaint filed with the USPS ethics office.

Agents had been tipped off about the unauthorized sales to Royal Mail and the sales of excess philatelic products in the “showroom.”

The investigation is not the first time that OIG special agents have questioned operations at the Kansas City center.

In mid-2015, the Postal Service’s inspector general sharply criticized the way the center handled distribution of the 100 intentionally produced upright $2 Jenny Invert stamp panes, noting that three of the valuable panes were given at no cost to three customers who had placed previous orders with SFS.

Hussain’s name was deleted from the released report, although the report and previously released material make clear that he was the focus of the investigation.

In a June 8 response to a previously released “Management Alert,” James P. Cochrane, the Postal Service’s chief marketing officer, said “headquarters holds the manager, Stamp Fulfillment Services responsible and accountable for all his/her actions, the same as all other USPS managers and executives.”

Hussain has not responded to an e-mail request from Linn’s for comment on the latest report.

His Linkedin webpage states his tenure at the Postal Service ended in 2016.

Nor did Royal Mail respond to Linn’s request for information about whether it had resolved the issue of payments to USPS for the stamps Hussain apparently shipped to them.

Mary-Anne Penner, director of Stamp Services for the Postal Service, who was Hussain’s immediate supervisor, did not respond to Linn’s request to be interviewed.

“The Postal Service does not comment on personnel matters,” said USPS spokesman David Partenheimer in a statement to Linn's.

“That being said, the Postal Service does follow established Postal Service policies to ensure accounting for and disposal of off-sale retail merchandise and accountable paper,” he said.

“Furthermore, the Postal Service holds all managers responsible and accountable for their actions to properly ensure oversight, management, and protection of postal assets and compliance with Postal policies.”

The USPS has released reports in the past naming senior officials accused of wrongdoing.

According to Hussain’s Linkedin page, he had been with Stamp Fulfillment Services since 1997.

He first served as its information technology manager, then operations manager, and since June 2005 as executive manager.

“I am an executive who is successful at leading high-volume complex and diverse operations,” he said on his Linkedin page.

“Under my leadership, savings were achieved and the merger was completed on schedule,” he says.

Hussain says revenues at the center have grown to more than $500 million from $120 million in the past 10 years.

He also says he holds four patents, including one for “the USPS exclusive Digital Color Postmark” used on first-day covers.

“I was also awarded a patent for a unique stamp affixing machine in 2013,” he says. “It is the only one in the world.”

The cover sheet says the Office of Inspector General sent the case “to USPS for administrative action.”

Here are five issues it raised about Hussain’s role at the center were:

1. Violation of USPS policy concerning destruction or disposal of unsold inventories of stamps and philatelic products, putting such items in a storage room known as "the showroom.”

2. He “failed to properly oversee the showroom, which placed the Postal Service inventory at risk for unauthorized use.” This “enabled use of improper accounting procedures for generated revenue, increasing the risk of errors, losses and embezzlements and frustrating their timely detection.”

5. He “violated the standard of ethical conduct when he solicited employment assistance … from a Postal Service contractor employee with Northrup Grumman who was the point of contact for hiring employees to work at the SFS Center.”