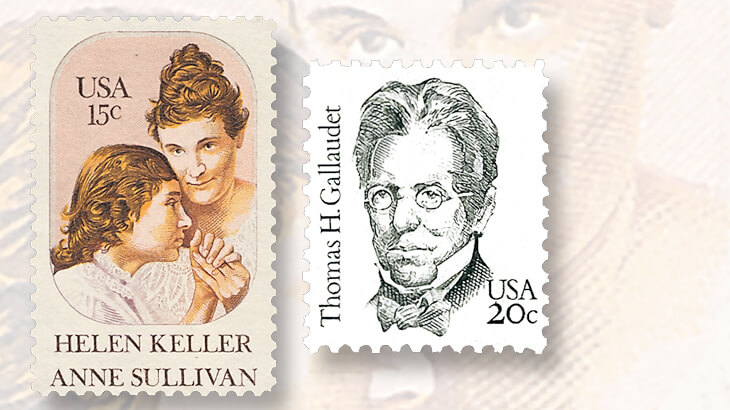 Prominent teachers of deaf students featured previously on U.S. stamps include Anne Sullivan, shown with her student Helen Keller on a 1980 commemorative, and Thomas H. Gallaudet, honored on a 20¢ definitive issued in 1993. 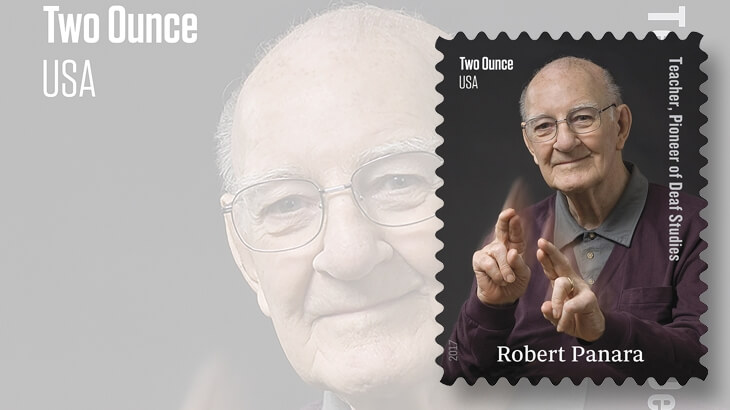 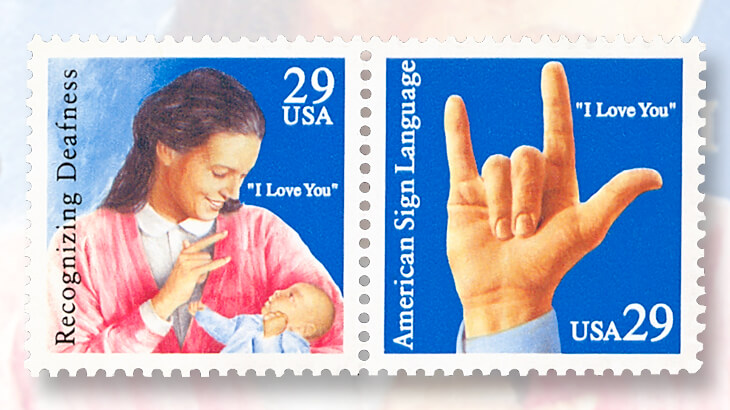 Two 29¢ stamps issued together in 1993 show a woman signing “I love you” to her infant, and a hand communicating the same phrase.
Previous
Next

Robert Panara, a leading educator who advanced innovative techniques for teaching the deaf, is being honored on a new United States stamp in the Distinguished Americans definitive series.

The nondenominated (70¢) 2-ounce-rate forever stamp will be issued April 11 in Rochester, N.Y., where Panara taught at the National Technical Institute for the Deaf at Rochester Institute of Technology.

A first-day ceremony, open to the public, will take place at 10 a.m. at the Robert F. Panara Theatre at Lyndon Baines Johnson Hall, 52 Lomb Memorial Drive, in Rochester, on the Rochester Institute of Technology campus.

The U.S. Postal Service notes that the public can register online to attend the event.

The stamp issuance coincides with the 200th anniversary of the 1817 founding of the American School for the Deaf in Hartford, Conn., according to the Postal Service.

The Robert Panara stamp will be issued in panes of 20 that are offset-printed by USPS contractor Banknote Corporation of America in Browns Summit, N.C.

The stamp features a photograph of Panara signing the word “respect.” The photograph was taken by Rochester Institute of Technology alumnus Mark Benjamin, who is the official photographer for the National Technical Institute for the Deaf.

The stamp inscription “Teacher, Pioneer of Deaf Studies” is printed in white reading down from the upper-right corner. “Robert Panara” is printed along the bottom edge.

Though known and honored as a teacher, Robert Panara was a scholar of deaf culture, an interpreter of the arts, and a poet whose collection On His Deafness and Other Melodies Unheard was published in 1997.

Panara helped to establish the National Technical Institute for the Deaf in 1967 and joined the staff as its first deaf professor, developing the curriculum and founding the English and Theater programs.

He taught classes that brought together hearing and deaf students.

“I have been teaching deaf and hearing students in the same class,” Panara said during a 1984 workshop at Johnson County Community College in Kansas. “I enjoy that challenge. It was my good fortune to be the first deaf teacher to teach both hearing and deaf students together.

“Panara’s love of drama and theater made his classes some of the most sought after by both deaf and hearing students,” wrote Vienna McGrain of the Rochester Institute of Technology’s University News.

Panara’s wife Shirley, who was also deaf, died in 2003. Like his father, their son John Panara teaches English at the National Technical Institute for the Deaf.

The new stamp is identified by the Postal Service as the 16th issue in the Distinguished Americans stamp series that began in 2000 with the 10¢ stamp honoring Gen. Joseph W. Stillwell (Scott 3420).

The first 12 stamps in the series, issued from 2000-09, are small (measuring 0.84 inches by 0.99 inches overall) and feature illustrations created by Canadian artist Mark Summers using the scratchboard technique (Scott 3420-3436).

The last three stamps from this group had color highlights added to Summers’ monochrome portraits.

Though the stamp design was a dramatic departure from the earlier issues, the Postal Service identified the Hobby stamp as the newest issue in the continuing Distinguished Americans series.

It was followed in 2012 by a nondenominated (45¢) forever stamp honoring actor Jose Ferrer, with a similar design but prepared with the design elements arranged vertically (Scott 4666).

The design of the Panara stamp takes another new turn, as it features a full photograph rather than the nearly square color illustrations featured as the vignette for the previous three stamps.

The Panara stamp is only the most recent U.S. issue to highlight deaf awareness and to honor a deaf teacher.

Anne Sullivan, who suffered hearing loss herself, was honored on a 15¢ commemorative stamp in 1980 with her famous student, Helen Keller (Scott 1824).

Thomas H. Gallaudet, a pioneer in education for the deaf, founded the American School for the Deaf, where Robert Panara learned to use sign language. Gallaudet is honored on a 20¢ definitive stamp issued in 1983 (Scott 1861).

Gallaudet University, where Panara later studied and taught, was founded by Edward M. Gallaudet, the son of Thomas H. Gallaudet.

Among numerous deaf or partially deaf individuals previously honored on U.S. stamps are Thomas Edison, first honored on a 3¢ stamp issued in 1947 (Scott 945); and anthropologist Ruth Benedict, on a 46¢ stamp from 1995 (2938).

A se-tenant pair of 29¢ stamps captioned Recognizing Deafness and American Sign Language was issued in 1993 (Scott 2783-2784), with designs showing a mother signing “I love you” to her infant, and a hand signing the same phrase.

Technical details and first-day cancel ordering information for the Robert Panara stamp can be found below.

Standard ordering instructions apply. Collectors requesting first-day cancels are encouraged to purchase their own stamps and affix them to envelopes. The first-day cover envelopes should be addressed for return (a removable label may be used), and mailed in a larger envelope addressed to FDOI-Robert Panara Stamp, USPS Stamp Fulfillment Services, 8300 NE Underground Drive, Suite 300, Kansas City, MO 64144-9900.

Requests for first-day cancels must be postmarked by June 11.