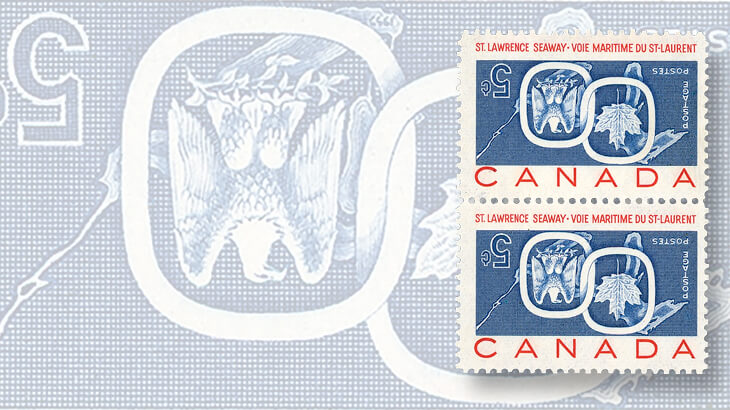 A rare mint multiple of Canada’s 1959 5¢ St. Lawrence Seaway error with center inverted will be offered during the March 21-24 auctions by Schuyler Rumsey Philatelic Auctions.

The Gems sale is filled with United States postal history and classic stamps, including a substantial number of highly graded stamps.

Also included are Confederate States postal history, Hawaii stamps and covers, and a selection of other worldwide material.

Canada is represented by some of the rare items in this sale, with a used example of the 1851 12-penny black Queen Victoria (Scott 3)sporting ample to clear margins. The stamp has been expertly repaired, Rumsey notes, and comes with a 1983 Friedl certificate.

Another Canadian treat comes from more than a century after the first appearance of the 12d stamp. Buyers have their choice of three different lots offering the 1959 5¢ St. Lawrence Seaway error with center inverted (Scott 387a): a mint never-hinged single, a used single on piece, and a rare multiple in the form of a mint never-hinged vertical pair.

The material for both sales is compiled in two catalogs that can be viewed online, with online bidding options available.

These public auctions will take place at the Schuyler Rumsey galleries.