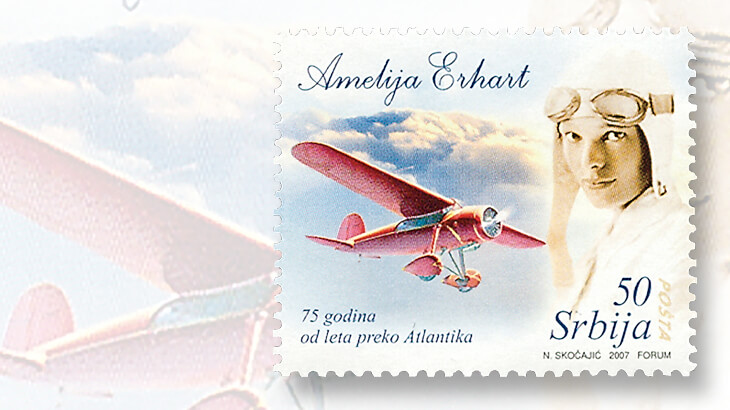 The Serbia 2007 50-dinar 75th Anniversary of Amelia Earhart’s First Transatlantic Flight by a Woman Pilot mint pane of eight with se-tenant label is in demand and selling in the $15-to-$20 price range.

The embattled nation of Serbia has been at or near the heart of many European wars in the 20th century: the First and Second Balkan Wars, World War I, World War II, the Third Balkan War (collapse of Yugoslavia), the Bosnia War, and the Kosovo War.

Serbia was the last nation to emerge from the smoking ruins of Yugoslavia after Montenegro declared its independence in 2006.

Serbian stamps reappeared in 2006 after last having been issued in 1920. On May 21, 2007, Serbia issued a 50-dinar stamp to honor the 75th anniversary of Amelia Earhart’s first trans-Atlantic flight by a woman pilot (Scott 388).

Aviation is one of the more popular areas of topical collecting, and enough Earhart stamps have been issued to form a sizeable Earhart collection on its own. There is broad collector interest in Earhart stamps, including many people with an interest in the subject who do not consider themselves to be stamp collectors.

80 years after Amelia Earhart’s disappearance, there’s demand for her 1963 U.S. stamp: If you have holdings of mint panes of 50 of the 8¢ Amelia Earhart stamp, now is a good time to offer them for sale.

The 2017 Scott Standard Postage Stamp Catalogue values the stamp in mint never-hinged condition and used condition at $2.50. It is currently selling in the $1-to-$2 range and supply is adequate to demand.

This stamp was isssued in panes of eight with a se-tenant label. The mint pane of eight is in demand and selling in the $15-to-$20 range. The prince might increase as the 80th anniversary of Earhart’s disappearance (July 2, 2017) grows closer.