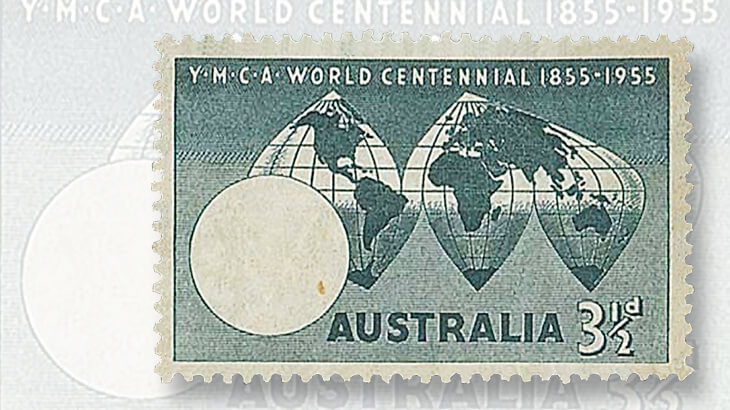 One of only two known color-missing errors of Australia’s 1955 3½-penny YMCA Centennial commemorative stamp will be offered by Spink during its April 19-21 auction series in London. The offered stamp, with red YMCA triangle absent, is the only known unuse

The Spink auction firm in London, England, will present three distinct auctions during the course of three days, April 19-21. The sales include the Foxley collection of Barbados, part I of the David Pitts collection of Bermuda, and Australian material from the Arthur Gray collection of Queen Elizabeth II predecimal issues.

The Gray collection sale “abounds with some of the most delightful die proofs, issued stamps, extremely rare errors, hand-drawn and annotated essays exhibiting stunning artwork and vivid depictions of Australian wildlife, and of course, Queen Elizabeth II,” according to Spink.

One of the errors on offer is the unique unused example of the 1955 3½-penny YMCA Centennial stamp with the red YMCA triangle emblem omitted. The only other known example is used on cover, and described by Spink as defective.

The stamp in this auction, with part original gum, has a tiny natural inclusion in the circle at left, some slight soiling “mainly on reverse,” and a few gum creases.

The David Pitts collection sale is the third in a series offering material from the Pitts collections of used British Empire, and includes postal history, stamps, and cancellations.

Auction catalogs have been prepared for each of the three Spink sales, and the lots can be viewed online, where online bidding opportunities also are available.