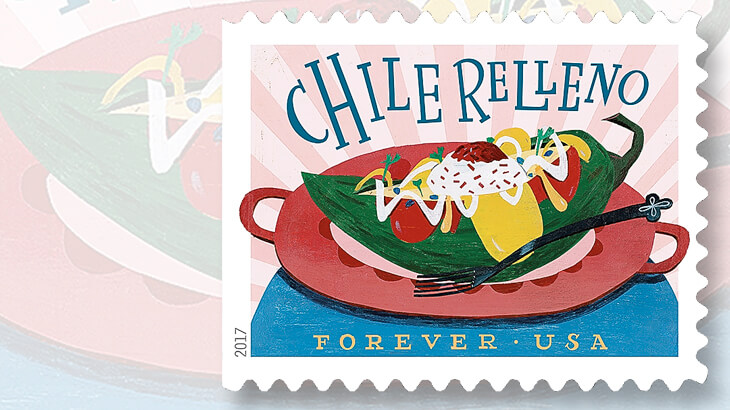 The United States Postal Service will issue six forever stamps April 20 depicting foods of Central and South America, Mexico and the Caribbean. The stamp set, called Delicioso, will be offered in a double-sided pane of 20. 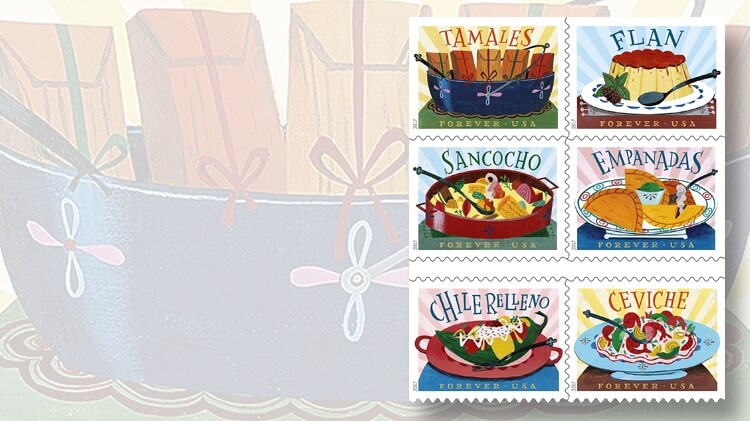 The dishes on the six Delicioso forever stamps that will be issued as a set on April 20 are tamales, flan, sancoho, empanadas, chile relleno, and ceviche. The stamps will be issued in Albuquerque, N.M.
Previous
Next

Six United States stamps celebrating prepared dishes from south of the border and the Caribbean will be issued April 20 in a double-sided pane of 20.

The artwork and stamp design was created by John Parra, an illustrator born and raised in Santa Barbara, Calif., and now based in Queens, N.Y.

“Each illustration was created by applying multiple layers of acrylic paint to textured boards, using sandpaper to reveal the hidden layers and give the designs a worn, vintage look,” the U.S. Postal Service stated in its announcement of the new stamps.

The double-sided pane of 20 Delicioso stamps, which the Postal Service describes as a booklet, will include four stamps with the tamales and flan illustrations, and three stamps each of the other four subjects.

Parra graduated from Art Center College of Design in Pasadena, Calif., and is best known for his illustrated Latino-themed children’s books, according to an online biography at johnparraart.com.

The stamps are offset-printed and processed by Banknote Corporation of America.

The Postal Service will issue an undisclosed quantity of Delicioso stamp press sheets consisting of eight die-cut double-sided panes of 20 (160 stamps) selling for face value at $78.40.

The stamps are being issued in Albuquerque, N.M., according to the Postal Service, but as this issue of Linn’s was heading to press, there had been no announcement regarding a first-day ceremony.

It is not known if the Delicioso stamps will be issued in association with this community event.

Prepared foods are infrequently featured on U.S. stamps, but this new set comes just nine months after the five Soda Fountain Favorites stamps were issued June 30, 2016, featuring appealing treats such as an ice cream sundae, a float, and a banana split (Scott 5093-5097).

The Postal Service said that with the issuance of the new Delicioso forever stamps, it is celebrating the influence of Central and South American, Mexican, and Caribbean foods and flavors on American cuisine.

The six dishes, “from an array of Latin American culinary traditions … have found new life and variations in the United States,” the Postal Service notes.

DiningChicago.com reports that tamales were offered to visitors at the 1893 World Columbian Exposition, but the history of the familiar dish of cheese and seasoned meat, wrapped in a corn masa and traditionally cooked within a corn husk or banana leaf, dates back to ancient Mesoamerican cultures.

Though popular in Latin America, flan is known in many variations throughout the world. The sweet and spongy custard is often prepared with a carmel topping as a tasty dessert.

Sancocho is a filling soup or stew created with meat and vegetables; Caribbean variations include rice and beans added to chicken, sometimes mixed with other meats.

The empanada is a folded dough or bread baked or fried with a meat and cheese filling that can vary from region to region. International variations include the pasty in England, the calzone in Italy, and the pierogi in the American Midwest.

Take a large mild roasted pepper, such as a poblano, Anaheim, or Hatch chile; stuff it with minced meat, onions, and garlic; add cheese if you like. Coat it with an egg and flour batter, bake or fry, top it with a little salsa or sour cream, and you’ll enjoy chile rellenos, a hearty dish for breakfast, lunch, or dinner.

The cold seafood side dish known as ceviche includes fish or shrimp marinated with lime or other citrus, tomatoes, chiles, onions, and spices.

Technical details and first-day cover ordering information for the Delicioso stamps are given below.

Standard ordering instructions apply. Collectors requesting first-day cancels are encouraged to purchase their own stamps and affix them to envelopes. The first-day cover envelopes should be addressed for return (a removable label may be used), and mailed in a larger envelope addressed to FDOI-Delicioso, USPS Stamp Fulfillment Services, Cancellation Services, 8300 NE Underground Drive, Suite 300, Kansas City, MO 64144-9900.

Requests for first-day cancels must be postmarked by June 20.

The Postal Service’s set of six uncacheted first-day covers for the Delicioso stamps is item 672716 at $5.58. USPS item numbers for stamps and FDCs also appear in Linn’s 2017 U.S. Stamp Program.