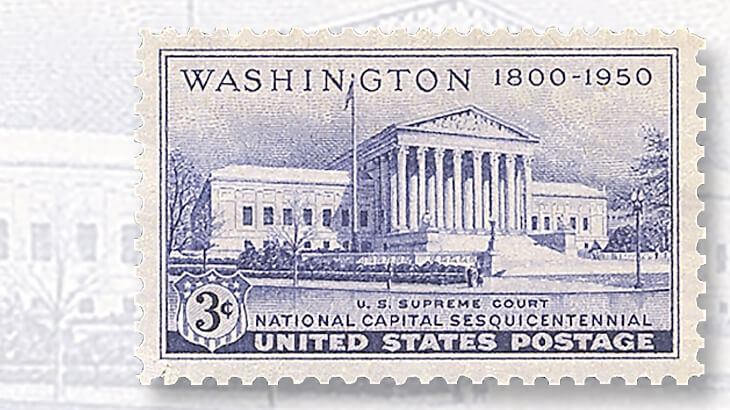 The cartoon caption contest stamp for April is the 1950 3¢ National Capital Sesquicentennial stamp picturing the Supreme Court Building. Put yourself in the robes of a federal judge and tell me what you might be thinking or saying about your work, politic

The three branches of the federal government, as laid out in the United States Constitution, are the executive, legislative, and judicial.

Recent cartoon caption contests have featured stamps that asked Linn’s readers to think as if they were representing the first two branches. It seems only proper to give you a shot at donning the judge’s robes as a representative of the judicial branch.

The stamp for this month’s contest is the 1950 3¢ commemorative showing the U.S. Supreme Court Building, part of the National Capital Sesquicentennial issue marking the 150th anniversary of the establishment of Washington, D.C., as the national capital.

With all that is swirling about the Supreme Court these days, from major cases before the court, to the nomination of a new justice, there is plenty of fodder for you to draw from. Plus, there are many issues concerning lower courts as well.

So, take your gavel in hand and tell me what you might be saying or thinking about the work of the court system, or political issues affecting the courts. Alternatively, you could relate the court system to philately, and come up with a line that highlights that subject.

To be considered for the prizes, entries must reach me no later than April 28.