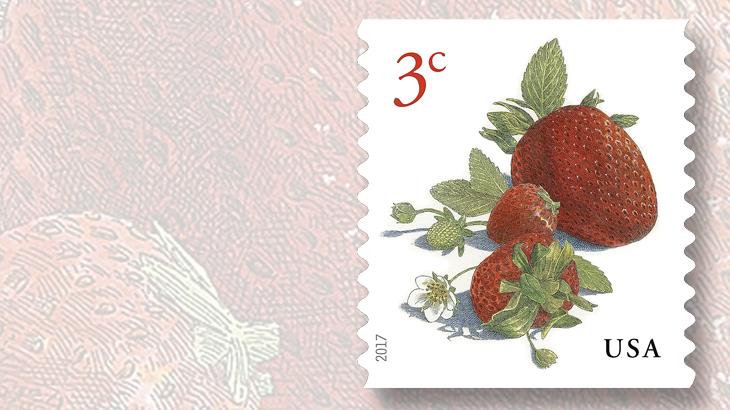 A 3¢ Strawberries coil stamp will be issued May 5 in Afton, Mass., just a few miles from Boxborough. 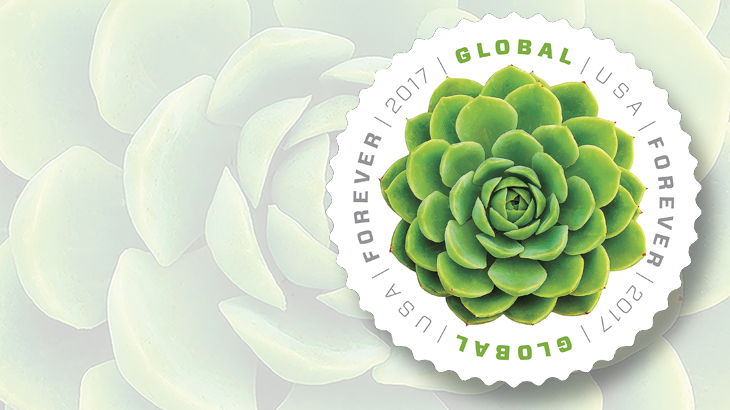 The United States Postal Service has revealed details of two new stamps that it will issue in the coming weeks. The 3¢ Strawberries coil stamp and the nondenominated ($1.15) Succulent global forever stamp were previously unannounced.

The Succulent global forever stamp will be issued in a pane of 10 on April 28. The design shows an overhead view of an echeveria photographed by Erika Kirkpatrick. William J. Gicker was the art director, and Greg Breeding designed the stamp.

The stamp will be issued in San Francisco, Calif. The issue date coincides with the first day of the 2017 Westpex stamp show, taking place April 28-30 at the San Francisco Airport Marriott Waterfront hotel.

The 3¢ Strawberries stamp will be issued in a coil of 10,000 on May 5 in Acton, Mass., which is five miles east of Boxborough, Mass. The annual Philatelic Show sponsored by the Northeastern Federation of Stamp Clubs is taking place May 5-7 at the Boxborough Regency hotel.

Although no first-day ceremony has been announced for either stamp, it is likely that each will be issued in association with the respective stamp show taking place nearby.

The two most recent issues have not yet been assigned Scott catalog numbers.

When to expect the latest Fruit definitive stamp