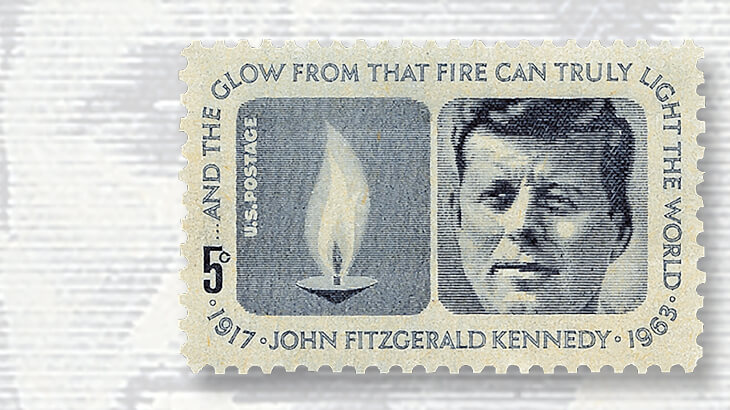 John Fitzgerald Kennedy was born May 29, 1917, in Brookline, Massachusetts. A decorated World War II Navy veteran, Kennedy was elected to the United States House of Representatives from Massachusetts in 1947. He served there until 1953, when he was elected to the U.S. Senate. In 1960, Kennedy defeated Richard M. Nixon to become the 35th president of the United States.

As President, Kennedy pursued a muscular anti-Communist program in foreign policy, opposing Communist aggression in Cuba, Vietnam, and elsewhere. He was assassinated during his second year in office on Nov. 22, 1963, by a Communist named Lee Harvey Oswald. His tragic death brought trauma to the America public, and most people then living who are still alive today can tell you exactly where they were and what they were doing when President Kennedy was killed.

On May 29, 1964, the United States issued a 5¢ John F. Kennedy and Eternal Flame stamp (Scott 1246). This is a common stamp and is valued in mint never-hinged condition at the minimum value of 25¢ in the 2017 Scott Specialized Catalogue of United States Stamps and Covers. However, mint panes of 50 are currently selling in the $7-to-$10 range against a face value of $2.50 and a nominal catalog value of $12.50. If you hold mint panes of 50 in your collection or stock, now is a good time to sell them. Look for the sale price to rise slightly as the anniversary of his birth approaches.