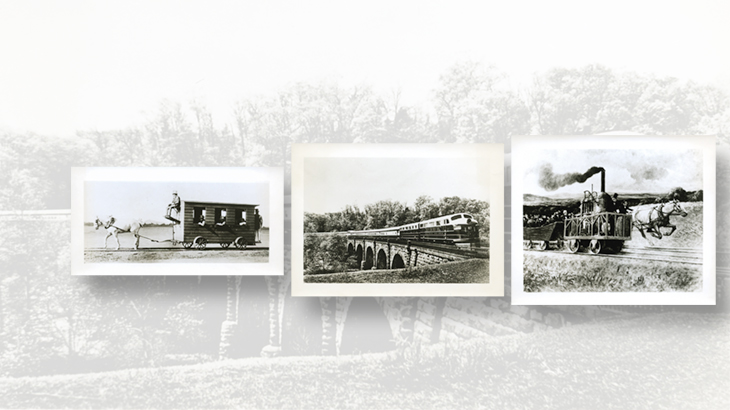 These three photographs were used by the Bureau of Engraving and Printing as models for the trains illustrated on the 1952 Commercial Railroading stamp. 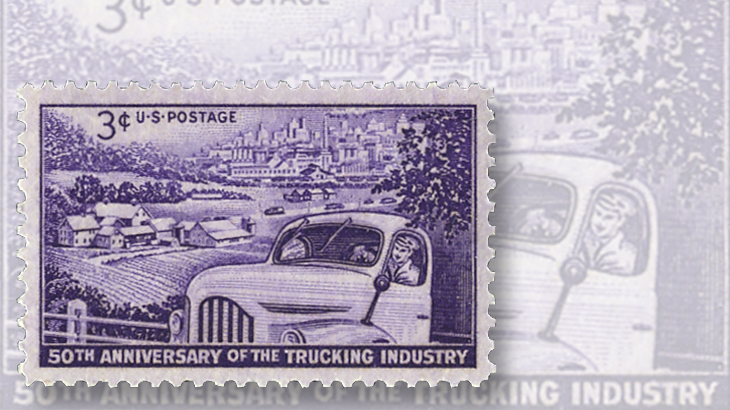 Ultimately, the trucking industry lost the court battle over the Commercial Railroading stamp, but won the war, when it was honored on this companion stamp in 1953. 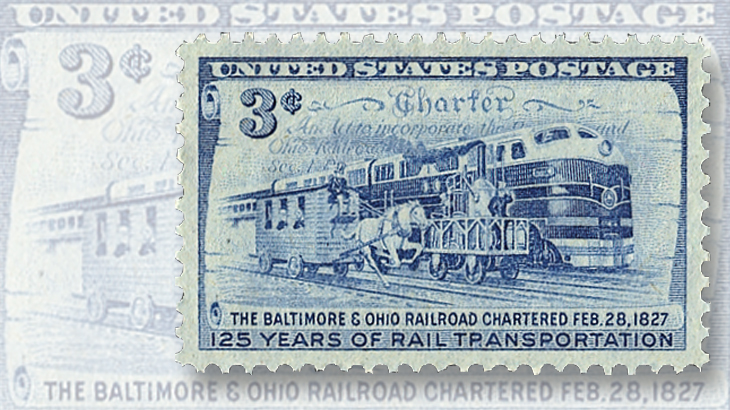 The announcement of this 1952 stamp honoring the 125th anniversary of U.S. commercial railroading generated a surprise lawsuit from the trucking industry, seeking to derail the issuance of the commemorative.
Previous
Next

The announcement of a 1952 3¢ stamp featuring rail transportation (Scott 1006) caused some excitement at the headquarters of the Post Office Department.

While the POD generally was happy to get any free publicity for stamps being issued, this one generated a lawsuit that threatened to derail the first day of this commemorative.

Atlantic Freight Lines Inc., a trucking firm in Uniontown, Pa., filed for an injunction to cancel the planned issuance of the stamp. Atlantic claimed that the stamp would be advertising one of its competitors.

The POD had already distributed 30 million of these stamps to post offices nationwide, with instructions to open the packages and sell the stamps once they had been issued on Feb. 28, 1952.

Just hours before the first-day ceremony, the U.S. District Court for the District of Columbia ruled in favor of the postmaster general, stating, “It is not for the courts to interfere in matters entrusted by Congress to the Post Office Department.”

The POD went ahead with the ceremony, but it took the lawsuit seriously.

You might say that it saw the train coming down the track, and not wanting to be run over, magnanimously decided to issue a 3¢ stamp for the 50th anniversary of the trucking industry. This commemorative (Scott 1025) was issued Oct. 27, 1953.

The Commercial Railroading commemorative might also have been challenged by one or more of the commercial railroad companies because it singles out the Baltimore & Ohio Railroad for honor, because its charter, granted Feb. 28, 1827, marked the formal beginning of rail transportation in the United States.

Not only was this railroad named on the stamp, but the locomotive shown is clearly a B&O train. The B&O logo consisting, in part, of the U.S. Capitol dome, appears at the junction of the dark blue stripes on the front of the locomotive.

The color pattern on the locomotive’s sides also reflects the B&O color scheme: gray on top, with royal blue stripes, bordered with yellow on a lighter blue background. In fact, its most famous passenger train was nicknamed “The Royal Blue.”

Thus, the blue color of the stamp is no accident.

The stamp design features the three stages in the development of rail transport and was modeled from three photographs.

The first is the “Pioneer Car,” the original method used for passenger service. Next is the Tom Thumb, the first steam locomotive placed in service by the B&O.

Finally, dominating the other two, is the modern streamlined diesel locomotive.

My thanks to Linn’s reader John C. Graper of Wilmington, Del., who provided the details of the B&O color scheme.