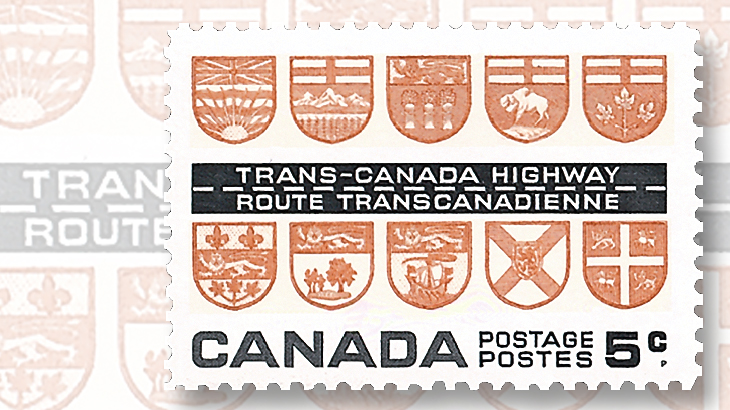 Canada Post issued a 5¢ commemorative stamp in 1962 to mark the official opening of the Trans-Canada Highway. 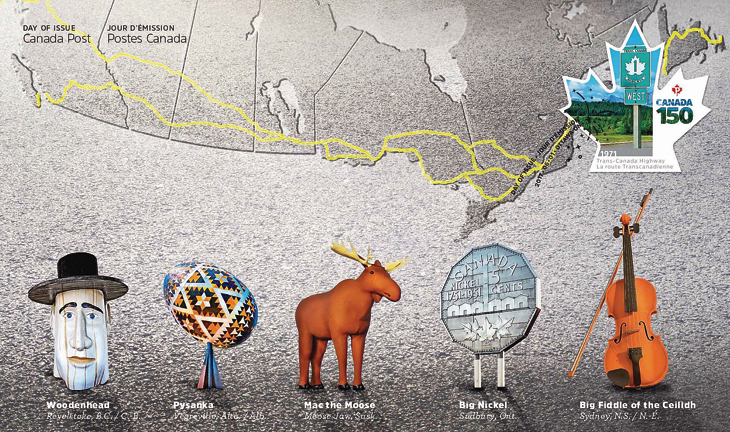 The first-day cover for the Canada 150 Trans-Canada Highway stamp shows a map of the highway and five oversized roadside attractions found along it. 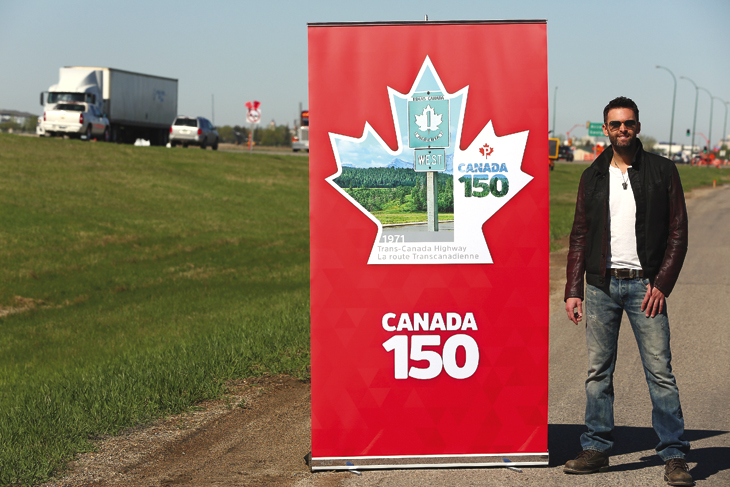 Canada’s country superstar Dean Brody spoke and performed at the May 16 unveiling of the Canada 150 Trans-Canada Highway stamp in Regina, the capital of Saskatchewan. Photo courtesy of Canada Post/Chris Graham. 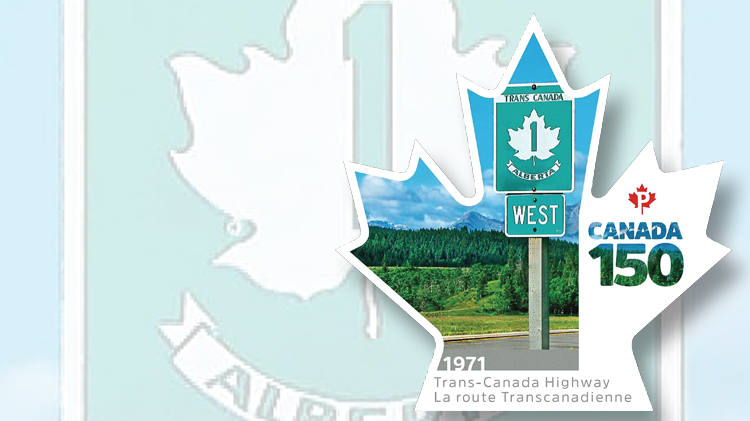 This maple-leaf-shaped stamp commemorates the Trans-Canada Highway, which opened in 1962 but was not finished until 1971. It is the fifth stamp to be unveiled in Canada Post’s series of 10 highlighting events of the past 50 years. June 1 is the issue date
Previous
Next

The stamp commemorates the Trans-Canada Highway, which Canada Post called “the 8,000-kilometre [4,970-mile] ribbon of adventures, dreams and memories — and a key economic artery for Canadian business.”

The stamp was unveiled May 16 in Regina, Saskatchewan, at the home of Brandt Group of Companies, which serves several industries including construction, agriculture, mining, and rail.

The Canada 150 Trans-Canada Highway stamp will be issued June 1, along with the other nine stamps in the set, all recognizing historic events of the past 50 years.

Those already revealed honor Expo 67, the Constitution of 1982, the Shuttle Remote Manipulator System known as Canadarm, and the Civil Marriage Act of 2005.

All of the stamps are shaped like Canada’s maple leaf.

Although the Canada 150 Trans-Canada Highway stamp was unveiled in Saskatchewan, the design depicts a scene of Alberta with a green and white highway sign marked “Trans Canada” “1” “Alberta” and “West” in the foreground, and a forest and the Rocky Mountains in the background.

This is Canada’s second commemorative for the highway; the first was issued Aug. 31, 1962, to mark its official opening. That 5¢ stamp (Scott 400) shows the coats of arms of Canada’s 10 provinces, signifying the highway runs through all of them.

The new stamp marks the completion of the highway in 1971.

Since then, there have been many upgrades and some additional road links added.

The highway holds a special place in the hearts of those who have traveled on it, according to Canada Post.

“It has fed our desire for adventure and fuelled our fascination with the open road, inviting family or buddy road trips for generations of Canadians.”

Canada Post added, “From singers and bands to job-seekers, junior hockey teams and students heading off to college or university, countless Canadians have taken this highway to their dreams.”

At the unveiling ceremony, Brody not only talked about how the highway led him to many stops on his tours, but also how it represented home.

Born in British Columbia in 1975, Brody moved to Nashville in 2004 and returned to Canada about six years later.

Brody said, “I remember coming over the border [from the United States] and driving into New Brunswick, and just the wide open spaces, and miles and miles of beautiful highway and yeah, I was just like ‘Wow I’m home.’ ”

Other speakers at the unveiling ceremony talked about their experiences on the highway, along with its importance to commerce. Gavin Semple, chairman of the Brandt Group of Companies, said that Brandt’s daily existence is “tied closely to this vital, national artery.”

The ceremony was broadcast live on Facebook. While the speakers were talking, cars and trucks traveled up and down the highway in the background.

Links to videos, photos, and stamp and first-day cover art for the stamps that have been unveiled are available here.

Roy White and Liz Wurzinger of Subplot Design Inc. in Vancouver, British Columbia, designed the stamps. They were printed by the Lowe-Martin Group. Each stamp measures 40 millimeters by 40mm.

The stamps will be available in self-adhesive form in 400,000 booklets of 10, and in 80,000 gummed panes of 10 stamps “with circle perforations 4.5 cm in diameter,” according to Canada Post.

A total of 10,000 packs of 10 official FDCs — one for each stamp design and each canceled in Ottawa — also will be made available.

The first-day cover for the Canada 150 Trans-Canada Highway stamp includes a map at the top with the highway outlined in yellow and pictures of five large roadside attractions at the bottom.

One of these, the world’s largest Easter egg (Pysanka) in Vegreville, Alberta, also was featured on two stamps issued in 2009 (Scott 2335d, 2336d) as part of a Roadside Attractions series.

The back of the FDC provides more information about the highway and also shows Rogers Pass Monument Arches in British Columbia. These arches commemorate the opening of the highway.

The sixth stamp in the Canada 150 pane of 10 will be unveiled Thursday, May 25, in St. John’s, Newfoundland. The last unveiling will be on the June 1 issue date.