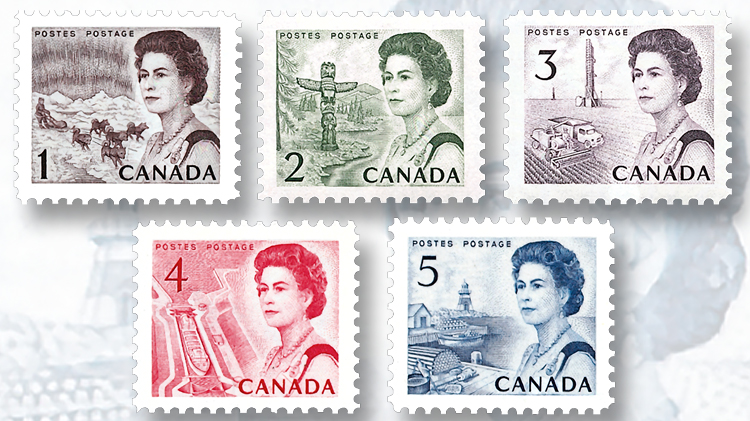 Issued Feb. 8, 1967, the first low denominations of Canada’s Centennial definitive series combined the monarch as depicted on Canadian stamps since 1851 with vignettes showing regional scenes from the second-largest nation on Earth.

Spotlight on Philately — By Fred Baumann

They were born half a century ago in Canada, postally marking the first 100 years of that nation, a century that saw it grow from a coalition of British colonies on the Atlantic and Great Lakes to stretch west to the Pacific and north to the vast Arctic wilds. Unlike that country, now the second largest on Earth, the low-denomination Centennial definitives were small.

The stamps also appeared conventional and unassuming, yet many collectors grew surprisingly fond of them, and remain so to this day.

Brief paragraphs seemingly tucked in as an afterthought on page 9 of D. Robin Harris’ monumental 436-page Centennial Definitive Series 1967-1973 ask and answer the question: “Why are the Centennial definitives so popular?

“Ask a dozen people and you will probably get a dozen different answers. Perhaps it is the number of perforation varieties (not seen before in a Canadian definitive series); or the different tagging (untagged, Winnipeg tagged [three types] and the introduction of Ottawa/General tagging); or the enjoyment of using an ultraviolet light to ‘lamp’ every Centennial stamp that was seen; or the number of unannounced varieties that were being spotted by collectors throughout the country.

To this short list, I would add another highly collectible aspect: A remarkable range of postal services, many in their final days, were paid for with Centennial definitives, making the postal history of these stamps fascinating, as well. Indeed, fresh finds still surface regularly.

In March at the Richpex stamp show in Burnaby, British Columbia, Ron Leith Auctions offered a pair of 5¢ Centennials on a 1967 postal form paying Canada’s now-defunct 10¢ postage due fee for the return of a hotel key to the Slumber Lodge at Smithers, B.C., dated May 5, 1969. (At that time, hotel keys with an address tag could be dropped by forgetful patrons in a mailbox anywhere in Canada to be returned, and innkeepers were happy to pay a mere dime for the service.)

Offered with an estimate of $75 Canadian, the cover that carried the key was hammered down for $160.

If you’re interested, you can enjoy other intriguing and collectible usages at the “Revamped Centennials” pages of the Postal History Corner for Canadian stamps.

Shown above are the 1¢ to 5¢ Centennial low denominations (Scott 454-58), issued Feb. 8, 1967. Although they are the same general size as Canadian stamps back to 1851, they are formatted in what photocopiers have taught us to think of as a “landscape” rather than a “portrait” format, as had been Canada’s stylized Elizabeth II Cameo definitives of 1962-63 (Scott 401-405).

All Canadian definitives from Victoria to King George VI were straightforward portraits of British monarchs of Canada. These 1967 stamps, printed in one color, were the first Canadian definitives to combine a monarch with regional scenes from Canada emphasizing the connection between queen and subject.

The portrait of Elizabeth II on these stamps is attributed to British portrait photographer Anthony Buckley, although it looks to me slightly more like several that came from the camera of Dorothy Wilding, another famous portraitist with whom Buckley worked in the early 1960s and whose art also was used in influential definitive designs.

The same portrait of the queen was used on the 5¢ Royal Centennial Visit commemorative issued in 1967 (Scott 471).

The 1¢ brown Centennial definitive shows an Arctic native steering a dogsled under the northern lights, while the 2¢ green shows a Pacific coastal scene with a detailed totem pole.

The 3¢ dull purple pictures the riches of the Prairies: Alberta’s oil derricks and wheat from Saskatchewan and Manitoba.

Illustrated on the 4¢ carmine rose is one of the locks of the St. Lawrence Seaway, linking Lake Superior with the Atlantic Ocean, while the 5¢ blue depicts a navigational light and the lobster pots of a fishing port in Canada’s Maritime provinces of the East Coast. These perforated 12 by 12 stamps were printed by Canadian Bank Note Co.

Accompanying the low-denomination Centennial definitives were higher denominations in a series of horizontal commemorative-format stamps. Monochrome like the lower denominations, the 8¢, 10¢, 15¢, 20¢, 25¢, 50¢, and $1 stamps depict Canadian works of art. They, too, are avidly collected, and well worth a look at another time.

Want to read more about these Canadian Centennial definitives?

There are several ways to learn about and collect Canada's Centennial definitives. In our June 19 issue, Fred Baumann takes an in-depth look at the series — breaking down the stamps, postal stationery, and postal history. To learn more about this historic Canadian series, subscribe to Linn's today! Print and digital editions are available.