Choose your sport on new Have a Ball! round forever stamps to be issued at U.S. Open 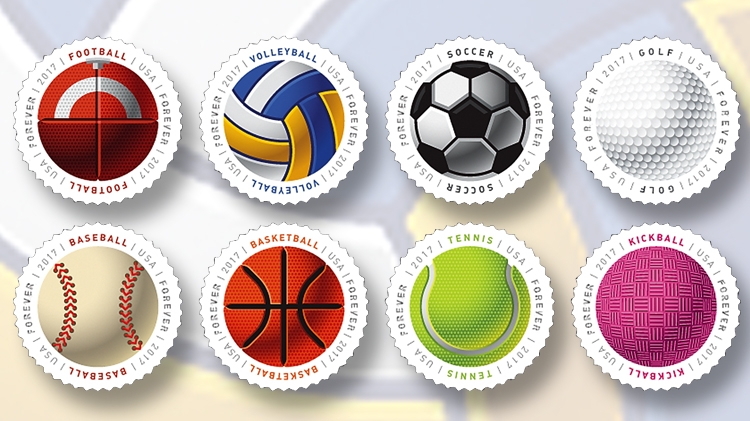 A new set of eight round United States stamps will be issued June 14, with each stamp depicting a different sports ball. The nondenominated (49¢) forever stamps are valid for domestic letter mail. 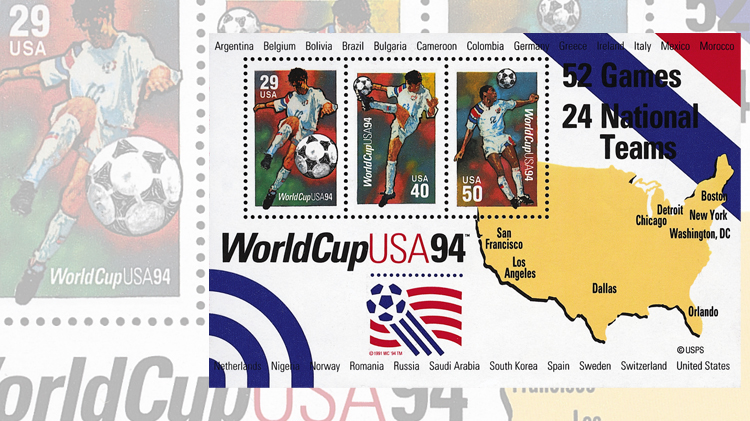 A soccer ball was featured with a soccer player on three different stamps issued May 26, 1994, to commemorate the World Cup championship games held that year in the United States. 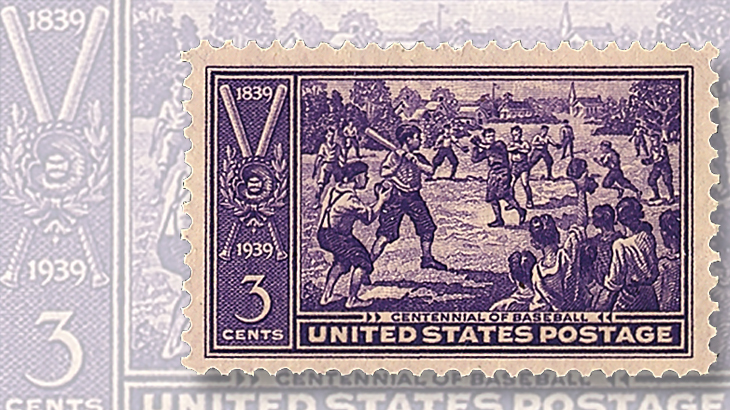 An early example of a sports ball on a stamp is the baseball in front of the crossed bats on the left side of the design of this 1939 issue.
Previous
Next

The United States Postal Service will issue eight round nondenominated (49¢) forever stamps June 14, in a set that it is calling “Have a Ball!”

The stamps are being issued in Hartford, Wis., about six miles north of the Erin Hills golf course in Wisconsin’s Kettle Moraine region, where the 117th U.S. Open Championship is taking place June 12-18.

The Postal Service has provided the following information about the first-day ceremony:

“The first-day-of-issuance ceremony will be held at 8 a.m. CDT, Wed., June 14, at the 117th U.S. Open Championship in Hartford, WI. The ceremony will be part of the U.S. Golf Association’s Flag Day celebration. … To attend the standing room only ceremony, you must present a 2017 U.S. Open ticket for June 14, 2017, or a free special access ticket available for request only at usps.com/haveaball. Special access tickets are limited and are only good for June 14, 2017. Confirmed acceptance will be provided and is required for admission. The offer does not apply to U.S. Open ticket holders, active military — who will be admitted free — or children under 12 when accompanied by an adult ticket holder or badge holder.”

According to the Postal Service, “The round Have a Ball! stamps feature a special coating applied to selected areas of the stamps during the printing process to give them a textured feel.”

The stamps are printed in panes of 16 by Ashton Potter USA Ltd., utilizing an unusual combination of offset lithography and flexography. Flexographic printing, which employs a flexible relief plate in a rotary printing process, has been used previously by the Postal Service, most commonly to imprint stamps in color on its stamped envelopes.

Along with the post office panes, the Postal Service is making available an undisclosed quantity of die-cut press sheets consisting of eight unsevered panes (128 stamps) and selling for face value at $62.72.

Although the Postal Service suggested in 2013 that the round shape of its global forever stamps would distinguish them from the domestic-rate forever stamps, these new round Have a Ball! stamps are simply marked “Forever,” and are valid for the lower-priced domestic 1-ounce letter service, not the international first-class service.

The new stamps are slightly smaller in size than the Postal Service’s global forever stamps, such as the nondenominated ($1.15) Green Succulent stamp issued April 28 in panes of 10.

The theme of sports on stamps is popular throughout the world, and has appeared with regularity on U.S. stamps for many years.

Most of the sports balls featured in the new set have appeared on U.S. stamps of one sort or another.

Three stamps showing soccer players, each with a soccer ball, were issued May 26, 1994, in advance of the World Cup championship games held that year in the United States (Scott 2834-2837).

One of the earliest sports stamps in U.S. history is the 3¢ violet Baseball Centennial of June 12, 1939 (Scott 855), which clearly shows a baseball in front of the crossed bats on the left side of the stamp.

A tennis ball is featured most recently on a nondenominated (46¢) stamp for tennis star Althea Gibson (Scott 4803).

The textured pink rubber kickball, a fixture on playgrounds for generations, also is used by adults participating in social and competitive games. The game of kickball developed in the United States about 100 years ago and is structured much like baseball.

The new Kickball stamp in the set appears to be the first appearance of a kickball on a U.S. stamp.

Technical details and first-day cancel ordering information for the Have a Ball! stamps can be found in the box on this page.