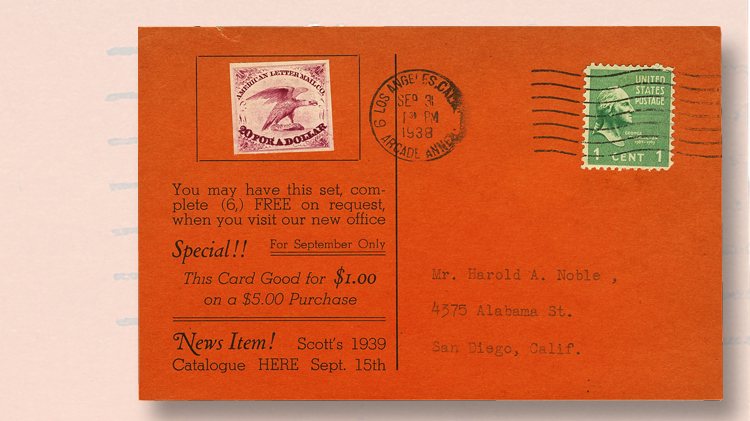 The opening of a new stamp store in Los Angeles prompted dealer W.C. Henry to use American Letter Mail local stamp reprints as a premium to encourage collectors to visit. Each visitor received a set of six of the reprints. 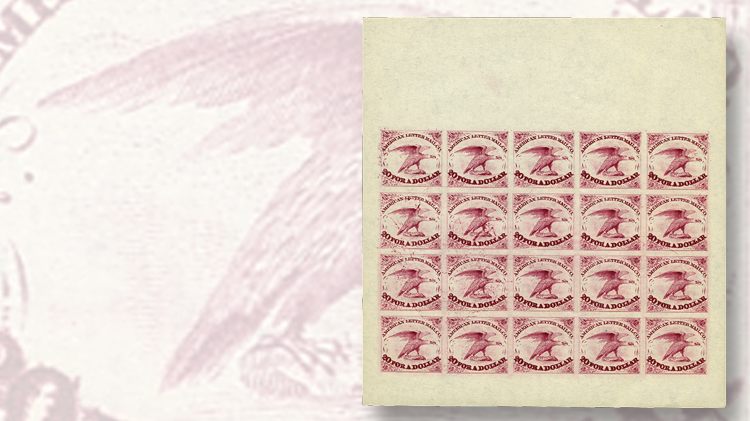 The reprints of the black American Letter Mail local stamp of 1844 were prepared in six colors in sheets of 20 like the original. They can be distinguished from the original by the colors, and by the word “proof” on the back of each one. 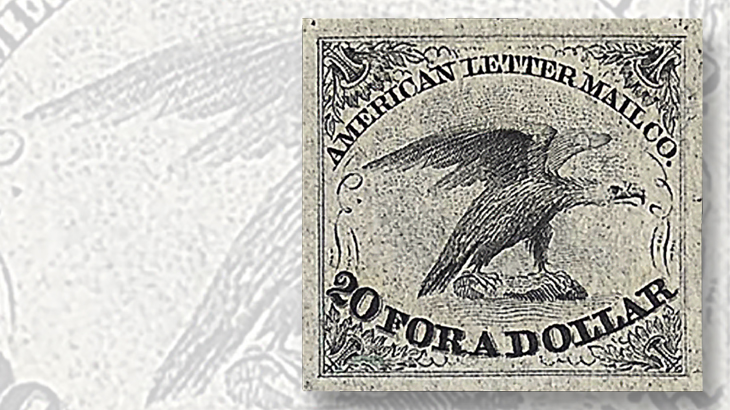 I’ve seen the colorful “20 for a dollar” American Letter Mail Company (ALM Co.) labels picturing an eagle for years, and figured there must be a story behind them.

But until I found a relevant 1938 advertising postcard from an early 20th-century stamp dealer, I wasn’t moved to pursue the story.

Canceled in September 1938 in Los Angeles, the card is franked with the 1¢ green George Washington stamp of the Presidential series.

The American Letter Mail Co. label is affixed in the upper-left corner. The message below it reads, “You may have this set, complete (6,) FREE on request, when you visit our new office.”

The message on the other side of the card includes the new location for “W.C. Henry, Philatelist” at the corner of Sixth and Broadway in Los Angeles.

Shortly after I came across the postcard, I found a set of the 20-subject panes in six colors: blue, carmine lake, red, green, brown, and orange. There is no printing in the margins, the panes have no gum, and each stamp is marked “proof” on its reverse.

So why were these labels made, and what purpose did they serve?

The American Letter Mail Co. was founded in 1844 by Lysander Spooner (1808-87), whose epitaph lists him as a lawyer, abolitionist, entrepreneur, legal theorist, and scholar.

Spooner started the company to compete with the legal monopoly of the United States Post Office, delivering mail at lower prices in a few cities in the eastern United States.

The company was successful delivering mail at lower rates than the post office, but the federal government’s repeated legal challenges eventually forced Spooner out of business.

A local stamp for the American Letter Mail Co. was issued in 1844 in sheets of 20. It is listed in the Scott Specialized Catalogue of United States Stamps and Covers as No. 5L1. A note below the listing reads in part, “No. 5L1 has been extensively reprinted in several colors … ”

There is no indication when the reprints were done, but the card from W.C. Henry was sent in 1938. I don’t know if Henry created these, or perhaps he bought a stock of them from someone else.

So, I am still curious about their origin: Who created them? When? Where? How many were produced?

If you know more about the story of these reprints, I would appreciate it if you would get in touch with me, John Hotchner, at jmhstamp@verizon.net, or by mail at Box 1125, Falls Church, VA 22041-0125.