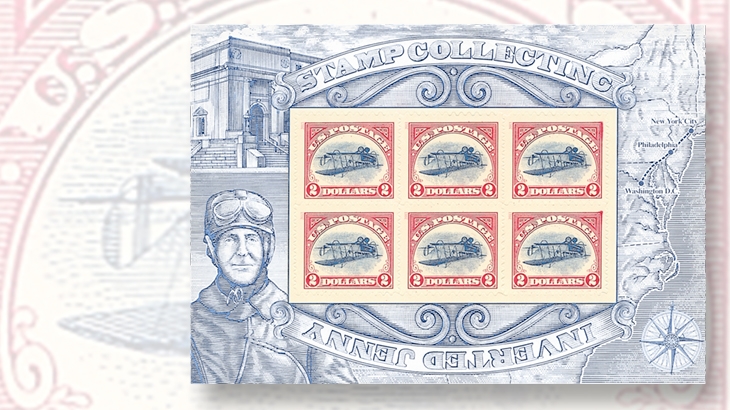 A May 25 report by the United States Postal Service that the 2013 $2 Jenny Invert stamp will be withdrawn from sale at USPS outlets on June 30 is incorrect.

A May 25 United States Postal Service announcement that the 2013 $2 Jenny Invert pane of six stamps was scheduled to be withdrawn from sale was quickly retracted by USPS officials.

According to a notice published in the May 25 Postal Bulletin, the $2 Jenny Invert pane (Scott 4806) was one of 10 stamp items to be withdrawn from sale after the close of the business day June 30.

However, the announcement regarding the $2 Jenny Invert stamp was apparently made in error.

“The $2 Inverted Jenny stamps will remain on sale until sold out,” USPS spokesman Mark Saunders said in response to questions from Linn’s Stamp News. Saunders added that a correction to the notice will appear in an upcoming edition of Postal Bulletin, a fortnightly publication by the USPS that provides instructions and rule changes for its employees.

The Postal Service issued the pane of six $2 stamps Sept. 22, 2013, with every pane packaged in a printed envelope so the contents cannot be seen. Shortly thereafter, the Postal Service revealed that it had also produced 100 panes that show the airplane in the center flying right side up (rather than the upside-down plane depicted on the regular issue) and mixed them in with the panes being sold in post offices and through USPS Stamp Fulfillment Services.

The upright Jenny Invert panes became instant collector items, and are currently valued in the Scott Specialized Catalogue of United States Stamps and Covers at $75,000.

Linn’s Stamp News reported Nov. 1, 2016, that the $2 stamp had been taken off sale at USPS Stamp Fulfillment Services because of declining inventory, but was still available from many U.S. post offices.

At that time, just 30 of the 100 upright Jenny Invert panes had been reported to the Postal Service, but it is possible that others were found but never reported by the finders.

The federal duck stamp is manufactured and sold by the U.S. Fish and Wildlife Service and offered through post offices as a convenience to customers.