Layout, not ‘distortion,’ likely cause of poor Classics Forever centering 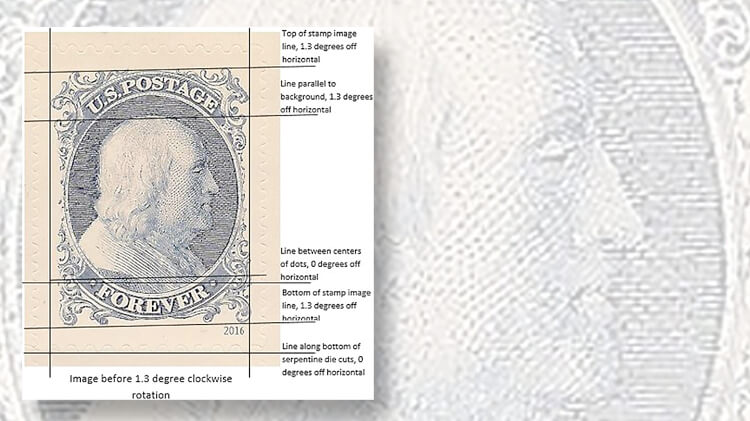 Horizontal and vertical lines superimposed on this 1¢ 1851 Classics Forever stamp, cropped from a pane of six, highlight a subtle 1.3-degree, counterclockwise rotation of the design from the vertical, in relation to the die cuts. Image courtesy of Brock T 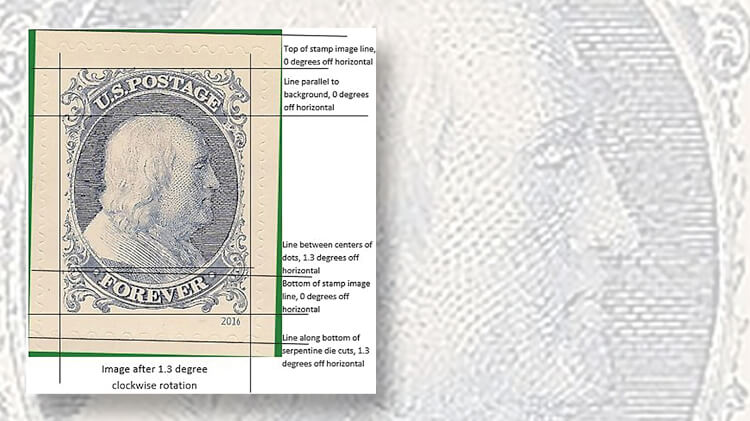 When the second illustration is digitally rotated 1.3 degrees clockwise, the mismatch between the design, now perfectly vertical, and the die cuts becomes apparent. The green background makes the rotation easier to see. Image courtesy of Brock Thoman. 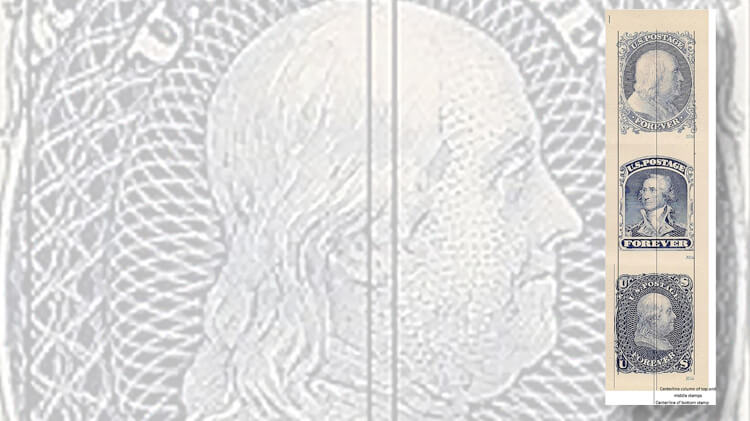 The vertical lines superimposed on this cropped image of the three blue stamps in the right column of a Classics Forever pane show that the three designs are not on the same centerline. The bottom stamp’s centerline is shifted slightly to the left. Image
Previous
Next

Linn’s March 20 report on the poor centering of United States Classics Forever stamps provided an explanation from the U.S. Postal Service, which said paper “distortion” caused by extremely high pressures during printing was the culprit.

It turns out, however, a much simpler reason, hiding in plain sight on every Classics Forever pane of six (Scott 5079), is likely behind the sub-standard centering of these stamps.

Brock Thoman of California contacted Linn’s via email shortly after reading the story (published in the April 3 Linn’s).

His careful study of the Classics Forever panes in his possession revealed some intriguing observations about how the stamps are laid out in the design of pane.

“While the two top stamps (Scott 5079b and 5079d) seem to share the same centerline, the bottom stamp (5079f), which is the widest of the three, is shifted to the left of center by what I measure to be one-half millimeter.”

The differences in the centerlines of Scott 5079b and 5079d, and 5079f, respectively, are evident in the first illustration, which Thoman created using Photoshop.

Vertical lines added by Thoman show the offset of the centerline of the 5079f design in relation to the 5079b and 5079d designs.

The upshot of this quirk in the design layout is that regardless of the placement of the die cuts, it is impossible for all three blue stamps to have perfect centering between the vertical die cuts.

Thoman explains: “This means that even if the two top stamps were perfectly centered between the vertical serpentine die cuts, the bottom stamp would be off center and vice versa.”

This means that each stamp in a given pane is more likely to show better centering in relation to the horizontal die cuts, in comparison to the centering between the vertical die cuts.

During the course of his examination, Thoman also noticed something rather odd about the 1¢ 1851 Classics Forever stamp at top right: the design appears to be rotated counter-clockwise by 1.3 degrees from a true vertical position in relation to the die cuts.

Shown are two illustrations Thoman created using Photoshop. Above is a close-up of a 1¢ 1851 Classics Forever stamp cropped from a pane of six, before being rotated clockwise 1.3 degrees.

Below is a close-up showing the same stamp after the 1.3-degree rotation. The green background makes the clockwise shift easier to see.

Thoman superimposed horizontal and vertical lines on each photo to make the before and after differences stand out. The comments at the bottom and right of each image are Thoman’s.

Once you know what to look for, the subtle rotation of the 1¢ 1851 design can be seen, particularly if you view a pane on edge, slightly below parallel from your field of vision, and sight directly down the bottom of the designs of the top two stamps.

Despite these unusual findings, the Classics Forever stamps are fitting tributes to their handsome 19th-century forebears.