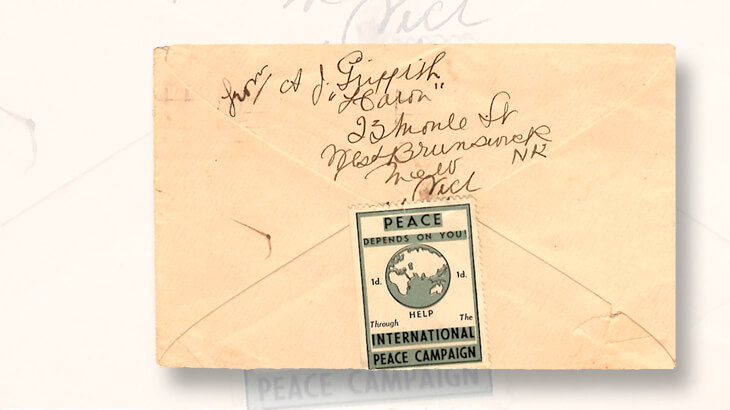 Adding interest to the 1939 censored cover from Melbourne, Australia, is the label affixed on the back from the International Peace Campaign, a short-lived British organization. The label’s message is “Peace Depends on You!” 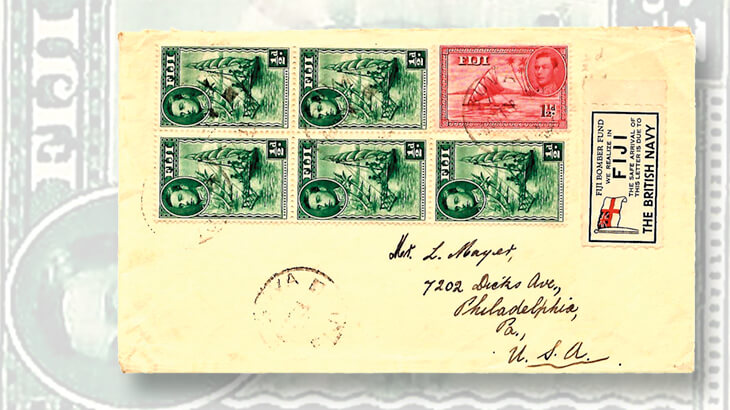 The Fiji Bomber Fund label on this World War II-era cover from Suva celebrates the fundraising effort that bought three bombers for England. 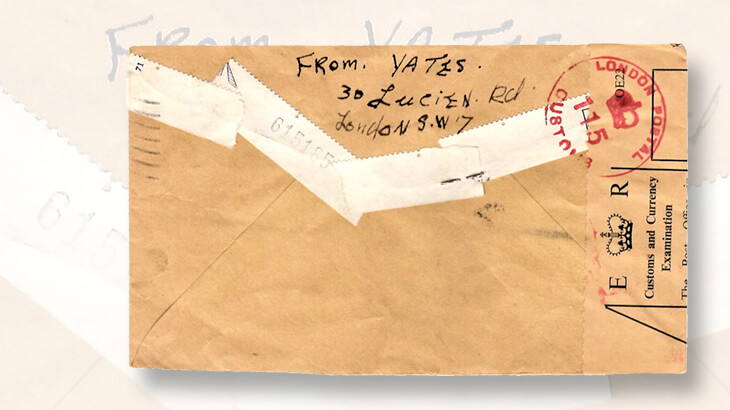 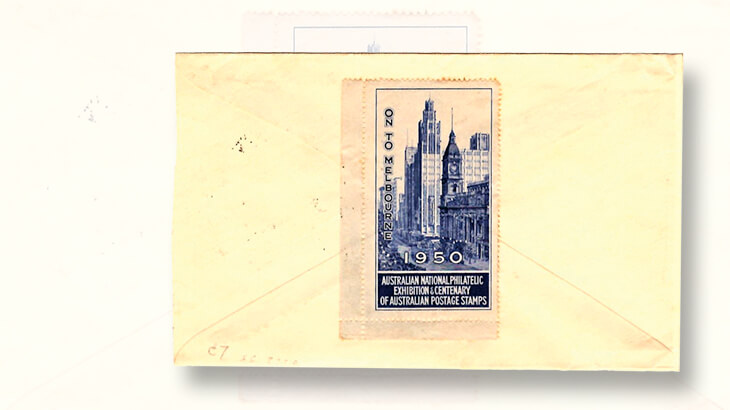 The back of the 1950 Sydney-to-Miami cover displays an oversized label advertising the “Australian National Philatelic Exhibition & Centenary of Australian Postage Stamps” in Melbourne. 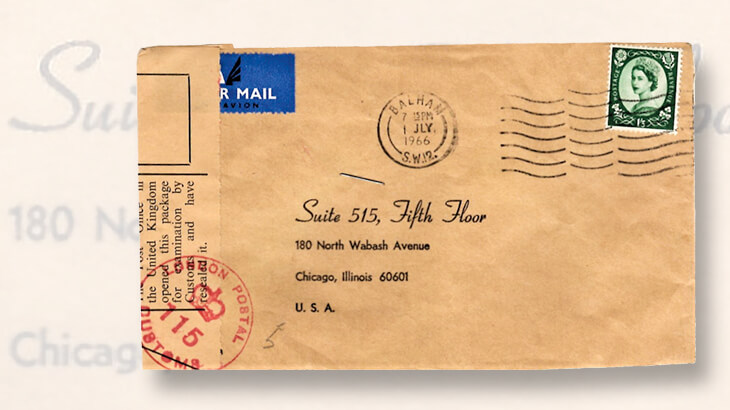 This 1966 cover from Great Britain to a secretive Chicago mail-order company was opened and examined by the customs office in London. 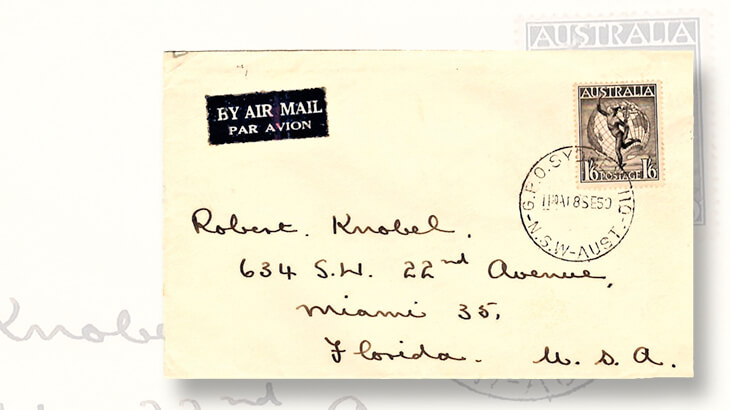 An airmail cover mailed from Sydney, Australia, to Miami, Fla., looks fairly ordinary from the front. The large circular postmark is dated Sept. 8, 1950. 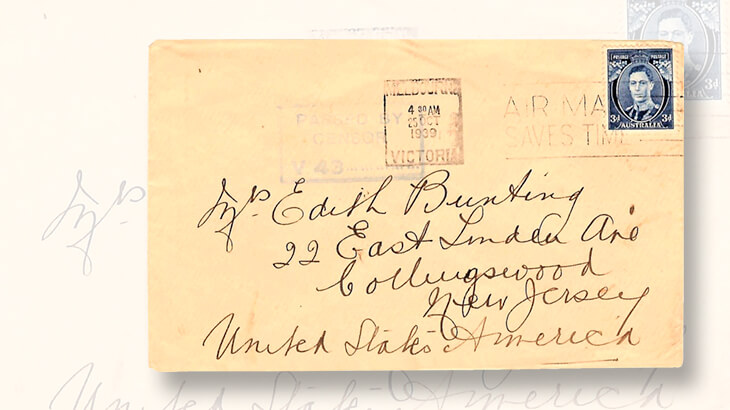 This Oct. 25, 1939, cover mailed to New Jersey from Melbourne, Australia, bears a pale blue censor marking under the postmark. The cover is franked with a blue Australia King George VI stamp.
Previous
Next

Many philatelists collect stamps exclusively. Others are only interested in covers, which are envelopes, postal stationery, or similar items that have been postmarked or traveled through the mail.

And there are those of us who collect both.

I recently spent some time going through a big box of covers that had been stashed away for quite some time. It was as much fun as pawing through dealers’ covers at a stamp show, which is precisely where the covers came from.

This time, I looked a little harder at each of these potential hidden treasures, and stumbled across some that had an extra “something” about them.

One cover was mailed to the United States using an Australia 3-penny King George VI stamp. The postmark was dated Oct. 25, 1939, and indicated the cover was sent from Melbourne, Australia. Sort of hiding behind the postmark is a very pale blue handstamp that reads “PASSED BY/CENSOR/V.43.”

If you ask most Americans when World War II began, the answer would probably be Dec. 7, 1941, when Japan bombed Pearl Harbor, Hawaii. If you ask Asians when World War II began, you are liable to hear July 29, 1937, when Japanese forces occupied Peking (now Beijing), China. Or, if you are talking to Europeans, the date they might say is Sept. 1, 1939, when Germany invaded Poland.

Well, here is a letter sent from Melbourne on Oct. 25, 1939, just 52 days after Great Britain, Australia, and New Zealand declared war on Germany on Sept. 3, 1939. That is why the mail was censored.

But the surprise is on the reverse of the cover: a label calling for peace — “Peace Depends on You!” — originating from the International Peace Campaign, an organization founded early in 1936 by Dame Adelaide Livingstone in Great Britain. The group had difficulties once the war broke out and ceased in 1941.

Another cover I found in my stash was sent from Suva, Fiji, to Philadelphia. The “extra” this time is a “Fiji Bomber Fund” label. This effort raised enough money to buy three bombers for Great Britain’s Royal Air Force, an amazing accomplishment from a small island.

The Fiji stamps affixed are from 1938 and 1940 issues, but unfortunately the postmarks on them are unclear and the mailing date is unknown. (Online auction listings for covers with Fiji Bomber Fund labels and legible postmarks seem to be mostly from 1941.)

Another cover I unearthed is kind of strange. It has an airmail etiquette (sticker) in the upper left corner, but there is another label covering the left half of the etiquette and folded over onto the back of the cover.

The cover was sent July 1, 1966, from the Balham neighborhood, S.W. 12, of London, England. There is a round “London Postal Customs” handstamp in red on the bottom-left corner of the front and again on the back flap of the cover.

The “Customs and Currency Examination” sticker indicates the envelope was opened for inspection. That is an interesting label, but what turned out to be even more interesting was the printed address of “Suite 515, Fifth Floor, 180 North Wabash Avenue, Chicago, Illinois.”

A chat about this address took place among participants on www.stampboards.com late in 2014, revealing that covers exist from all over the world to this address, which was a mail-order company founded by L.W. de Laurence, an author, publisher, and supplier of information and items on magical and occult subjects.

De Laurence died in 1936 but his company continued, and the product line at the time the letter was sent, in 1966, included voodoo items, shrunken heads, supernatural and occult products, talismans, and all sorts of sorcery. It’s interesting but rather spooky.

In a cheerier vein, another cover I found is an attractive Australian airmail piece postmarked in Sydney Sept. 8, 1950. A large and lovely engraved label on the reverse shows some of Melbourne’s downtown area and also advertises the Australian National Philatelic Exhibition, held in Melbourne Town Hall, Oct. 4-14, 1950.

The label has a view of Collins Street, where many stamp shops were located and, indeed, some still are.

The object of this particular column is to encourage collectors to spend some time looking carefully for interesting things that otherwise can be missed on covers. Both stamps and covers contain history you can hold in your hands. Don’t overlook it.