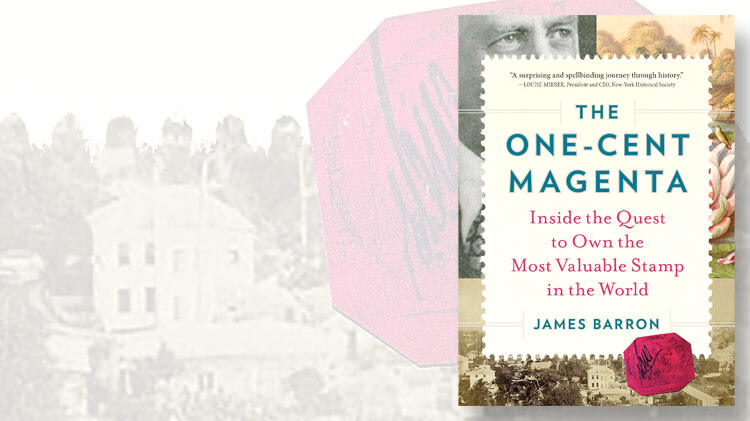 New York Times reporter James Barron’s new book about the British Guiana 1856 1¢ Magenta provides delightful vignettes of the colorful characters who have owned the world’s most expensive stamp. The One-Cent Magenta Inside the Quest to Own the Most Valuab

When I was a youngster in the mid-1970s, I was fascinated with superlatives, and the Guinness Book of World Records was my bible.

Tucked somewhere among the pages of my well-worn copy was the record for the world’s most valuable stamp.

I don’t recall if I ever consulted an atlas to find British Guiana on a map. But I vividly remember the stamp’s value, as cited in the Guinness Book: $286,000. And the stamp was described as unique, one of a kind.

Now I’ve learned over the years that “unique” is a word tossed around with surprising imprecision.

In the case of that mysterious stamp, however, the adjective fits like a glove — there is only one. It is, in fact, unique.

And that fact persuaded a very wealthy man who designs shoes to go after what stamp collectors the world over know as the British Guiana 1856 1¢ Magenta.

On June 17, 2014, at the Sotheby’s auction house in New York City, Stuart Weitzman, bidding anonymously, paid a record $9.48 million for the rarest stamp in the world.

Also in attendance that evening was James Barron, a 40-year veteran reporter for The New York Times who, as it turned out, was embarking on writing a book about the 1¢ Magenta.

That book, The One-Cent Magenta Inside the Quest to Own the Most Valuable Stamp in the World, was published earlier this year, on March 7.

Had it not been for a chance encounter, however, Barron’s rollicking history of the stamp might never have come to fruition.

As Barron wryly puts it in the first sentence of the opening chapter of his book, “My descent into Stamp World started at a cocktail party that had nothing to do with stamps.”

At that soiree, Barron bumped into David Redden, vice president and an auctioneer for Sotheby’s. Barron, his reporter’s instincts in high gear, was angling for a possible story, and he knew Redden might have a nugget for him.

Redden informed him that he was “about to sell an old postage stamp.” Thus began Barron’s quest to learn all he could about the 1¢ Magenta.

Before the stamp hit the auction block at Sotheby’s, it had to go through a rigorous authentication process, which included visits to the Royal Philatelic Society London and the National Postal Museum.

At the NPM, Barron and Redden carefully watched Thomas Lera, an expert in scientific analysis, put the stamp through a series of noninvasive tests that verified its genuineness.

Barron’s recounting of the NPM visit and highlights of the stamp’s history, headlined “The ‘Mona Lisa’ of Stamps to Be Auctioned at Sotheby’s,” appeared in the May 2 issue of the Times.

That story, Barron told me, “got the attention of Algonquin Books,” which decided a book about the stamp was worth pursuing.

Barron got the green light, and before too long he was immersed in what he affectionately calls “Stamp World.”

He sought to recount the fascinating history behind the stamp in a way that would appeal to seasoned philatelists and non-collectors alike.

When he attended the Sotheby’s sale in June 2014, stereotypes he’d heard about “nerdy, closeted collectors” were dispelled. “That was not my notion from what I saw at the sale,” he said.

Rather, he observed people who were part of a “pleasantly cloistered, detail oriented world.”

And that world — Stamp World, as Barron calls it — comes to life in vivid, entertaining ways throughout his book.

In a talk presented March 25 at the Garfield-Perry March Party show in Cleveland, Barron recounted some of the flamboyant characters associated with the 1¢ Magenta whom he profiles with a nuanced balance of humor and reverence.

Among these philatelic luminaries is Arthur Hind, an industrialist from Utica, N.Y., who shelled out $32,500 for the stamp in 1922.

Although he had other great rarities in his collection, Barron writes that Hind considered the 1¢ Magenta “his most important purchase, for it was the one that brought him what he cherished most: fame.”

Forty-eight years later, Irwin Weinberg added to the stamp’s fame when he and eight investors teamed up in a limited partnership and purchased it for $286,000 at Robert A. Siegel’s Rarities of the World sale in 1970.

For the next 10 years, Weinberg raised the publicity of the stamp to dizzying heights, marketing the hobby’s rarest artifact with “hoopla and hype.”

From philatelic exhibitions around the world to an appearance on To Tell the Truth, Weinberg was the stamp’s greatest promoter.

In Weinberg’s formulation, which Barron quotes, “I was trying to introduce it to the world, and maybe find a buyer.”

A first-rate collector, du Pont bid under the pseudonym Rae Maeder, a clever anagram of Demerara, the locale in British Guiana where the stamp had been printed and postmarked.

Of particular interest to this reviewer is Barron’s recounting of du Pont’s close, decades-long friendship with Robert Odenweller, whom I’ve known since my early days with Linn’s and count as a philatelic colleague and friend.

As Barron puts it, du Pont, according to a recollection from du Pont’s mother, viewed the now-retired airline pilot and accomplished philatelist as the brother he never had.

When du Pont was in prison for the 1996 murder of Olympic gold medal-winning wrestler Dave Schultz, Odenweller paid him visits and “delivered news from Stamp World.”

John du Pont died in prison in 2010. Four years later, his most famous possession came to Stuart Weitzman, a luminary on the turbo-charged stage of fashion design who, Barron writes, “was once a boy in Queens with a couple of stamp albums — and stared at the empty space for the one-cent magenta.”

Although Weitzman fell away from the hobby as a teenager, he never forgot about the world’s rarest stamp. And he resolved that one day he would own it.

With that mission accomplished in June 2014, Weitzman agreed to put the stamp on display at the National Postal Museum.

Near the end of his tome, Barron observes that Weitzman doesn’t consider himself “a stamp collector but a collector of one-of-a-kind objects.”

Some in the philatelic fraternity might be tempted to dismiss Weitzman because of this outlook, but I’d wager that the previous owners of the 1¢ Magenta also were magnetically drawn to it because it is unique.

In a very real sense, the 1¢ Magenta has transcended its philatelic nature to become a globally famous object of allure and desire.

Thankfully, Barron’s The One-Cent Magenta is not unique. Copies are readily available at bookstores and through online retailers such as Amazon.

Once you’ve read it, pass it along to a collector friend. Better still, give it to someone outside Stamp World — they just might want to join in the fun and excitement of collecting stamps.