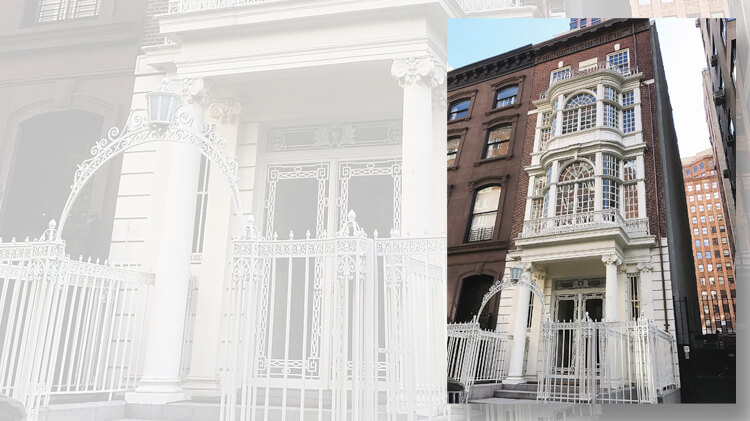 The Collectors Club and the Philatelic Foundation will coexist under a single roof in the Collectors Club’s town house at 22 E. 35th St. in Manhattan beginning Dec. 1. Photo by Matthew Healey.

The Philatelic Foundation is returning home to the Collectors Club’s recently renovated town house at 22 E. 35th St. in New York City. The organizations, two of the country’s most respected philatelic institutions, are joining forces beginning Dec. 1 to serve the stamp hobby.

The joint announcement was made by Mark Banchik, president of the Collectors Club, and Larry Lyons, executive director of the Philatelic Foundation.

The Collectors Club was established in 1896 by 100 stamp collectors, including John Walter Scott, the founder of the Scott catalogs.

The club’s membership roll through the years has included many of the hobby’s elite collectors, including Alfred Caspary, Col. E.H.R. Green, Theodore Steinway, Alfred Lichtenstein, and President Franklin D. Roosevelt.

Lichtenstein was instrumental in the club’s acquisition, in 1937, of its current home.

The historic building is a five-story town house located in the Murray Hill neighborhood of Manhattan. The building was designed by American architect Sanford White (1853-1906), whose architecture was honored with a United States 18¢ stamp (Scott 1928) issued in 1981, as part of the American Architecture series.

The PF, which will occupy two floors of the clubhouse, got its start in 1945 and has served the hobby well as one of the world’s leading expertizing organizations. The PF is returning home to the clubhouse, where it was established 72 years ago.

The education institution has a team of in-house stamp experts; a research library; state-of-the-art, high-tech electronic equipment; the largest collection of United States fakes and forgeries; and a website that offers a searchable database of more than 500,000 PF certificates of authenticity available for review.

According to the announcement of the agreement to share space, the PF “is the only expertizing service in this country to use the latest hi-tech electronic equipment including both the VSC6000 and the Bruker XRF Spectrometer.”

The Collectors Club has almost 800 members. Its philatelic library, estimated to include about 150,000 volumes, is available to collectors, at no cost, for research. The club offers a monthly speakers programs, and rooms for meetings and stamp auctions.

Banchik said that he is “looking forward to the steady stream of visitors to the PF’s offices who will see, firsthand, our clubhouse and the many benefits of membership in The Collectors Club as well the opportunity for our members to access the PF’s reference collections while conducting research activities.”

Philatelic Foundation chairman Robert G. Rose said, “We at the PF look forward to a growing synergy between our two organizations which we expect will benefit all of philately in this country.”